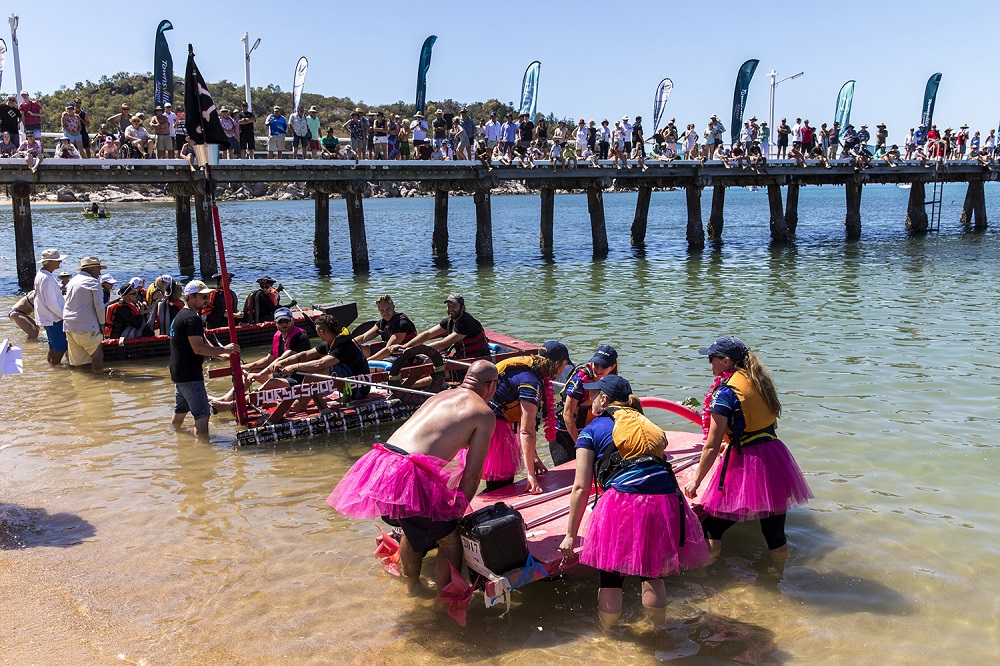 Racing took a backseat at SeaLink Magnetic Island Race Week yesterday, as competitors got into the Father’s Day fun on Lay Day, including the popular Rotary Beer Can Regatta, mud crab races, the Artisan markets and more at beautiful Picnic Bay on a bright sunny day.

Today is a different matter, with racing back in the spotlight and a light breeze not expected until lunch time. At 10am crews were waiting ashore with an AP flag (postponement signal) flying as they awaited further news of a start time.

“A late sea breeze, – 12 maybe 12.30pm at 10 to 11 knots,” surmised Principal Race Officer, Denis Thompson as he and the race management team sat working on courses for the seven divisions taking part in the Townsville Yacht Club hosted event.

This morning sailmaker Ian MacDiarmid was repairing a jammer on his F36 Razer, Hellrazer, ahead of the race. He currently leads SeaLink Spinnaker Division 4, with third and second places, and was mulling over the first two days of racing.

“If you go the right way in light breezes, you’re OK. So far we’ve had a few plusses and a few minuses. In the first race others got into the shift first and we were dog meat, but we made up for it later,” the NSW sailor said.

“We had a fabulous second race with Calypso Magic (Graham Turner’s Farr 30 from the Australian 18 footers League) the whole course. The Young 780 (Guilty Pleasures VII did a great job too.”

MacDiarmid sold his loft to Doyle’s Shane Guanaria, but still dabbles – and a good sailmaker never forgets his craft or how to trim. It all helps: “I’ve got the cheapest sails here. Shane lets me use the loft and I appreciate his support,” MacDiarmid ended.

On Lynda Sawbridge’s Helena May, crew member Rick Telfer said, “Apart from the lack of breeze, it’s been a good regatta. I love racing here, it’s my sixth time. I sail on different boats as my work schedule doesn’t allow me to commit to racing full time.

“We’re in Division 1 and in the light stuff we’re not competitive with them,” he says from the local Bavaria 38. “We’d love a bit more wind,” ended Telfer, who speaks for most of the fleet.