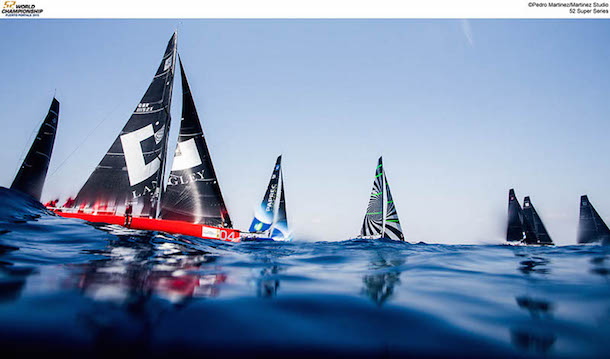 Carrying a 14 points lead going into the final day of the TP52 World Championships, Azzurra need only two solid results Saturday to be sure of collecting the title. But so intense and closely matched is the 12 boats fleet racing in these sea breeze conditions on the Bay of Palma, Mallorca, the outcome is not yet certain, as Azzurra’s skipper-helm Guillermo Parada cautions:

“It is not over until it is over.”

Azzurra’s 5,3 for the day held intact the same 14 points margin that they had started Friday with, now having held the overall lead for three days. That they were beaten twice today by the defending champions Quantum Racing’s 4,2 heated up the rivalry which has been on the back burner a bit this regatta, but the American flagged team moved up to second overall having been languishing in ninth overall two days ago. And fiercely superstitious Italian tactician Vasco Vascotto was pleased to ride out Friday 17th (which compares with the Anglo Saxon Friday 13th) with no disasters.

Top performers of the day were Niklas Zennström’s Rán Racing. The winners of the Valencia regatta in May bounced back from Thursday’s painful 21 points stinker to pair together a 2,1 and promote themselves to fourth overall, two points behind Harm Müller-Spreer’s Platoon which won the first of today’s two windward-leeward races which were both contested in 8-12kts sea breezes.

The team which is leading the title charge are resolute that they will change nothing on the final day. Azzurra skipper Parada said they stuck by their ‘blue book’ today, working to their usual, hard wired routines and belief systems that have served so well for them so far, and will stick by their processes Saturday. First race today they did have to recover from tenth at the first top mark to rescue a fifth, even if they were passed by Quantum Racing down the final run relinquishing fourth. And second race Azzurra were again passed by the 52 SUPER SERIES champions battling it out in the wake of Rán Racing over a course which was marked by a big shift in the breeze to the left.

Platoon’s Markus Wieser and Seb Col along with Morgan Larson and Adam Beashel on Rán Racing called the first beat of Race 7 best, working the right hand side closest to the land effect which creates a starboard tack lift. Platoon won handily with Rán second and Allegre third. Key was the choice of the right on the upwind, a decision Rán’s navigator Steve Hayles explained:

“ We had a long line up and had a long chat about our history here as a team and we have done a huge amount here and on this occasion it was right. But that does not make us smart. We got plenty wrong yesterday but we were strong on that side, we made a good call.”
“ It is very subtle. It is not about 20 or 30 degree shifts it is about three or four degrees here and there and a little more pressure. But we had sailed a long way up there and looked at the computer track and what people thought. But we are not trying to be clever because we got it hopelessly wrong the day before.”

Of their rollercoaster ride 21pts Thursday and three today he said:

“ We were ninth overall after yesterday. We had doubled our score in just one day. It is very, very tough here, but we know we are a good team, we won the first event and obviously today was fantastic. But we are a good team at bouncing back. The key is not to change too much. The key is to come out and trust yourselves as a team which is good, which has a history and all the work that has gone into making it good.
For sure everyone will be a bit more upbeat, a bit more chirpy tonight. You can’t change that. It is human nature. Yesterday there was some honesty but really everyone wanted to get to bed and forget about it and start a new day today.”

Meantime as they contemplate what would be their first world title as Azzurra – although many crew won as Matador in 2009, and a world title which would rank as tactician Vasco Vascotto’s 25th major world title, Azzurra’s Parada concludes:

“We will stick to our rules to go racing just like it was the first day of the regatta, keeping an eye on our closest rivals not just for here but for the season overall. It is a little bit of a cushion but it is not over until it is over.”