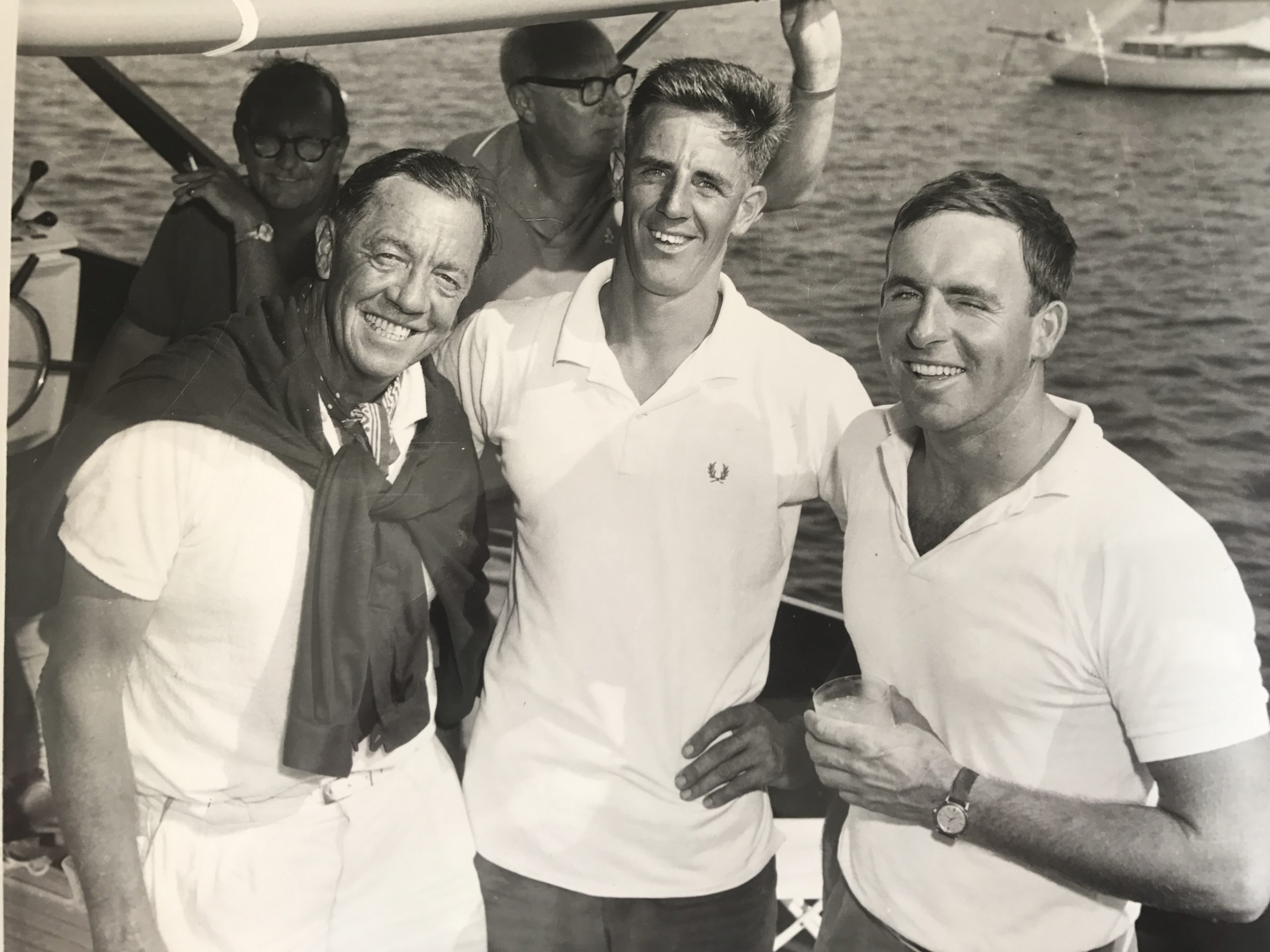 “The achievement of Bill Northam CBE, Pod O’Donnell and Dick Sargeant in winning Australia’s first Olympic sailing gold medal in the 5.5mR class at the Tokyo Olympic Games. opened up a world of opportunity for generations of Australian Olympic sailors to come,” said the Australian Sailing Hall of Fame Selection panel.

When the trio won their Olympic gold medal, Northam, the skipper, was 59 and the grandfather of five, the oldest Australian ever to have won an Olympic Gold medal.

Northam only started sailing at the age of 46.  After winning the Sayonara Cup in 1955 and 1956, Northam then had many successes with Caprice of Huon in the Sydney to Hobart Yacht Race and raced the Sabre class Jazzer.

In 1963 Northam decided to set himself a new challenge, the Olympics. He went to the United States, sought out naval architect Bill Luders, and had him design the 5.5 metre craft he called Barranjoey – in a misspelt homage to the northern beaches headland in his native Sydney. He asked accomplished sailors, O'Donnell and Sargeant, both more than 30 years younger than him to join him, and entered the 1964 Australian titles and Olympic trials, against skippers like Jock Sturrock and Norman Booth.

Although Barranjoey and its crew won the championship and Olympic selection, then another set of challenge races, Northam continued to have his detractors.  Some said he was too old, and many pointed out that Jock Sturrock had solid Olympic experience, having previously been to four Olympic Games. However, Northam, O’Donnell and Sargeant had won the Olympic trials and therefore earned the right to compete for Australia in the 1964 Tokyo Olympic Games.

Northam marched in the Tokyo opening ceremony with his son Rodney, a member of the rowing team. No father and son had previously represented Australia at the same Olympics; this time two pairs did – the Northams and the Roycrofts, Bill and Barry (Equestrian).

With Northam as helmsman, Sargeant the for'ard hand and O'Donnell on the main sheet, Barranjoey made its mark quickly at the Olympic regatta, with a win in the first race. McNamara, the danger man from the United States, finished 10th in the first race, and Northam couldn't resist the temptation to heckle.

McNamara went on to win the next two races in 'Bingo'. The Australian team won the fourth and sixth races. With the final race to go, Australia had 5407 points, the United States 5106. McNamara could take the gold only if he won, and Barranjoey finished worse than fourth.

After the Tokyo Olympics, Northam was honoured as Australian Yachtsman of the Year. In 1966 he was made Commander of the Order of the British Empire in 1966 and in 1976 was knighted for his distinguished services to the community.

Northam, O’Donnell and Sargeant were also all involved with the Jock Sturrock-skippered Gretel when it challenged for the America’s Cup in 1962.

Although he did not attend another Olympic Games after Tokyo, O’Donnell continued his involvement with the Australian and international sailing world in the ensuing decades.  He won the 1974 world championship in the 5.5-metre class, with Norman Booth and Carl Ryves.

In 1980, O’Donnell won the International Etchells 22 world championship, with Richard Coxon and Dick Lawson, and was Australian Yachtsman of the Year in 1979-80.  O’Donnell and Coxon were selected to go to the 1980 Moscow Olympics in the Star class, but the sailing contingent withdrew from the Australian team due to the proposed boycott.

After Tokyo, Dick Sargeant also continued to sail at the highest level for many decades. In 1968 he competed at the Mexico City Olympics, where he and Carl Ryves sailed their Flying Dutchman class boat into fourth place, an agonising 0.7 points off a medal.

Barranjoey, the boat that Northam, O’Donnell and Sargeant sailed to victory in Tokyo, is on display at the Australian National Maritime Museum in Sydney.  More information on Barranjoey is available at http://arhv.anmm.gov.au/objects/132337

Seven Hall of Famers will be inducted at the inaugural Australian Sailing Hall of Fame induction ceremony on Friday 3 November at the Hyatt Regency, Sydney.