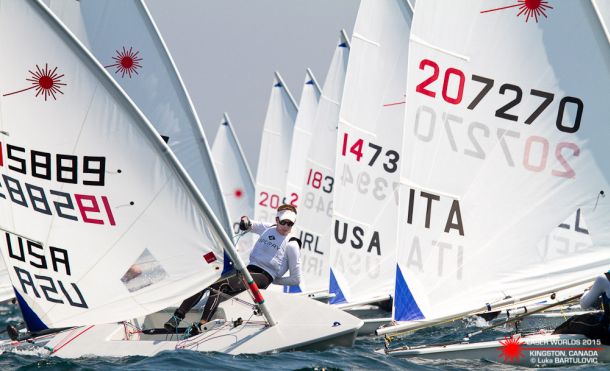 Day 2 of the Laser Radial Youth World Championships. 195 Sailors hit the water this morning with 6 knots of breeze. After a short postponement while the wind picked up and steadied, all fleets were off with 8-10 knots of breeze from the South West. All sailors completed two races, and are scheduled for another two tomorrow.

In the male division, Australia’s Conor Nicholas continues to lead the fleet overall. Nicholas placed 23, 1, today, dropping his 23, to stand with a nett of 5 points. He is followed by Italian Umberto José Varbaro, who placed 1,6 in today’s races. Varbaro dropped his 6, to sit 2 points behind Nicholas at 7 nett points. Ismael Iess Falcón, Spain, moved up to third overall, placing 1,5, in today’s races, with Paolo Giargia, Italy, moving down to 4th, after placing 5,22, today. Roberto Pollara, Italy, moves up to 5th overall with a 6,3, today, followed by Gianmarco Planchestainer, Italy, in 6th, who placed 4,1, today. Canadian Matti Muru moved up to 7th, with a result of 7,3, today. Nic Baird, United States, now sits in 8th overall, with Alexis Mégevand, Switzerland, in 9th and Philippe Pasquin, Canada, in 10th.

In the female division, Mária érdi, Hungary, continues to lead. érdi placed 12,1, today, and dropped her first race of the day to sit with 3 nett points. Close on érdi’s tail is Dolores Moreira, Uruguay, who placed 1,2, in today’s races. Francesca Bergamo, Italy, moved up to 3rd, placing 5,3, today. Magdalena Kwasna, Poland, moved up to 4th, with Carly Broussard, United States, moving down to 5th.

Sailing continues tomorrow with 2 races scheduled. Following tomorrows racing is the competitor and coach dinner at the Kingston Yacht Club. Racing continues daily until August 20th, with the first warning scheduled for 1130.

For a full set of results: http://kingstonlaserworlds2015.com/results/