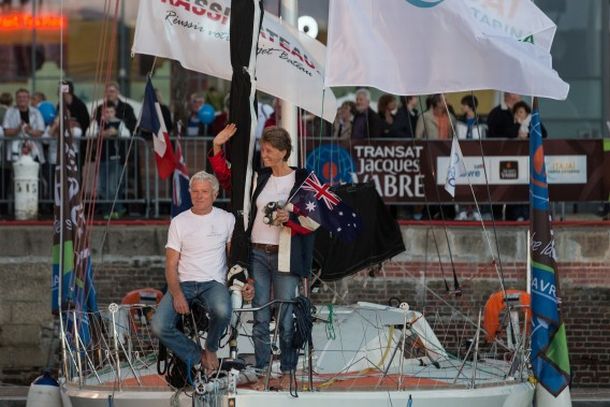 Michelle Zwagerman and Patrick Conway waiting for the start of the Transat Jacques Vabre.

Patrick Conway has returned to the French short-handed sailing scene, this time on a smaller budget and therefore a smaller yacht. Pat is participating in this Sunday’s Mini Fastnet race out of Douarnenez, Brittany

The Mini 6.50 class is extremely competitive and is used by most up-and-coming young sailors as a step up to the bigger racing yachts. A Mini is designed for planing and can reach speeds of up to 25 knots. Not bad for a 21 footer! There are only two divisions: production or prototype.

Despite being the oldest competitor, Pat is still hoping to show those young ‘whipper-snappers’ a thing or two. Given that Pat only stepped onto his chartered Production boat 523 Matador this week, he’s not expecting too much this race. However, if he likes it, then he may buy himself for his 70th next year an entry into the Mini Transat.

Pat, and his wife Michelle, completed the Transat Jacques Vabre in 2013 on a Class 40. After many years of sailing in all parts of the world, the competition here in France is to Pat’s liking. So he has decided to return for one more campaign.

Pat is joined for this race by a young Italian co-skipper Alessandro Torresani. Ale just completed his first solo race, the Mini MAP, on Matador the previous week. Also coming along for the ride is our mascot koala and in keeping with the downsizing, a mini version.