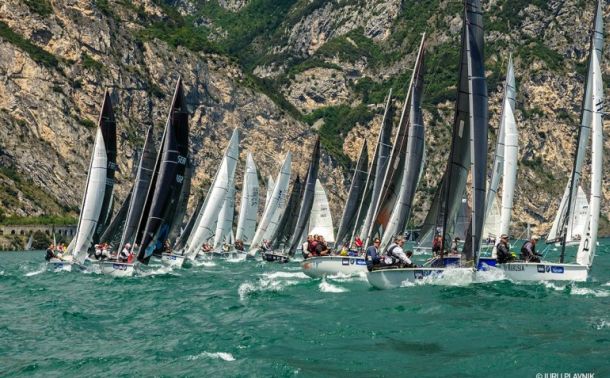 The SB20 fleet on a close reach on Lake Garda. Photo sportsboatWorld.com

All five Australian boats have qualified for the Gold Fleet at the Trentino SB20 world championship being sailed from Torbole on Italy’s Lake Garda following the completion of six races in ideal sailing conditions.

National champion Glenn Bourke, helming Victorian Robert Jeffreys’ Red from Sandringham Yacht Club, is the top-placed Australian lifting the boat’s overall place from 14th to ninth overall in the 98 boat fleet. Overnight Bourke sailed Red to a 3-10-4 result, giving them a net 30 points after one discard.

Chris Dare, skippering Flirtatious, from Victoria’s Sorrento Sailing and Couta Boat Club, had a frustrating day, starting with a 28th and then a 27th before recovering with a fifth in race six. Unfortunately, this has seen Dare drop from third overall at the end of day one to 15th overall on 42 points.

Tasmania’s Michael Cooper’s Export Roo, representing the Royal Yacht Club of Tasmania, maintained overall 12th place on 38 points, starting day with an 18th, followed by a 12th and a third.

Stephen Fries’s Wysiwyg from Sandringham Yacht Club began day two with an 11th but then notched up two 20th places to be 24th overall on 68 points.

The second Tasmanian boat, Phil Reid’s Mind Games, appears to have made the cut into the Gold Fleet, placed 46th overall after six races, finishing second in race 4, followed by a 21st and a 28th for a net 103 points.

Three races completed on Day 2 (July 7) of the 2015 Trentino SB20 World Championships, with the 98-boat fleet now divided into ‘gold’ and ‘silver’ fleets, determining who can challenge for the title. But there’s nothing to split the leaders, with two teams tied on points after six races.

Torbole provided more classic conditions at Lake Garda for the second day of the world championships, with the famous south to south-westerly afternoon ‘Ora’ breeze allowing six more races to be held, three each for the two qualifying fleets.

The qualifying series is now over and one discard comes into play. Eight more races are scheduled – with just one discard allowed from the final races: there is no room for error over the next three days.

With the Gold fleet leaders vying for the title of 2015 SB20 World Champion. competition couldn’t be tighter, with the lead two boats each tied on 12 points apiece.

Roger Hudson’s South African Race Ahead – Spirit of Cape Town had a super-consistent day, scoring a fourth and two seconds, while the French youth team Give me 5 from the FFV opened their day with a win, and went on to score another second and fourth.

Day one leading skipper Iain Ainslie, steering an Italian boat has slipped back to third overall on 17 points.