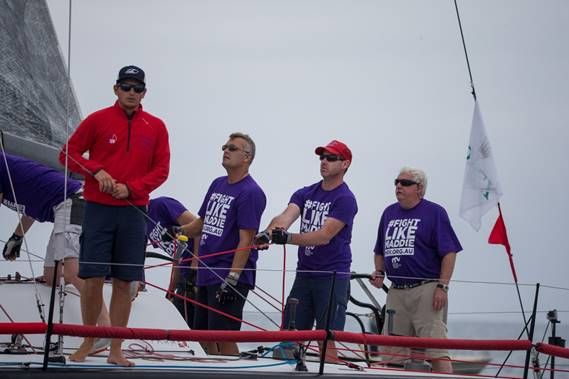 Santa Barbara, Calif. (19 August 2015) – The day started out foggy, but not the 15 teams that today started racing for the 2015 Rolex Farr 40 North American Championship title. Their focus, in fact, could not have been sharper, and, with three different winners in as many races, the competitiveness for which the class has a well-deserved reputation was in full evidence. The competitiveness and high level of performance are in complete alignment with the core values of Rolex, title sponsor of the North American and World championships since 2001.

After a delay ashore, and an on-the-water postponement, racing was underway in hazy conditions with a six to seven knot breeze. Bragging rights as winner of the first race of the series were earned by Kevin McNeil on Nightshift. McNeil moved to the lead position of the race at the second mark, and held on to cross the finish ahead of Lloyd Clark’s Australian-flagged Voodoo Chile, and New Yorker Alex Roepers, the defending Rolex Farr 40 North American Champion, on Plenty.

For McNeil, this was his first race sailing with 1997 Rolex Yachtsman of the Year Chris Larson as his tactician. McNeil and Larson are both residents of Annapolis, Maryland, and have raced against each other many times. McNeil was pleased with the way the day went and gave due credit to Larson’s calm demeanor.

“Conditions were a little atypical of Santa Barbara,” said Larson. “It was a little light and shifty and the right wasn’t always the right way to go but we had a great day winning the first race. I think Kevin and I could be Felix and Oscar but he’s a fantastic helmsman and gets the boat around and he’s not afraid of being in traffic. In the other races we had okay starts, but weren’t able to hold our lanes off the line as long as we would have liked. I think, unless it starts blowing 15+ knots, it’s going to be a pretty mixed up and competitive event. A lot of good teams put the time in this year to start peaking and I think you’re seeing that in the results.”

“It must have been a good tactician [David Chapman] telling me where to go,” said Clark of his consistent performance on the water which also put him in the position of leading the Corinthian standings after three races. “It was pretty challenging,” added Clark of the conditions. “It was quite light and filled in a little as the day went on. I was just going where I was told to go and doing what I was told to do. I’d normally say I’d prefer a little more breeze, but when you look at the scores today we did pretty well in the lighter more fickle stuff. When we did get a little more breeze in the last race we just got on the wrong side of it early and found it hard to fight back from the middle.”

The cumulative effect sees Alex Roepers, the defending Rolex Farr 40 North American Champion, holding the top spot on the leaderboard. Plenty has 10 points and is followed in the standings by Schaefer’s Struntje light with 12 points. One point back is Clark on Voodoo Chile with 13 points; Jahn and Flash Gordon follow with 14 points. Tied on points is McNeil’s Nightshift and Rossi’s Enfant Terrible, each with 16, while Martin Hill’s Estate Master is at 17 points for seventh overall in the 15-boat fleet.

Additional information on the 2015 Rolex Farr 40 North American Championship, including daily race reports, full results and photos will be found online here. Follow the event via Twitter or on Facebook.