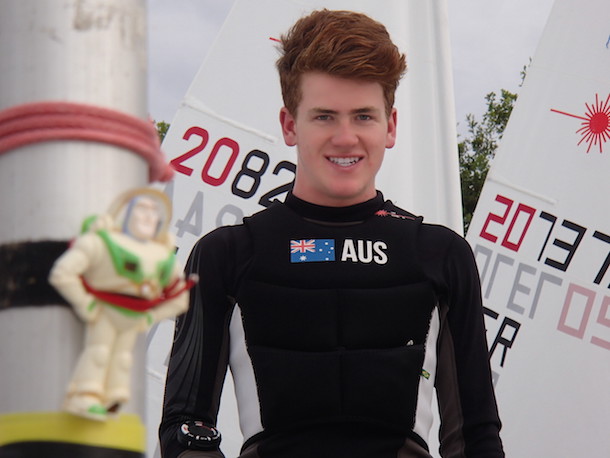 Sam King has left his best result to the final race of the Laser 4.7 world youth championships at Medemblik in The Netherlands, finishing second in the Gold fleet’s 11th race and 25th overall.

The Tasmanian champion and Royal Yacht Club of Tasmania Off the Beach sailor also ended sixth overall in the Under 16 group in this, his first world championship,  contested by more than 260 talented teenage boys from around the world.

European sailors dominated top medal placings in the regatta which was sailed mostly in light breezes,  with the Australians at their best when the winds reached 15 knots.  King’s best placings were a second and a third and he finished in the top 15 in five races.

The huge fleet was divided into four fleets after qualifying races with fellow OTB sailor Josh Ragg finishing third overall in the Emerald fleet, just one point behind the second placegetter.

Top-scoring Australian in the boy’s Gold fleet was West Australian Zac Littlewood who slipped back on the final day with a 33rd place to be 11th overall. Caelin Winchcombe, also from WA, finished 18th overall with a last race 20th place.  Littlewood  also finished second overall in the under 16 group.

The championship went to Spain’s A Bethencourt Fuentes.

In the girl’s championship, WA’s Zoe Thomson won three of  her 11 races but with a 12th in the last race saw her remain at sixth overall.