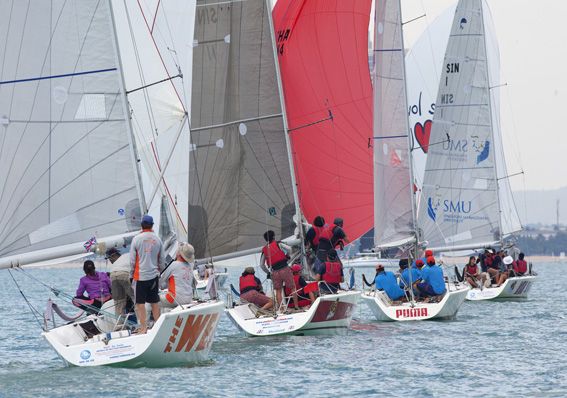 The 11th Top of the Gulf Regatta Presented by Ocean Marina kicked off with an official opening ceremony last night presided over by Khun Rattanachai Suthidechanai, Pattaya City Council member, who together with regatta executives welcomed more than 600 sailors to compete in seven classes over four days in the Gulf of Thailand.

As the boats headed out for the first day of racing an onshore storm was building. On the keelboat and multihull courses Principal Race Officer Denis Thompson got the fleet into sequence and underway on a windward/leeward course in a moderate breeze.

IRC Racing 1 saw some close competition in the first race of the day with the top three boats separated by less than three minutes on corrected time. The first win of the series went to EFG Mandrake (HKG), who competing for the first time at the Regatta laid down their marker early. A little over 10 seconds was the difference in Race 2 as EFG Mandrake had to settle for second place behind Kevin Whitcraft's Wan Ma Rang (THA).

In IRC Racing 2, Magic (AUS), with two consistent second placings in today's races, means they lead the class. The honours of the individual races were shared, with another Australian entry, Iolanthe (AUS), scoring the win in Race 1 and Amanda (SWE) the win in Race 2.

In the American-dominated Cruising class it was the smallest in the fleet, the 22-foot Tai Two, that put in the best performance to score two bullets and edge out a lead at the top of the standings. Two second places for Nautical Wheeler (USA) and two third place finishes for Amore (USA) leaves them sitting in second and third overall, respectively.

The prestigious Coronation Cup, competed for by the one-design platus, delivers some of the closest racing of the Regatta and with top sailors from Thailand and overseas lining up it looks set to be a tough battle.

Despite the tricky winds, defending champion Scott Duncanson (AUS) fought his way into a fourth place finish in Race 1 while a former Cup winner, Chris Way on Easy Tiger IV (AUS), took the first bullet of the series. Duncanson improved with a third place in Race 2 – while The Fox (HKG) took the Race 2 honours – and went on to win the third race of the day leaving Duncanson and crew on Kingdom Properties second overall behind the Thai crew on Le vent 2 who placed second in all races today and leads the standings. A first, seventh and third was enough for Chris Way to hang onto third place overall.

The multihull class was dominated by Thai sailors on Day 1 with Radab Kanjanavanit's Cedar Swan (THA) winning both races to lead overall and Kirati Assakul's Sonic (THA) scoring a 2,3 to sit second overall ahead of Australian Brett Dryland and his crew on License to Chill (AUS).

The 110-strong Optimist fleet, competing in the Thailand National Optimist Championships, completed two races today, the results of which will see the fleet split into two going into the second day of racing. At the end of Day 1 it was Thai national team sailor Suthon Yampinid leading the scoreboard with a 1,2 scoreline ahead of Malaysian sailor Muhammad Fau Zi.