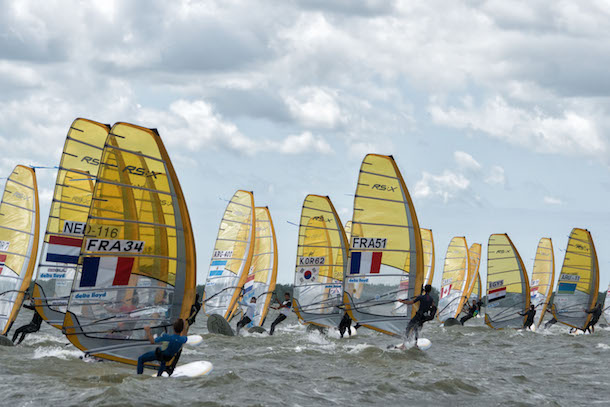 It was a strong-wind opening day for the 700 boats competing at the Delta
Lloyd Regatta in Medemblik, Holland.

In the women's skiff, the 49er FX, Dutch team Annemieke Bekkering and
Annette Duetz blasted around the course with incredible consistency, racking
up 3,3,3 to lead the regatta, although the Aussie team in 2nd place, Tess
Lloyd and Caitlin Elks, also sit on 9 points with scores of 1,4,4.

It's a similar tie-break story at the top of the men's 49er leaderboard; New
Zealand's young team of Marcus Hansen and Josh Porebski hold the lead in the
men's skiff fleet, but on equal points in 2nd place is Australia's Joel
Turner and Lewis Brake. Near the back of the fleet, but not surprising after
their first day ever of competition in the highly challenging 49er, is the
team from Oman, Musab Al Hadi and Hashim Al Rashdi. “If we can get round the
course, and not crash into anyone, we'll be happy,” said Al Hadi, although
he was disappointed to finish outside the time limit of the final of their
three heats, after multiple capsizes on the last leg of the race.

Part of the challenge of racing on the IJselmeer is that the shallow 5-6m
waters generate a short choppy wave pattern that makes it very easy to stick
the nose of a fast boat like the 49er into the back of the wave, resulting
in pitchpoles and capsizes. It's a similar problem for the high-speed
catamaran, the Nacra 17. However this didn't upset the World No.1s from
France, Billy Besson and Marie Riou who dominated the multihull fleet with
1,3,1 scores, sitting 10 points in front of Great Britain's Ben Saxton and
Nicola Groves in 2nd place just ahead of Olympic medallists from Australia,
Darren Bundock and Nina Curtis.

Matthew Wearn from Australia did well in his side of the three-way draw in
the 162-boat Laser qualifying fleet, with scores of 1,2 leaving him well
placed after day one. Rutger van Schaardenburg is the top Dutch sailor in a
very competitive home fleet, lying 2nd overall with a 4,1 score. In the
women's singlehander, the Laser Radial, Ireland's Annalise Murphy hammered
home her traditional big-breeze advantage to win the first race of her
qualifying group. On the other side of the draw, Olympic silver medallist
Marit Bouwmeester from the Netherlands won her race at a canter, easily
justifying her early selection to the Olympic team for Rio 2016.

In the 470 divisions, Finland's Niki Blassar and Mikaela Wulff lead the
women's fleet, and Korea's Kim Chang-Ju and Kim Ji-Hoon lead the men.
Pieter-Jan Postma didn't have it all his own way in the Finn singlehander,
although the Dutchman still looked impressive on home waters to lead with
scores of 3,1. “When it's windy and shifty like that, and with the waves on
the IJselmeer, it can be tricky for sailors visiting here, but they are
learning quickly,” he smiled. “I won't be sharing any local secrets with
them, they are working it out already!”