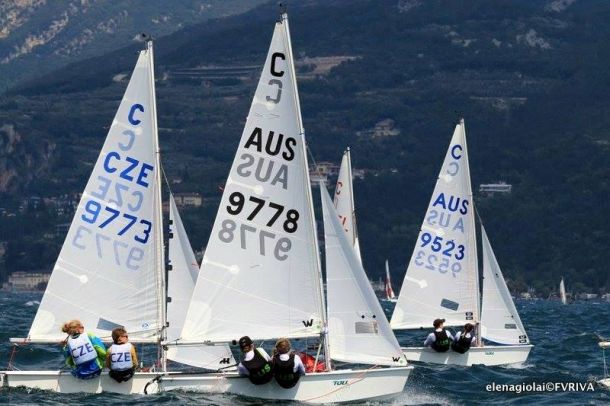 In Britain more than 500 International Cadet dinghies are raced regularly in fleets around the UK. In Australia the number is probably between 50 and 60; in Hobart the regular racing fleet is around 12-15 boats, all sailing out of Sandy Bay Sailing Club.

Yet two of the three Hobart crews among the seven crews representing Australia at the 2015 Cadet world championship are holding second and fifth place overall after eight of the scheduled 12 races being sailed on Italy’s Lake Garda.

The Australian and British teams each hold four places in the top ten, with the British crew of Jamie and Bettina Harris in first place and now 10 points clear of Sam Abel and Hugo Allison from Sandy Bay Sailing Club.

The British crew scored two seconds on day three overnight, following their three straight wins on day two and have a net score of 14 points. The Tasmanians are on 24 points. They began day three with a third place in race seven to maintain their excellent consistency but in race 8 they finished 18th, which is now their discard race.

Two other British crews are in third and fourth place with Angus Price and Archer Ibbott, also from Sandy Bay, holding fifth overall in the 58 boat fleet with a 5-7 score on day three.

In eighth and ninth places respectively are Marty Hood and Jack O’Donnell from Port Lincoln Yacht Club and Australian champions Julian Sasson and Mischa Suda from Sandringham Yacht Club. Hood and O’Donnell placed 13th and 40th to be on 72 points; Sasson and Suda had two 12th places and have a net score of 77 points.

In 14th place overall are William and Laura Cooper, the third crew from Sandy Bay, who finished 37th in race seven but improved with a 15th in the final race of the day.

Oliver Manton and Benjamin Garner from Royal Geelong Yacht Club moved up to 20th place with a 23rd and a best so far finish place of eighth while club mates Dominic Randall and Ella Purnell slipped to 27th overall with a 28-42 scorecard.

The young sailors now have a day off from sailing before two more races scheduled for each of the final two days of the championship.