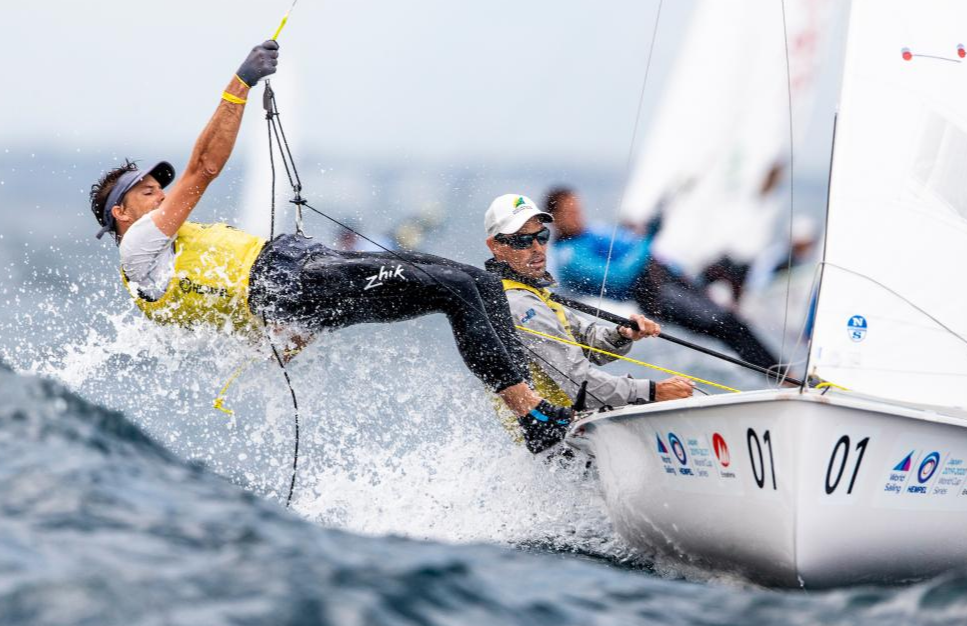 The Men’s and Women’s 470 fleet are sailing their third consecutive regatta in Enoshima, Japan; their World Championships concluding on 9 August before Ready Steady Tokyo before the Olympic Test Event, and now the first regatta of the 2020 Hempel World Cup Series.

Australia’s Mat Belcher and Will Ryan won gold at both events and were followed by Spain’s Jordi Xammar and Nico Rodriguez and Sweden’s Anton Dahlberg and Fredrik Bergström on both occasions.

They resumed their battle on Friday 30 August as big winds gusting in excess of 25 knots from the south west and pounding waves hit Enoshima once again.

As per the last two events, the advantage is with Belcher and Ryan who recorded a pair of seconds. They lead on nine points. The Spaniards finished fourth and first from the two races today and are second on 23 points. Dahlberg and Bergström sailed their way to their third and fourth consecutive third place finish to sit third on 27 points.

Across Belcher and Ryan’s five week trip the pair have found their rhythm and are enjoying the competitiveness their closest rivals have brought.

“Both teams have always been up there to be honest,” Belcher commented.

“We’ve had some really close battles in the past, notably with the Swedish a couple of years ago at the World and European Championships. They are extremely talented and always in the mix. They are great all-round sailors. The same for Jordi and Nico. They’ve really picked it up recently in strong breeze but might have gone down a bit in lighter wind.

“It’s a great battle. That’s why we do it. It’s not interesting if it’s not difficult and we’re really all enjoying racing against each other.”

Belcher and Ryan consistently raise the bar in the Men’s 470. Together they have won five World Championship titles and an Olympic silver medal. Belcher has an additional three world titles and a London 2012 Olympic gold medallist.

Belcher acknowledges that because of their success, teams will often draw comparisons and look to imitate, “It’s quite a big difference psychologically between our program and their program,” he continued, “but I am sure they are using us as the benchmark.

“For us, we know where we need to get to. What’s really nice about this campaign is that we’re focusing on the Games. We have got all our things sorted now and we’re long-term focused. That’s going to put us in a good position so we know where we’ve got to get to.

“We’re working hard to keep redefining, keep improving, staying focused on us and hopefully that will be enough.”

Three Men’s 470 races are scheduled for Saturday ahead of their Medal Race on Sunday.

Italy’s Elena Berta and Bianca Caruso dislodged Nia Jerwood and Monique de Vries (AUS) at the top of the Women’s 470 following a first and a fifth from their two races.

However, the Italians are just one point ahead and the top five are all close by after they all posted single digit scores.

Benedetta di Salle and Alessandra Dubbini (ITA) were the standout performers in the Women’s 470. They recorded a second and a race win and are just a single point off Silvia Mas and Patricia Cantero Reina (ESP) who occupy the final podium spot.

Just a one race was completed in the 49er and the win went the way of Benjamin Bildstein and David Hussl (AUT). The 49er started a second race but the wind soon picked up, resulting in capsizes that saw the race abandoned and the fleet return to shore.

The Austrians race victory pushed them up into third overall. “We were happy to get out,” commented Bildstein. “The wind looked nice at the beginning. We had a fun, three lap race. It was hard for the crew but it was good fun and a good fight. We got up into first after a good downwind.”

Tim Fischer and Fabian Graf (GER) sailed their way to a ninth. On 33 points, they are seven clear of Dominik Buksak and Szymon Wierzbicki (POL). The top six are all tightly bunched and Bildstein is looking forward to taking on Saturday’s Medal Race. “It will be close because we have some missing races. The top guys are really close so there’s going to be a lot of action. A lot of good teams are fighting for medals so everyone should watch it.”

As the 49er fleet came ashore, the Nacra 17 and 49erFX were postponed for the day, meaning the top ten stand and will advance to tomorrow’s Medal Races.

In the 49erFX, Annemiek Bekkering and Annette Duetz (NED) have the advantage heading into the Medal Race, topping the leaderboard on 19 points. Julie Bossard and Aude Compan (FRA) follow on 27 points with Anne-Julie Schütt and Iben Nielsby Christensen (DEN) on 33 and Alex Maloney and Molly Meech (NZL) on 34.

The two Australian teams of Jason Waterhouse and Lisa Darmanin as well as Nathan and Haylee Outteridge are two points off. Ruggero Tita and Caterina Marianna Banti (ITA), Quentin Delapierre and Manon Audinet (FRA) and John Gimson and Anna Burnet (GBR) are also firmly in the hunt.

Two races were completed in the Women’s RS:X and Ready Steady Tokyo winner Yunxiu Lu (CHN) is poised to claim a second consecutive gold medal. A fourth and a second have given her a 13-point advantage over Katy Spychakov (ISR) going into the Medal Race.

A seventh or better will ensure Lu claims the double. Spychakov has a nine point advantage over Zofia Noceti-Klepacka (POL). Charline Picon (FRA) and Emma Wilson (GBR) are within touching distance of the Polish racer in fourth and fifth.

Le Coq holds the lead on 43 points with Bi on 45, Giard on 46 and Cho on 49. Although it may not be a straight shootout, winning the Medal Race will go a long way in deciding the gold medallist.

Nicholas Heiner (NED) excelled once again in the Finn fleet. He won both races to go 14-points clear of Joan Cardona Mendez (ESP). The Spanish sailor struggled on Thursday in the strong breeze but found form on Friday posting a 2-4 to move back onto the podium.

Ioannis Mitakis (GRE) and Josip Olujic (CRO) are tied for third. Saturday will see three further races to confirm the Medal Race line up and decide who, out of China, Hong Kong and Iran, will claim the Asian Tokyo 2020 Olympic quota place.

Cyprus’ Pavlos Kontides opened up a 23-point lead over his rivals in the Laser as his consistency paid off on the race track. Kontides, London 2012 silver medallist, finished fifth in both of his races and has a strong advantage over Matt Wearn (AUS) who posted a fourth and a race win.

Kontides is the only sailor who holds single point results from all seven races. His 20-points have given him some breathing space going into Saturday’s final day of fleet racing but he’ll know not to be complacent.

Wearn is second on 43 points and has Jean Baptiste Bernaz (FRA) following on 45, Tonci Stipanovic (CRO) on 46 and Hermann Tomasgaard (NOR) and Jesper Stalheim (SWE) on 49.

Medal Races in the 49er, 49erFX, Nacra 17 and RS:X fleets will commence from 1200 hours onwards. All remaining fleets will sail an extra race to catch up on races last the days prior.

The 49er, 49erFX, Nacra 17 and RS:X fleets will conclude racing on Saturday 31 August with their Medal Races – view here: https://youtu.be/XOPsr6uWWto from 12:00 local time.