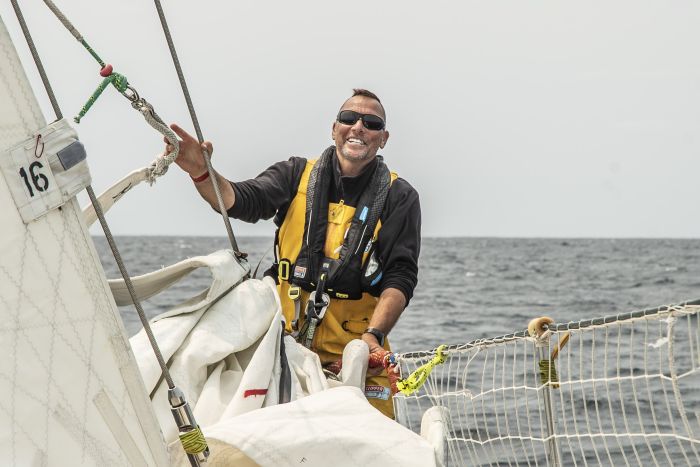 John Broomfield working on the bow of Ha Long Bay

The global sailing race which empowers anyone from teachers to chiropractors, and from teenagers to septuagenarians, to become ocean racers, has just finished its Coast to Coast stage around Australia. And the team with most Aussie’s onboard took the top spot.

Sixteen Australians participated in the fourth stage of Clipper Round the World Yacht Race, which took them from Fremantle to the Whitsundays including; Donna Von Tunk, from Melbourne, circumnavigator on Qingdao, Jacqui Webb from Portland, Victoria, circumnavigator on Ha Long Bay, Viet Nam and Philip Siddle from Kiels Mountain, Queensland, sailing round the world on Qingdao.

The atmosphere reached fever pitch in the last 24 hours of the race as Leg 4 had been one of the most tactically fought to date. The Australian Coast-to-Coast Leg has been a thrilling competition with crew battling a full variety of conditions on the 3,415 nautical mile race.

The boat which crossed the line first, with line honours into the Whitsundays, was Ha Long Bay Viet Nam which has five Australians on board. The boat arrived into the Queensland town on 10 January 2020 at 09:23:49 UTC after 19 days at sea. But they had a tense 48 hour wait until last night when, at the Whitsundays prizegiving, it was announced that the team had done enough to hold off competitor Unicef, racing on 48 hours of elapsed time. This meant they won the fifth race of the global circumnavigation outright.

The 41,165 nautical mile circumnavigation takes eleven months to complete and crew choose to race around the world or take part in one of more of the eight individual stages with the global route.

It is one of the toughest endurance challenges on the planet, but this is what makes it such an attractive proposition to thrill-seekers and adventurers alike. Simply, there is nothing else like it and that’s why over 5000 people have competed in the twelve editions of the biennial race so far.

Ha Long Bay, Viet Nam took the lead on Christmas Eve and predominantly held it throughout. On arrival, Skipper Josh Strickland said: “It’s been a long old race this one. If we remember, at the start we had a two day beat into 20-25 knots, then a lovely low pressure system zoomed us down to the bottom of Tassie, where we were met with wind hole after wind hole, then at the end we enjoyed the trades (bar the direction).

“It’s been a real test for me personally. I was finding decisions to be very high stake and fortunately most have paid off!”

The 16-strong winning team is crewed by non-professional sailors and includes Tewantin business owner John Broomfield, 52, from Noosa, Queensland who is racing the full circumnavigation.

What’s more impressive is that John had never previously been on a boat. He was inspired by his late brother-in-law, a keen yachtsman who had built his own yacht – but sadly never got to sail around the world after losing his battle with cancer.

Having never sailed before, John is delighted with his progress. He says: “I look back to August last year when I knew nothing about sailing and now, I am pretty confident on the boat now.”

When asked if he would encourage other Australians to take part in the Clipper Race, John is unequivocal in his response. He says: “Do it! You look at sailing videos on YouTube and you might think ‘you can’t do it’ but with the Clipper Race and the support that you get means that ‘you can do it’. You get all this amazing training and look at me – I had never been on a boat ever and now I have sailed halfway around the world. You get one shot and you don’t have to go all the way around the world. You can do one leg; you can do two legs – go for it!”