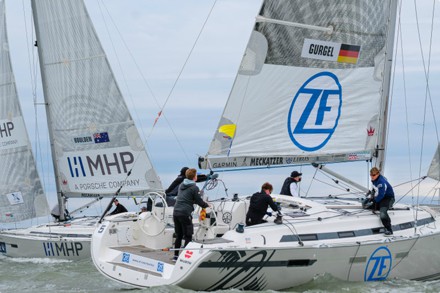 The number nine of the Match Race Rankings and his crew won five out of their six duels on Lake Constance in front of Langenargen, only suffering one defeat against the Polish HRM Racing Team of Lukasz Wosinski. The crew from Royal Freshwater Bay Yacht Club is leading the intermediate classification after 11 of 15 flights with five wins and one loss, followed by Germany’s Max Gurgel and his Team Vmax Yachting. They are in second place with five wins but also three defeats.

The Hanseats are the only German Team competing in the Grand Prix on the Swabian Sea and opened their quest for a podium position with a victory against top favorite Eric Monnin in fresh wind up to 14, 15 knots. Said Gurgel, who is a Physician and well known as “Boat Whisperer” in the big boat scene,“That’s been a promising start. We are certainly happy with our position after day one, even though we’ve made a couple of annoying mistakes today which we would rather like to avoid tomorrow.”

Gurgel had set his sights on a place in the semi-finals as his minimum goal ahead of his third participation.

The Swiss defending champions started the regatta a bit bumpy with their defeat against Gurgel’s quintet in ideal sailing conditions. Helmsman Monnin blamed “our bad timing” for the 2:2-balance after four matches, but was afterwards able to score twice again with his Capvis Swiss Match Race Team and sits in fourth after day one with a full sailing program of a total of nine hours on the water. Only one point seperates the “Swiss Clockwork” before the last two flights of the qualification round.

Said Monnin, “Our two defeats today haven’t been ideal. We have to sail better tomorrow, then we’ll have it in our hands. But sitting in fourth means that we are in a good hunting position.”

Germany’s most famous Grand prix of the best duel sailors had started on Thursday morning with the Round Robin qualification in which each team sails once against each other, including ten teams from seven countries. The teams from Australia and New Zealand had the longest journey, both, Will Boulden’s crew as well as New Zealand’s Nick Egnot-Johnson and his team Knots Racing, are in action for the first time in Match Race Germany.

The shortest journey to Langenargen had Austria’s Max Trippolt, a well-known sailmaker from Bregenz, who just had to cross Lake Constance from the other side. With four wins but also three defeats the likeable Austrians with their solid fan base will have to fight for a place in the quarter finals on Friday.

Slovenian skipper Dejan Presen would certainly have liked to score more wins than the two his Lumba Match Race Team was able to collect. Thus they will start into the final duels of the qualification round with their back to the wall. Dejan Presen explained: “Sailing on this beautiful lake is very demanding. You have to have a lot of feeling for the big boats. And it’s very hard to see and read the wind properly. We won our first three starts in the morning but lost one of these races.” Afterwards two more defeats caused a negative balance.

“For us as organizers, today was a tailor-made start for Match Race Germany with great sailing conditions on Lake Constance, a full sailing program and thrilling duels on a high level,” said Sports Director Eberhard Magg. “The performance of the competitors was like a huge promise for the coming days. We expect a full house in Langenargen’s Gondola Harbour over the coming days and for the Grand Final on Whit Monday. The spectators can look forward to a great sports spectacle under sails.”

The qualifying round will continue on Friday, The 22nd Match Race Germany ends after quarter-finals and semi finals on Whit Monday with the Petit Final, the Grand final and the award ceremony including a public press conference in Langenargen’s Gondola Harbour.