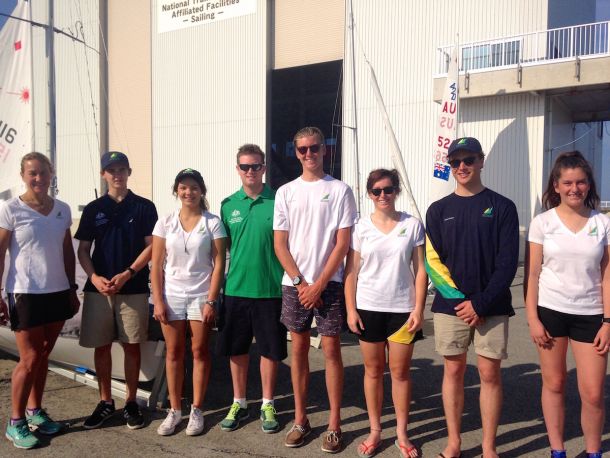 The Australian Youth team in Japan. Photo YA.

Australian Sailing’s group of Youth sailors, who were part of this year’s invitational Australia – Japan Youth Exchange program, have topped the ranks at the Japanese Youth Worlds selection regatta in Wakayama, Japan (20-22 September 2015).

Racing at Wakayama Sailing Club was in combined fleets with both girls and boys racing together and as part of the Japanese Youth National Team training camp.  This was followed by the Japanese selection races for the ISAF Youth Worlds to take place in Malaysia at the end of December. The Australian sailors participated in the Laser Radial and 420 events and were the thankful for the experience – both on and off the water:

“It’s been a really good experience and it’s been a lot of fun getting to meet new people. I’ve especially enjoyed the food and trying new things which is a little bit out of my depth, it’s been a bit trial and error but pretty good and I’ve learnt heaps,” Conor Nicholas said.

Conor Nicholas was second to his club mate and training partner Alistair Young on qualifying for this year’s Youth Worlds but learnt a lot from the Japan experience and will now focus on his goal to qualify for the Youth Worlds next year:

“This was my first regatta after the Radial Youth Worlds and it’s been a good regatta sharpening up again to prepare for Youth Nationals next as a first qualifying step towards next year’s Youth Worlds. This regatta has been good to test yourself and to be really accurate with what you do.”

Jacinta Ainsworth will be representing Australia in the Laser Radial at the Youth Worlds in December and, as with Conor Nicholas, it was her first time away without her parents, an experience she believes will help her at the Youth Worlds:

“Being on my first solo trip was actually a lot harder than I thought and it took me a couple of days to get into a routine. But I think it was a valuable experience and I have come away with some great skills from this. It will be fantastic to have this under my belt before Malaysia.”

As for the sailing she said: “The conditions have been really shifty here, ranging from 25-30 degree shifts so it’s been really good to practice all the skills and hopefully experience something similar to Malaysia.”

2015 420 Australian Youth Champions Alec Brodie and Xavier Winston-Smith (NSW) will be joining Jacinta Ainsworth on the 2015 ISAF Youth Worlds team in Malaysia and Japan was a good first step to gel as a team and working together with the Youth Team coaches.

“It’s been really good to work with the other members of the Australian Team and to interact with them. We’re all from different states and it’s good to get to know each other better including the coaches,” Alec Brodie said.

“It’s been a good experience to make sure that our processes are the same in a different environment. For instance, we had to set up a boat from scratch, which we will also have to do in Malaysia where the boats will be provided as well. This was our first international regatta together and I think we did that well and made sure that our routines are the same as usual.”

The NSW pair took away a lot of insights from their first international regatta which will work in their favour come the ISAF Youth Worlds in Malaysia as crew Xavier Winston-Smith describes:

“It’s been an interesting experience and we’ve definitely learnt a lot about the Japanese culture, a new venue and it’s been great to meet some new people. Malaysia will probably still be different, but the good thing we’ve learnt here is that we have adapted to the culture and to use our processes in a different environment and hopefully we can adapt the same way in Malaysia. Also, we’ll get the same boat we had here in Malaysia and it was good to test some of the settings.”

It was the second time in Japan for Sophie McIntosh and Emily Summerell after just completing the 420 Youth World Championships there in July and a great motivation to aim for Youth Team qualification next year.

“It’s been going well and we’ve learnt a lot. It’s been a great experience for both of us in preparation for the nationals and hopefully we can qualify for the Youth World Champs next year,” Sophie McIntosh said.

“It’s been a great experience, absorbing the culture and learning heaps along the way. And Belinda (Stowell) has been a great coach. Shifty winds made the racing challenging and also very close and she really helped us out with the wind conditions and we like her teaching techniques,” Sophie McIntosch added about to opportunity to work with Australian Sailing Youth Team coach and Olympic gold medallist Belinda Stowell (WA).

Taking place for the fourth time, the program once again offered both Japanese and Australian Sailing pathway sailors a great opportunity to not only improve their skills and techniques on the water, but also to find lasting friendships between the two countries. It is a valuable opportunity to get to know a different culture, which is a valuable experience for athlete development as Belinda Stowell explains:

“It has been a great regatta for the youth team members and the light air racing was great practice for Malaysia. But the sailing was only 50% of the gains made. Learning a new culture, being away from their normal family environment during the regatta meant being more independent, and they had the chance to work together and make new friends, who will be racing against them in December in Malaysia.”

And thanking the Japanese Sailing Federation for the invitation she added: “We have been well looked after again, and the sailors have been making some good friendships with the Japanese sailors. It’s been another great experience and I thank the Japanese for giving our young sailors a chance to race internationally again, and gain valuable experiences, which will be important for all of their future sailing and racing goals.”

The two Laser Radial and four 420 sailors were the guests of the Japan Sailing Federation at Wakayama Sailing Club. It was the fourth year of this exchange, which is highly valued by both countries.

The team is flying back to Australia on Wednesday, 23 September and the 2015 Australian Sailing Youth Team members will get together next for a camp ahead of the ISAF Sailing World Cup in Melbourne in December with the whole team competing in the event before heading to Malaysia for the 2015 ISAF Youth World Championships (27 December 2015 – 5 January 2016)