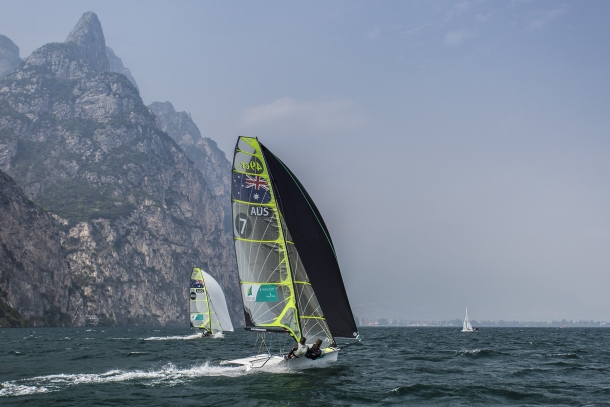 A group of thirteen Australian Sailing Team and Squad athletes will compete at the EUROSAF Garda Trentino Olympic Week in Italy (6-10 May), the second leg of five in the 2015 EUROSAF Champions Cup. Racing is scheduled to begin at mid-day local time today (Wednesday 6 May – 20:00 AEST). Medal races are scheduled for Sunday, 10 May.

Australian Sailing Team and Squad athletes are utilising the event as an opportunity for additional racing in the lead up to the ISAF Sailing World Cup in Weymouth at the beginning of June (10-14 June) as well as the EUROSAF Delta Lloyd Regatta in the Netherlands at the end of May (26-30 May).

The Laser will be the biggest fleet in Garda with 112 boats entered. Australian Sailing’s Laser athletes will be represented at Garda in full force.

The team has used the popular Italian location for recovery and cross training since Hyères. And today will be the first day back into racing since the Medal Race in France for World #1 and recent ISAF Sailing World Cup Hyères winner Tom Burton.  After his win in Hyères, Burton took time away from the boat for recovery and to refresh his focus for the tasks ahead during several months overseas as he explains:

“Since Hyères I have been taking some time off. My girlfriend has come over from Australia and we have done some touristy stuff and have showed her around Garda, which I love so much. So it’s been good to step away from the boat for a while.”

“I feel over the years I have come up with a good philosophy of what I need and what works well for me leading into a big event. I have a more focused approach now, when I really need to push and when I need to have time off. And the time off lets me push harder when I’m back.”

“So the first race day today will be my first day back at “work” since the Medal race in Hyeres and it will be an interesting week of racing. Racing in the Laser fleet is tough any day. If you’re not prepared physically and mentally, it’s going to be a tough battle with anyone from the front of the fleet down to the back of the fleet. So I am not expecting much except some tough days hiking. It will be all about getting back into sailing and fitness alike in the preparation leading into Weymouth.”

The Laser team will be up against five-time Olympic medallist Robert Scheidt (BRA) and there is also the ongoing internal battle with teammate and World #7 Matt Wearn (WA) as Burton is aware:

“Although I don’t like losing, it will be good to have benchmarks like Scheidt and Wearn in the breeze to see what I have to do in the three weeks post regatta and to make sure I will be on good form for Weymouth, which is the most important thing.”

In addition to the Australian Laser sailors, two Australian Sailing Team crews will be competing in the 49er fleet. David Gilmour (WA) and Rhys Mara (VIC) moved up into the World #1 spot on the ISAF rankings after finishing overall fourth at the ISAF Sailing World Cup in Hyères and will be looking at gaining more racing experience ahead of Weymouth. They will be joined in Garda by teammates Joel Turner (QLD) and Lewis Brake (QLD) who finished 30th in Hyères which also qualified them for Weymouth.

In the 49erFX Australian Sailing Squad’s Haylee Outteridge (NSW) and Sarah Cook (NSW) will kick-off their European season. The pair will be using Garda as a test before they will head to the Delta Lloyd Regatta, where they aim to qualify for the ISAF Sailing World Cup in Weymouth.

Australia’s 49erFX crews of Olivia Price (NSW) and Eliza Solly (VIC), plus Tess Lloyd (VIC) and Caitlin Elks (WA) already qualified at the Sailing World Cup in Hyères and are currently utilising the time for a training block back home in Australia.

Australian Sailing Squad’s Euan McNicol (NSW) and Lucinda Whitty (NSW) complete the Australian contingent at Garda and will be competing in the Nacra 17. They will be joined again by Australian Sailing Team’s Nacra 17 crews of Darren Bundock (NSW) and Nina Curtis (NSW) as well as Jason Waterhouse (NSW) and Lisa Darmanin (NSW) at Delta Lloyd regatta .

Racing starts on Wednesday 6 May, 12 noon local time (19:00 AEST) on five regatta courses positioned on Upper Lake Garda. The top ten medal races will be streamed live on Sunday, 10 May on the event website.

Garda Trentino Olympic week is the second leg of the EUROSAF Champions Sailing Cup series. The first took place in Palma, Majorca at the beginning of April. The European Olympic Tour is played out over 5 stages in Spain, Italy, The Netherlands, Germany and France.