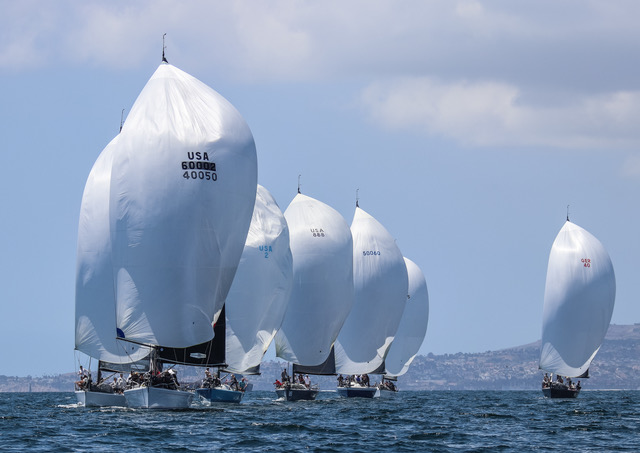 Skipper Alex Roepers and his team on Plenty put forth one of the most impressive performances in the history of the Farr 40 North American Championship, posting a tremendous score line en-route to a commanding victory.

Roeper steered Plenty to first place finishes in 10 of 11 races to finish with a remarkably low score of 11 points – 22 better than runner-up Struntje Light – to capture his second North American crown. Veteran professional Terry Hutchinson called tactics for Roepers, who has now won both his North American titles while racing off Long Beach. “We couldn't be more pleased with the results,” said Roepers, whose second place finish in Race 2 marked the only time Plenty did not get the gun. “It was definitely a very rare and unusual score line in this class. I don't think I've ever experienced anything quite like this.”

Plenty was without two of its normal crew as mainsail trimmer Skip Baxter and bowman Greg Gendell were not available for this regatta. Quantum professional Dave Armitage joined the afterguard and handled the main while Sean Couvreux worked the foredeck.

Plenty previously captured the 2014 North American Championship, which was also hosted by Long Beach Yacht Club. Needless to say, this particular portion of the Pacific Ocean has become a favorite venue for Roepers, a New York City resident. “I definitely do like sailing here and we are very happy to have another North American title to our credit,” Roepers said. “This regatta was just fantastic with all sorts of wind and weather patterns. I cannot say enough good things about Long Beach Yacht Club for providing great on-water race management and fantastic onshore hospitality.”

Owner-driver Wolfgang Schaefer and his team on Struntje Light won a dramatic match race with Australian Temptress in the last race to take second in the overall standings. The German entry placed fourth in Race 11 while the Australian boat finished sixth, a two-point swing that produced a flip-flop in the standings.

Struntje Light trailed Australian Temptress entering the final race and came out of it ahead by one. Sten Mohr made his debut as tactician aboard Struntje Light, which won Race 2 and took second in five other starts in posting a total score of 34 points.
“We had a very good battle with the Australian boat in the last race. We were behind most of the way, but passed them right before the last windwark mark and got some good luck on the run when another boat got between us,” Schaefer said.

Struntje Light was without usual tactician Tommaso Chieffi and that resulted in a tough outing on Day 1 with finishes of sixth and fourth in three races. Communication among the afterguard was much better the rest of the regatta as Schaefer steered Struntje Light to a steady string of seconds.

A sixth in Race 10 bounced the German boat back to third and led to the match race with Australian Temptress, which was skippered by Ray Roberts. Mohr is a three-time world champion in the Swan 45 class, but was racing aboard a Farr 40 for the first time. “This whole week was very difficult because we had a special situation with a new tactician. We had to learn a little bit,” Schaefer said.

“The good thing is that our crew always fights so hard. We had two difficult starts today, but didn't give up. We continued working and coming back,” Schaefer added. “I though the competitive level of the fleet, especially among the Corinthians, was dramatically improved and that made things very tough.”

Roberts, who was chartering Temptress from owner Ray Godwin, was nonetheless pleased to place third in the strong nine-boat fleet. David Chapman called tactics for Roberts, who finished second or third in eight of the 11 races in capturing the Corinthian championship. “We're very happy with how we did considering we decided to compete in this regatta on somewhat short notice. We've really enjoyed the racing and the competition,” Roberts said. “I'm happy with how it's all come together. We were able to charter a good boat and come up with a strong crew.”

Roberts, a Sydney resident who has skippered a Farr 40 in a few Australian events, said the experience was so positive he might consider coming back to the United States to race in the iconic class some more.

Farr 40 class manager Brady Stagg said a healthy fleet of 15-20 boats is expected to compete in the 2018 world championships, marking a significant renaissance for the class. “I'm okay with the result for this regatta, but my expectations are to be closer to Plenty,” Schaefer said. “I'm not concerned. We can reset because our crew is experienced.”