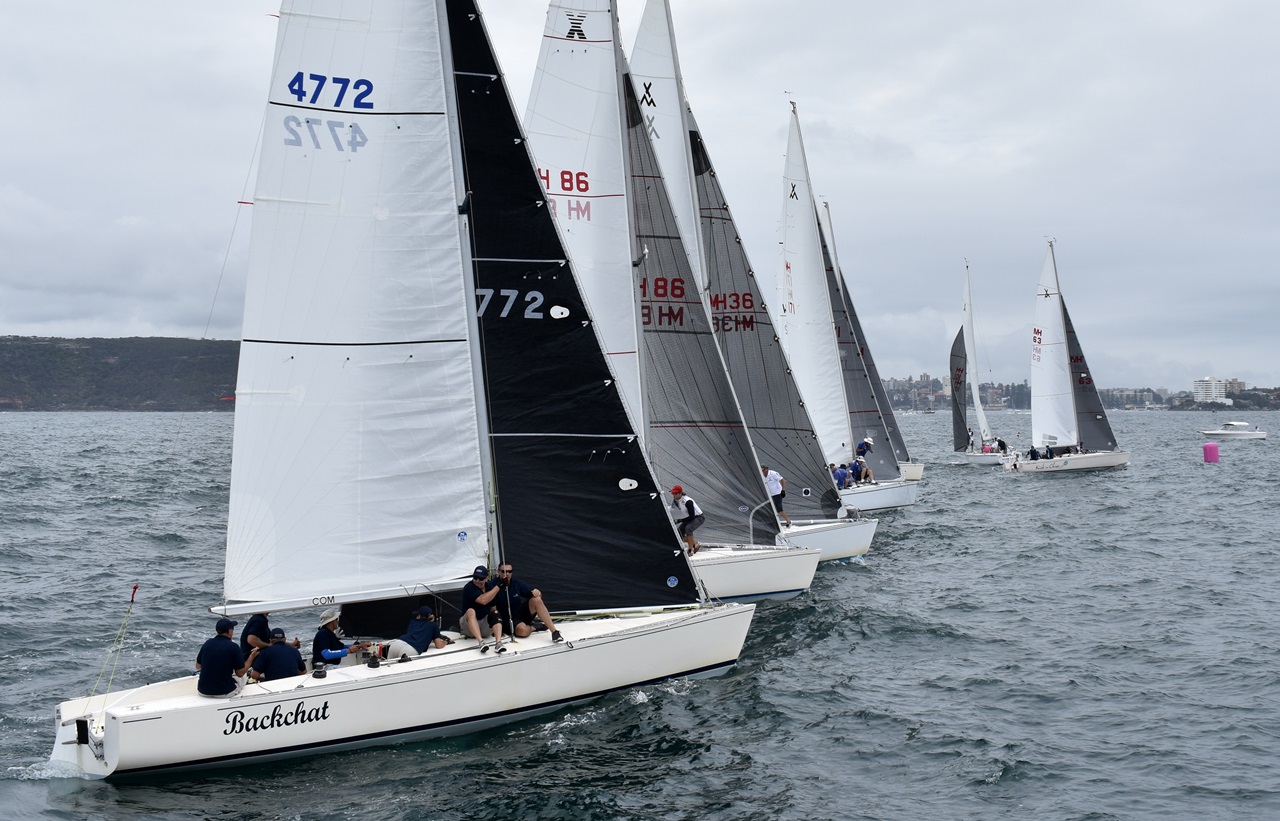 The 2018 Adams 10 Australian Championships are being sailed at Middle Harbour Yacht Club (MHYC) over this Australia Day weekend with seven races scheduled.

“The competition will be wide open this year,” said John Roxburgh this morning, just after stepping down as President of the National Class Association.

“Rob Clarke’s Kick ‘n Chase, Mitch Miller’s Rock Solid, New Class President Patrick Delaney’s Powderhulk and Jim Curtis’ Another Dilemma are all boats with a good chance of taking the title, but racing is very close right across the fleet,” he said.

It was overcast and humid for most of the day, with a light north easterly greeting sailors as they arrived on The Sound.

After a short postponement and a general recall, Race 1 was started under Black Flag in 7-9 knots with a course laid between North Head and South Head. As the breeze did not fill in as expected, Race Officer Phil Yeomans shortened course at the top mark. Ross Bell’s Let Loose took the gun 14 seconds ahead of Powderhulk (Patrick Delaney) with Another Dilemma (Jim Vaughan) third.

Race 2 was sailed in about 10 knots with a course laid between Middle Head and Quarantine Head. This time Patrick Delaney and the crew of Powderhulk turned the tables on Ross Bell’s Let Loose, finishing 11 seconds ahead. Tom Braidwood’s Backchat was third.

At the end of day one, Powderhulk and Let Loose are on equal points at the top of the table with a 6 point gap to Rock Solid and Kick ‘n Chase.

With a forecast of more appealing moderate to fresh breezes over the next two days, it is expected that three races will be sailed tomorrow and the final two on Sunday. Competitors’ worst results are discarded after 5 races.

The Adams 10 is an outstanding boat to race. Suitable for one design and IRC racing, it is also a perfect twilight or club racing boat. The design was conceived as a one design yacht suitable for harbour and ocean racing as well as family cruising.

Class rules are designed to preserve these characteristics and control the cost of ownership through strict one design rules. When competing as a one design class, all boats are essentially equal and racing is a test of sailing ability above anything else.

Middle Harbour Yacht Club has an active fleet of Adams 10s that participate in the club’s inshore and sprint series as well as pursuits and twilight races.

Full results and all information: www.mhyc.com.au/sailing/regattas-championships/adams-10-australian-championships-2018