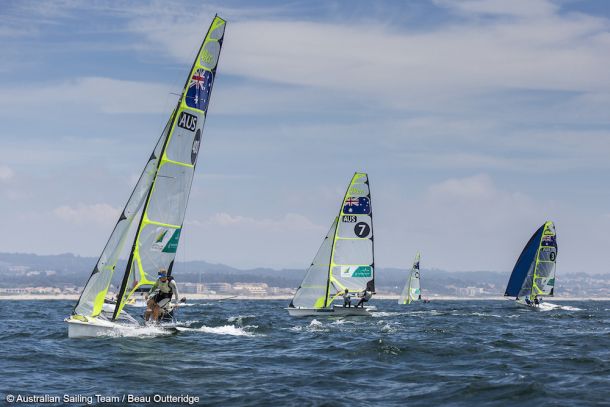 The Europeans is an Open event, permitting entries from non-European crews and Nathan Outteridge and Iain Jensen are expected to challenge for the Open title. They will look to build their performance in the lead up to the Rio Test event after winning the silver medal at the ISAF Sailing World Cup in Hyères at the end of April and finishing outside the podium at the ISAF Sailing World Cup in Weymouth and Portland, followed by a stint with their Artemis America’s Cup team in Bermuda.

Porto will see the continuation of the battle with New Zealand’s World Champions Peter Burling and Blair Tuke, who continued their winning streak by finishing first at the recent Sailing World Cups.

Australian Sailing Team’s skipper David Gilmour, who with crew Rhys Mara finished fourth at Hyeres and 16th at Weymouth and Portland, is looking forward to the event.

“After the World Championships the European Championship is the next most competitive event that happens each year in our class. All the top teams are here, so a good result will be similar to a good result at the World Championships,” Gilmour said. “We’ve had a couple of weeks off now and we’ll be coming into this regatta pretty fresh. We had done two months of full on sailing here in Europe up until Weymouth. It is a different approach to this regatta as our last ones, but so far it feels pretty good.”

The 49erFX European Championship runs concurrently, with only one Australian crew featuring in the women’s skiff line-up for this edition after injuries sidelined Eliza Solly (crew for Olivia Price) and Tess Lloyd (usually sailing with Caitlin Elks).

While both recover from knee (Solly) and ankle (Lloyd) injuries, remaining Australian Sailing Squad member Haylee Outteridge will sail this event together with Caitlin Elks.

This decision comes after she and her partner over the last few months Sarah Cook decided to cease campaigning together in the 49erFX. As a result, the rower-turned sailor and dual Olympian will be leaving the Australian Sailing program.

“In her short time in the sport Sarah has proven herself to be extremely dedicated and tireless in her efforts to become the best sailor she could be,” said Peter Conde, Yachting Australia Performance Director. “Sarah brought her Olympic experiences from rowing to the program and was always willing to share these to benefit others. On behalf of all of us from Australian Sailing I would like to wish Sarah all the best for her next endeavours and I looking forward to still seeing her around a boat park now that she has the sailing bug!”

Cook came into sailing from rowing after the London 2012 Olympic Games, in which she represented Australia in the Women’s eight, to sail with 2008 Olympic gold medallist Elise Rechichi. The pair had a successful first year together sailing in the Women’s 470, becoming Australian Champion and finishing in the World’s top ten, which qualified Cook for the Australian Sailing Team in 2013.

After Rechichi became mother to now seven months old Charlotte, Sarah Cook moved into the 49erFX with Haylee Outteridge at the end of last year.

Cook surprised the sporting world with her successful transition into the sport and does not regret the experiences and having ventured into what appeared a very ambitious project at the time as she explained:

“It was always an incredibly ambitious project, my transition from rowing to sailing. However it has been an experience that has not only been rewarding but also successful. There have been a handful of athletes in Australian sport who have competed for two sports, however more often than not, these sports have strong similarities, for example gymnastics to diving, or rowing to cycling. The switch Rowing to Sailing is a not like these other transitions however, as they are two completely different sports with little in common,” said Cook.

While the decision to stop sailing the 49erFX means an end to Cook’s Australian international sporting career, spanning over 12 years and representing Australia at five World Championships and two Olympic Games, the 30-year old plans to remain involved with sport:

“I am now coaching rowing full time at St Joseph's College in Sydney, and commentating rowing both Nationally and Internationally at events such as the Rowing World Cups and World Championships, The Australian Boat Race and the Henley Royal Regatta. My goal is to now commentate at an Olympic Games.”

The 49erFX European Championship kicks off on Monday 6 July, while the men start racing on Tuesday 7 July with the medal race taking place on Saturday 11 July and Sunday 12 July respectively. Results will be available at http://49er.org/event/2015-european-championship/