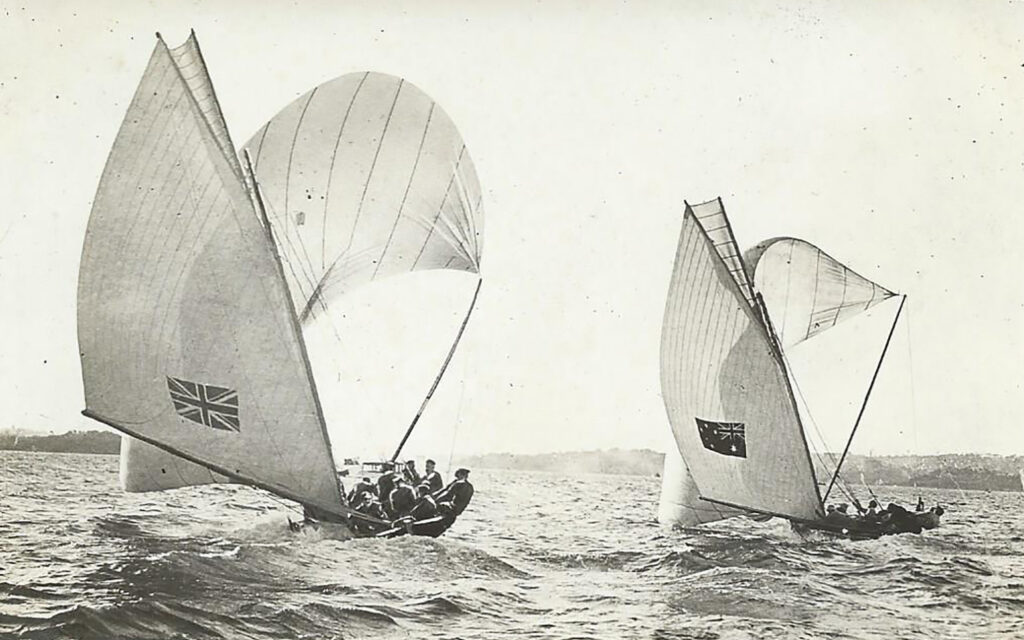 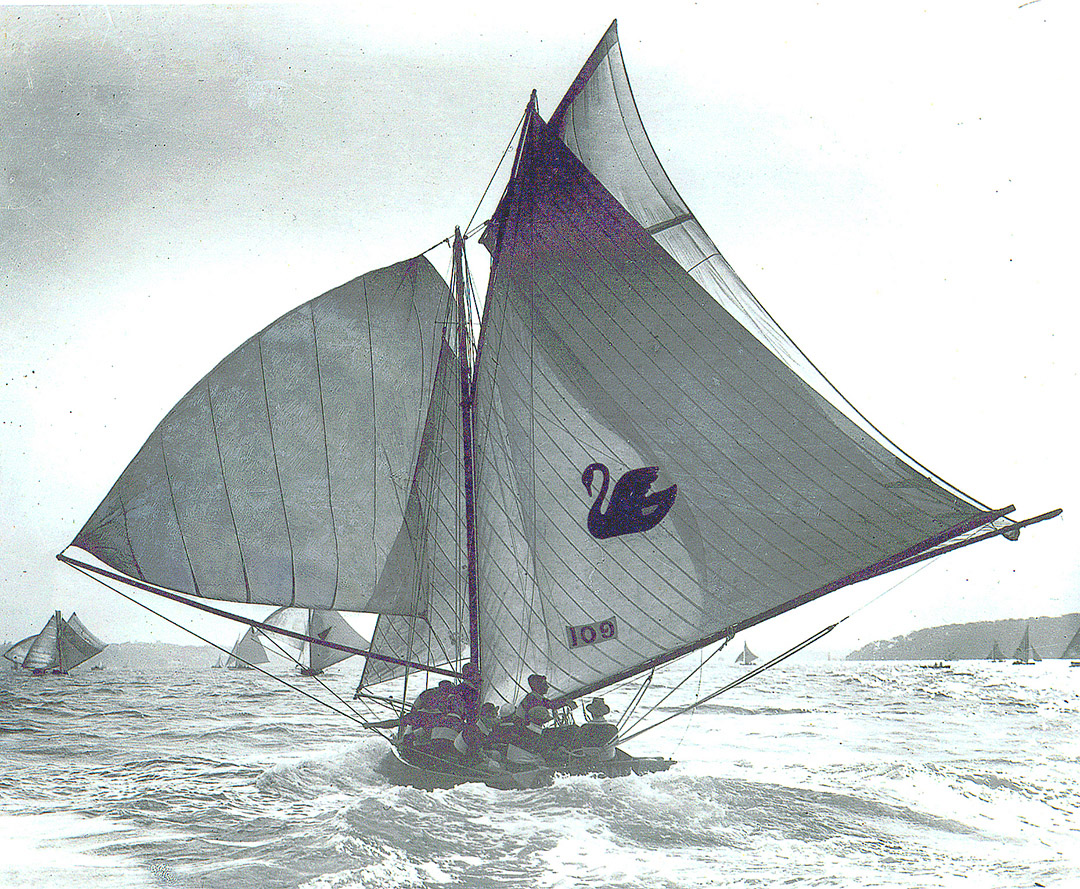 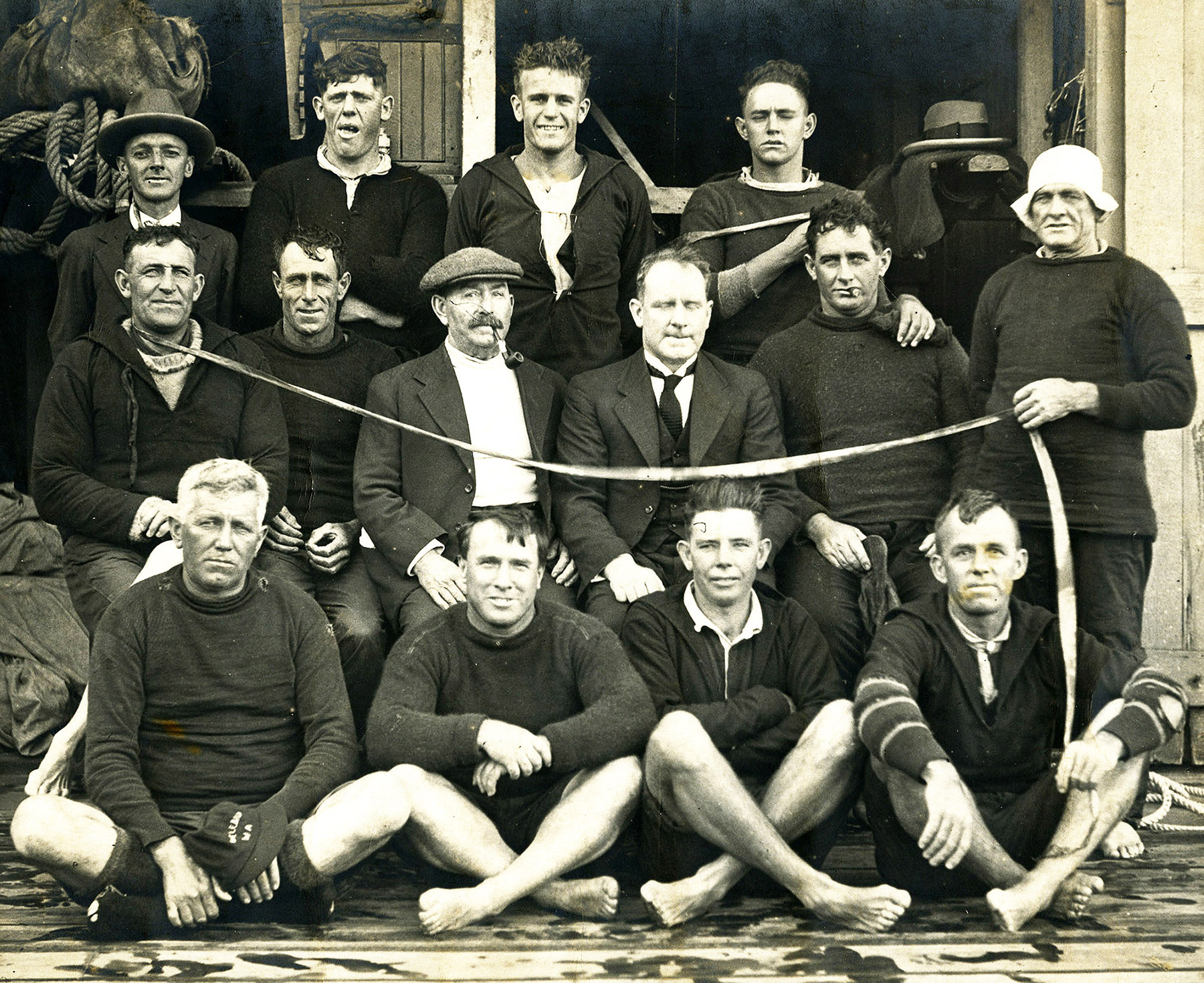 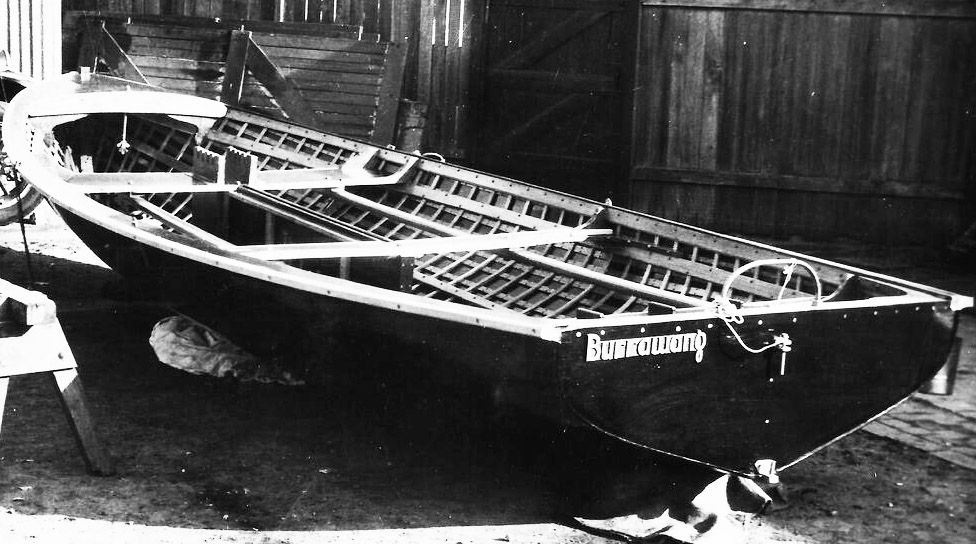 The previous Burrawang, before it began racing in the 1936-37 season. Pic - 18ft skiffs 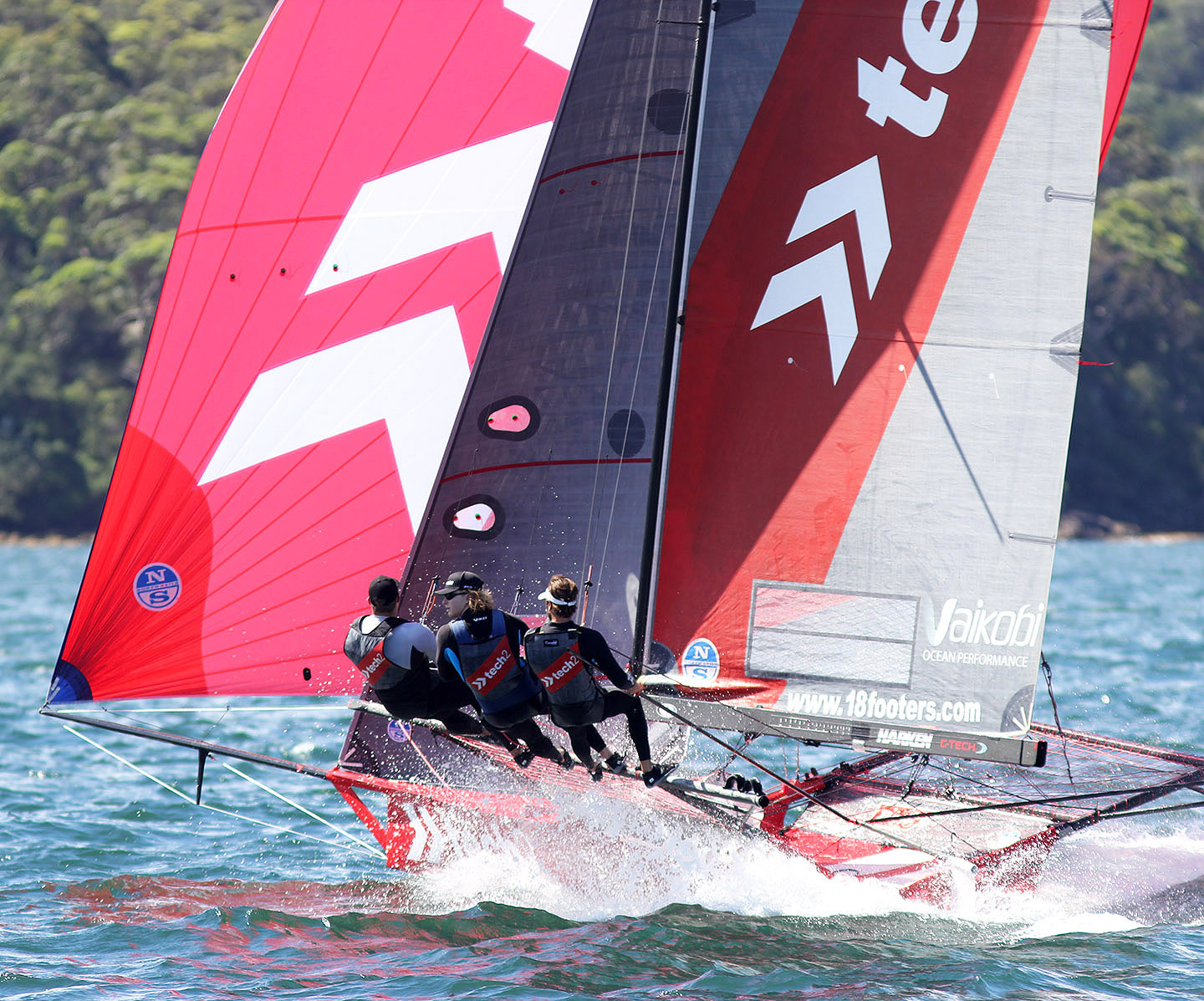 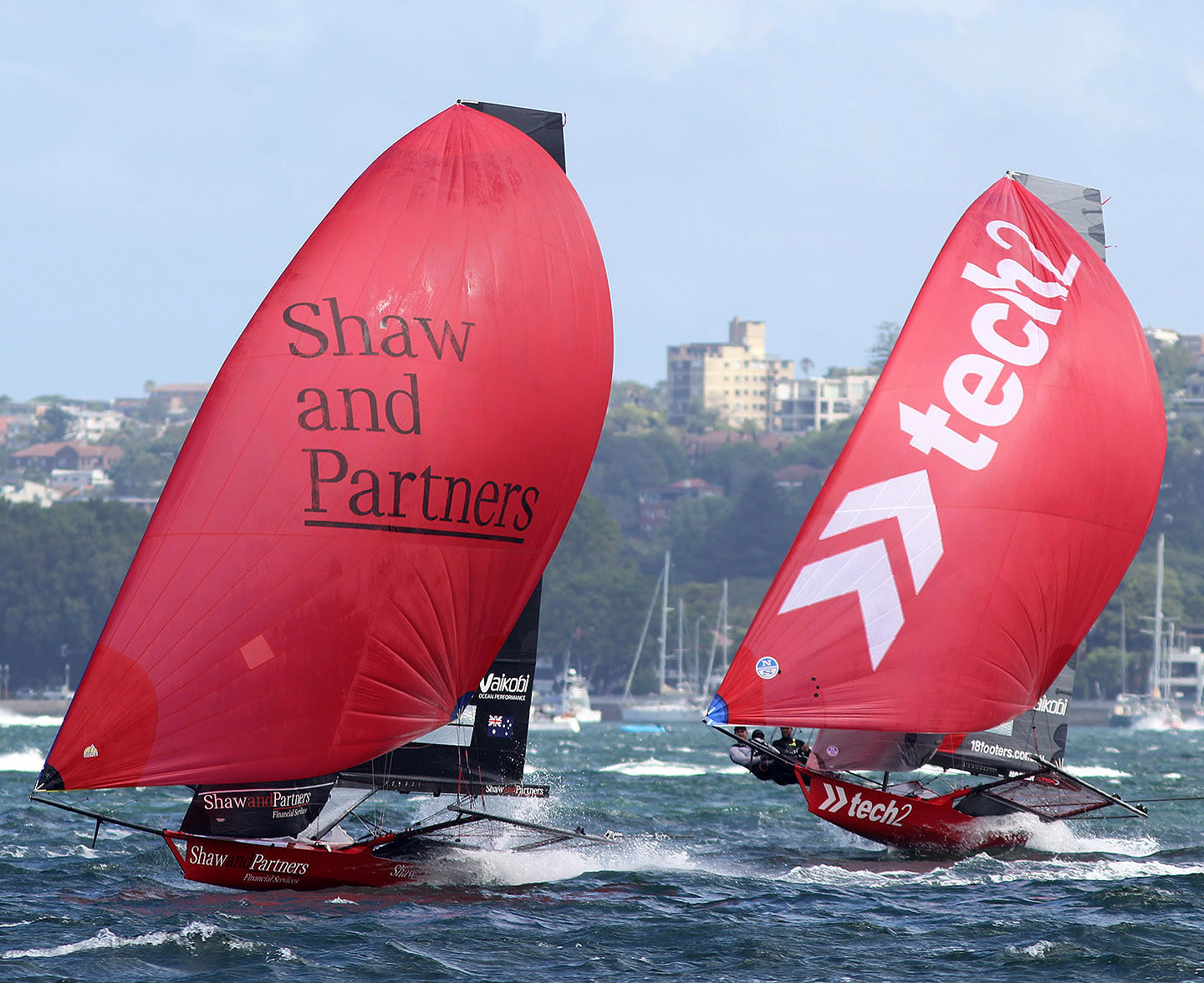 Shaw and Partners will be hoping to stay ahead of Tech2 during the nationals. Pic - 18ft skiffs 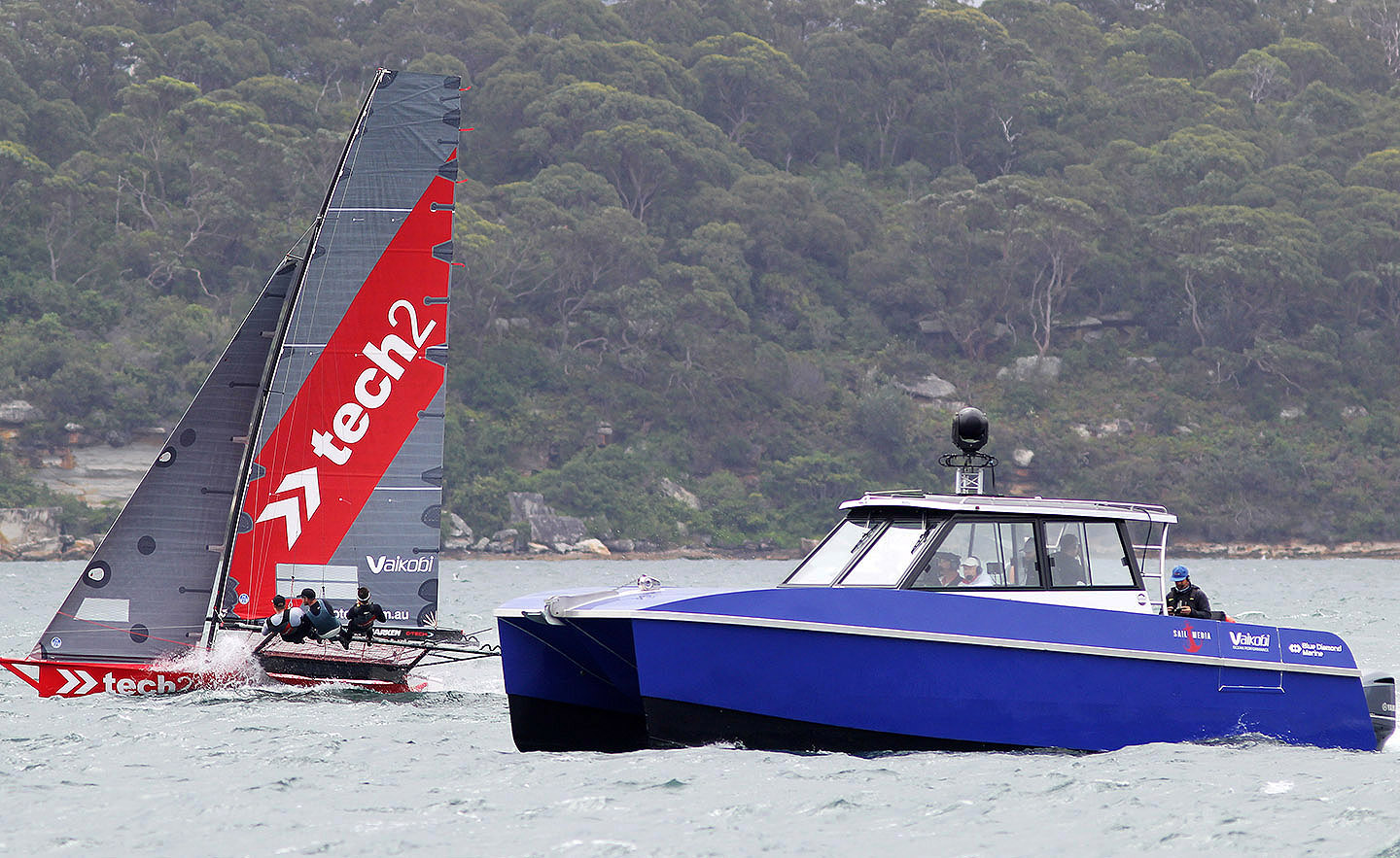 The live-as-it-happens video team keep a close eye on the fleet with expert commentary to go with it. Pic - 18ft skiffs 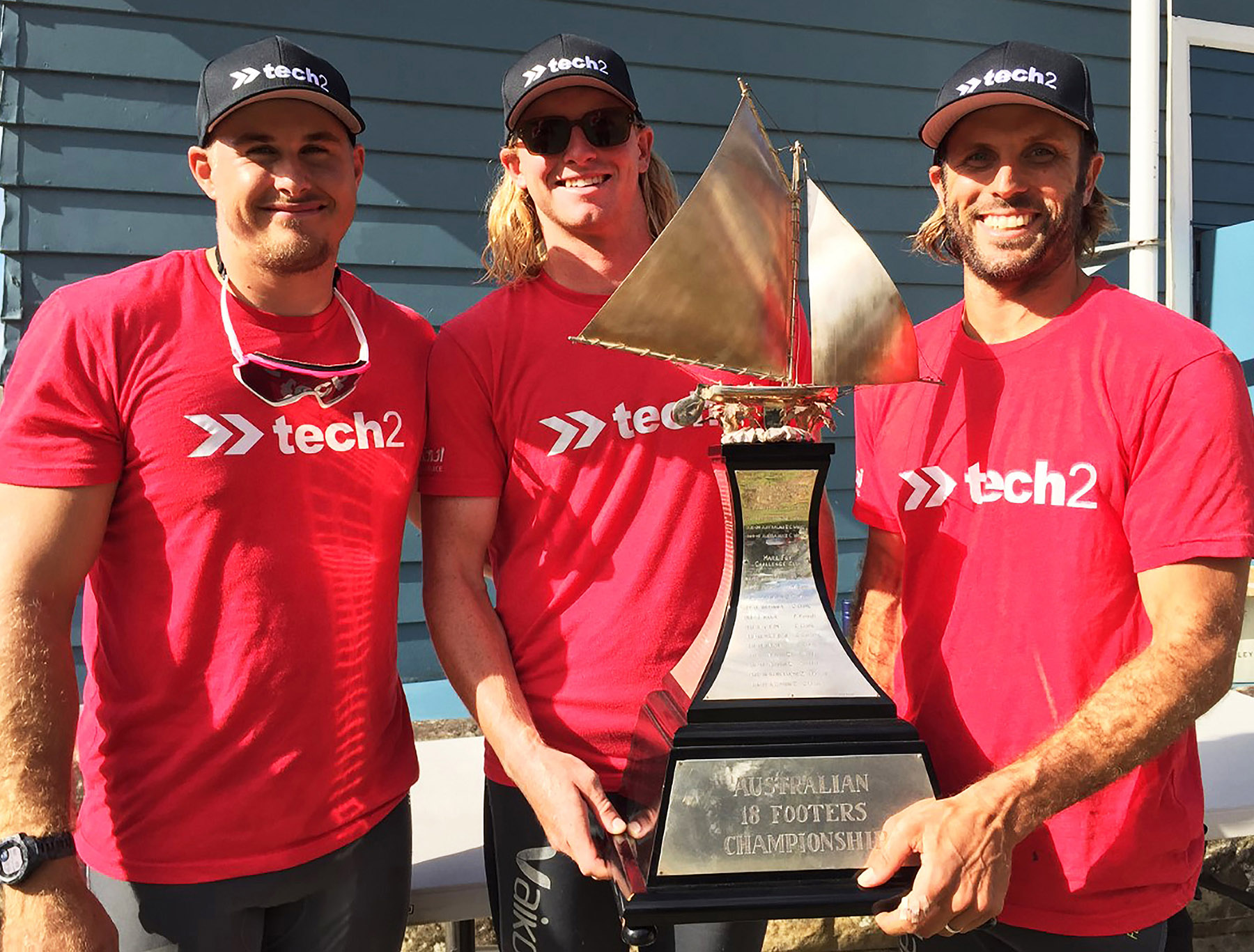 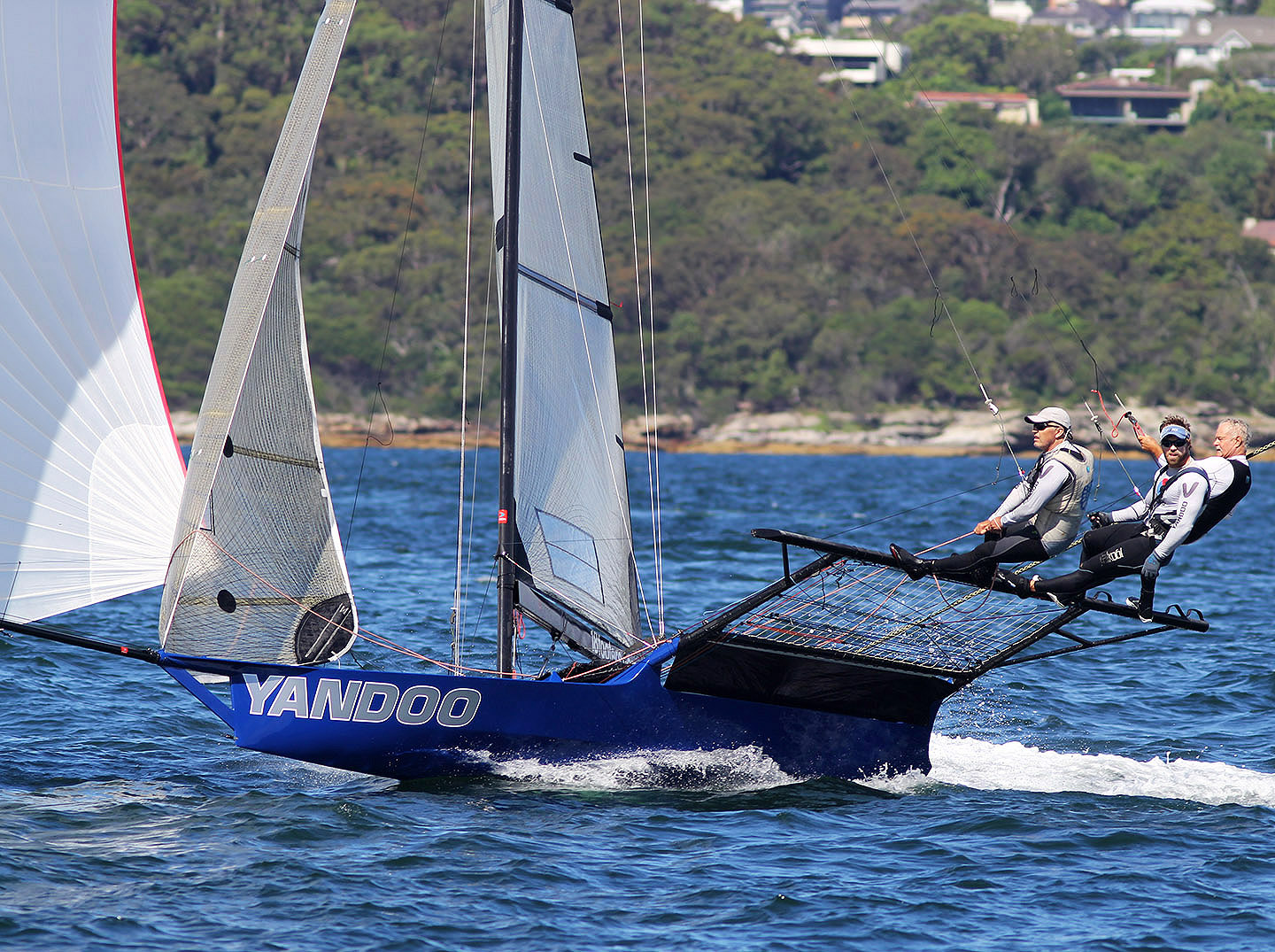 John Winning's Yandoo team is hoping to turn the tables on Tech2 after finishing second in the NSW titles. Pic - 18ft skiffs 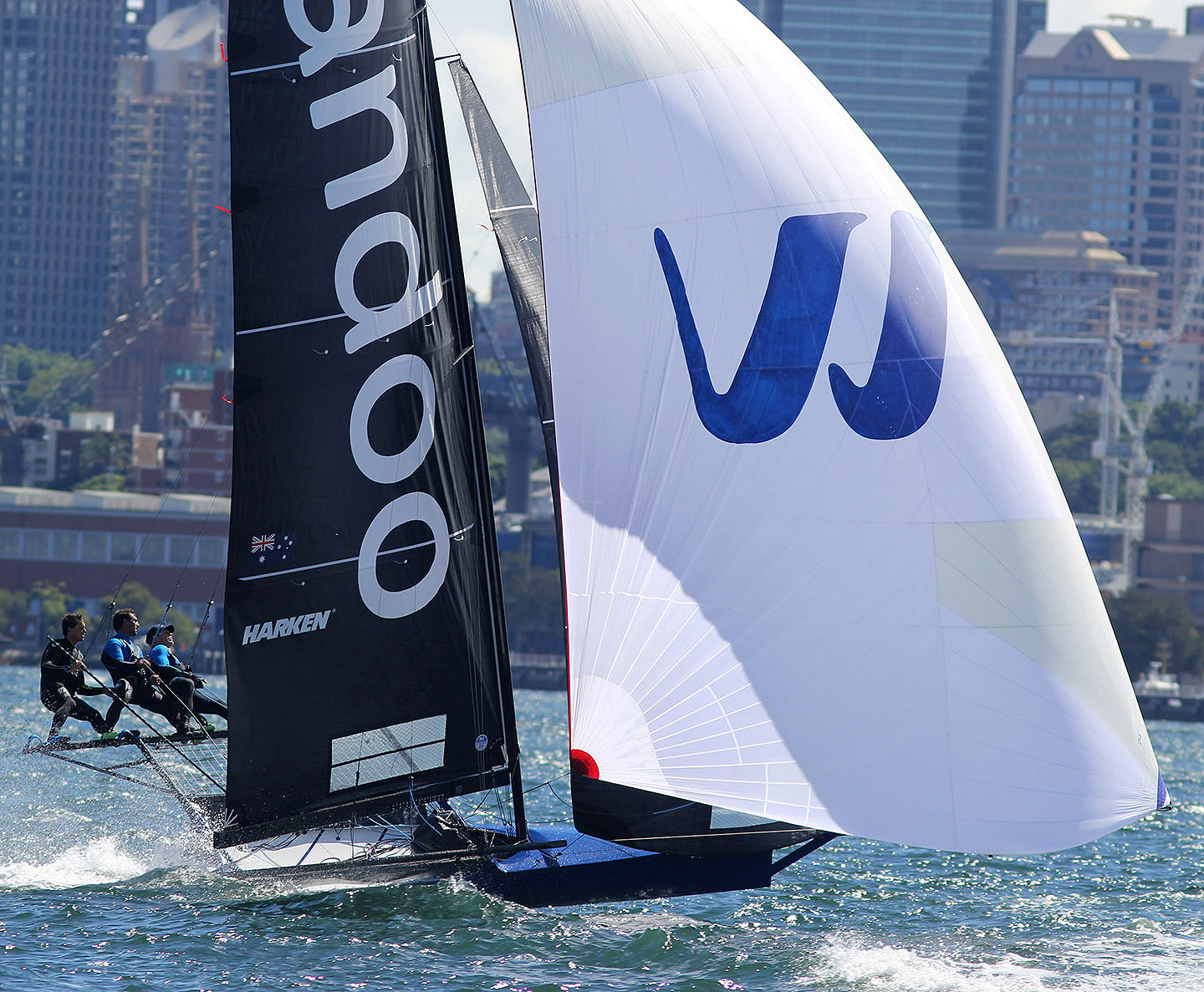 Andoo is one of the expected teams to feature at the Australian Championship. Pic - 18ft skiffs 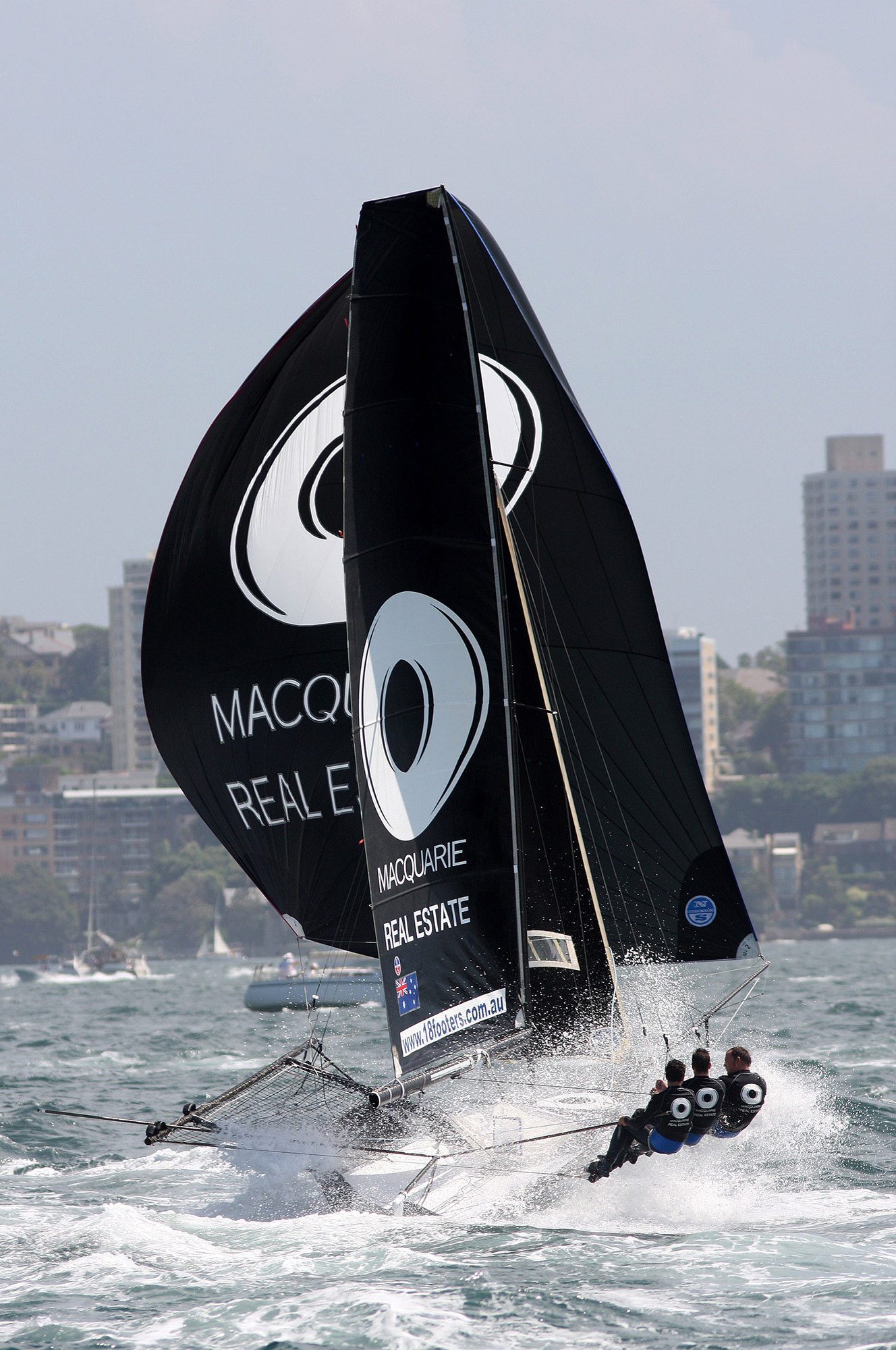 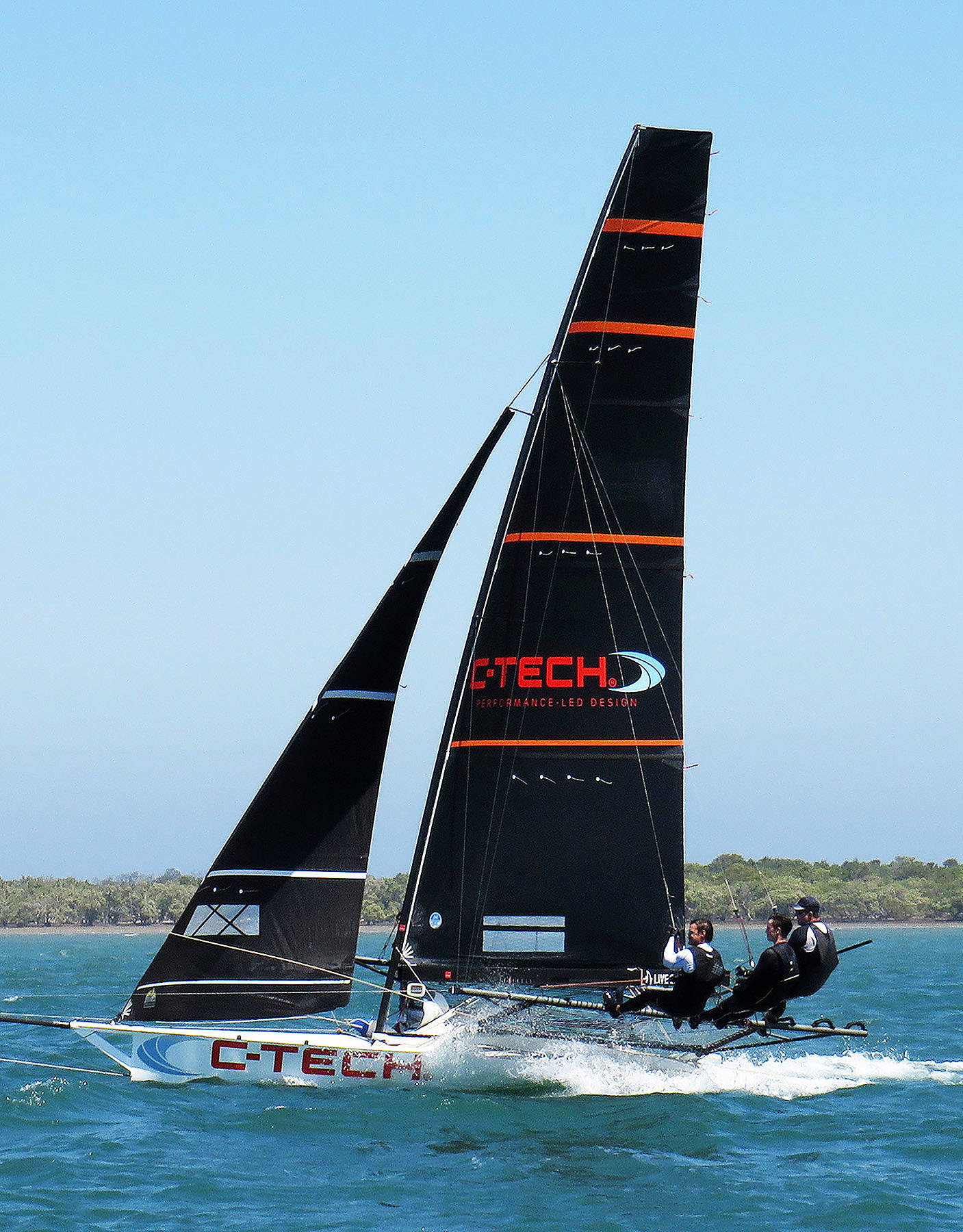 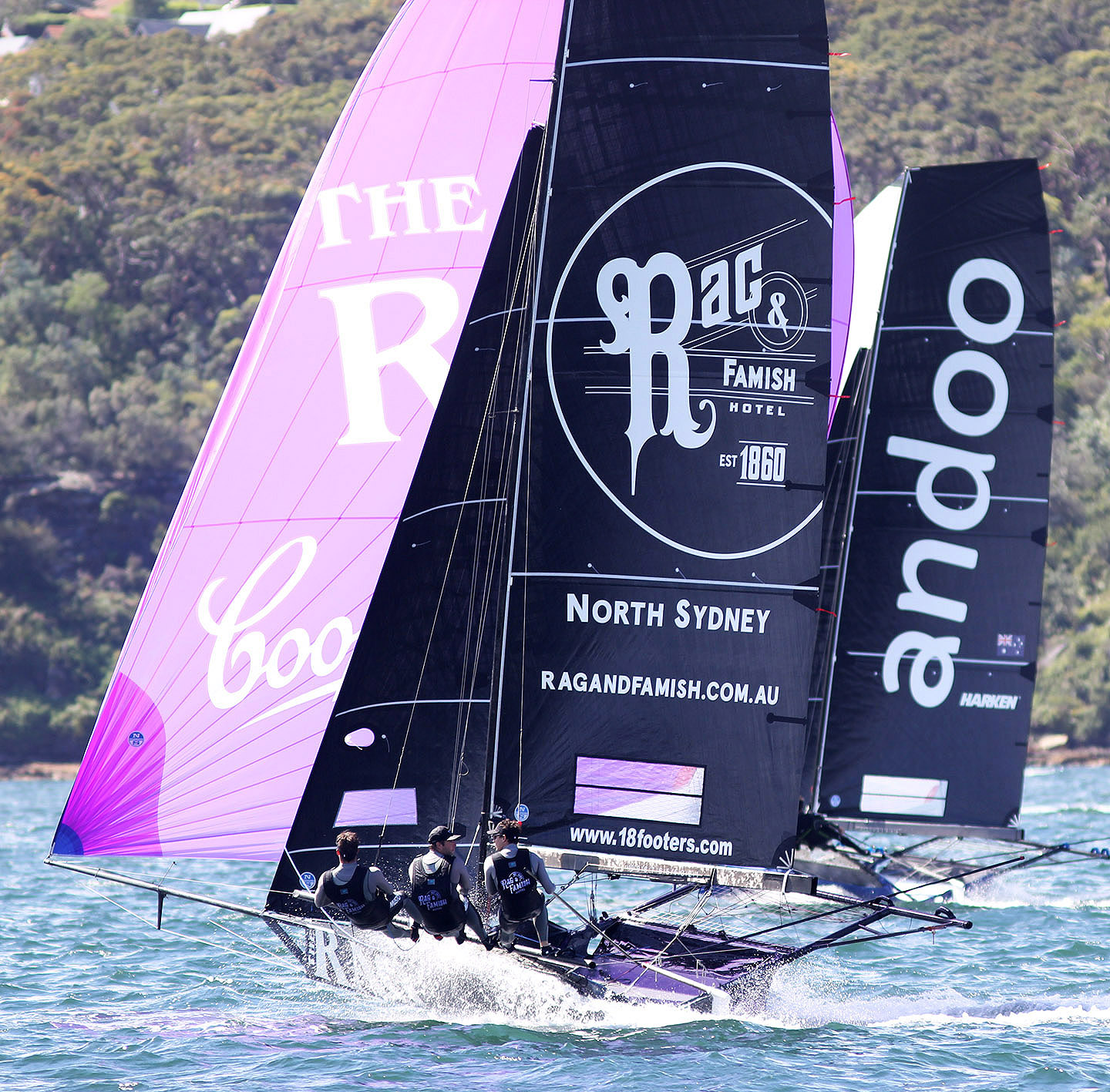 When the 23-boat fleet from NSW and Queensland lines up for Race 1 of the 100th Australian 18 footers Championship on Sydney Harbour this Saturday, the type of boat competing and number of crew members on each boat will be vastly different from the boats which contested the first event on the Swan River, Perth in January 1912.

When a class of racing boat is 130 years old, this is natural, but when you take a look at the photos from the past, and compare them to the 2022 boats, it’s almost impossible to believe that these are from the same class – the famous Australian 18 footers.

The modern 18ft skiff is a far cry from the cedar, 7ft beam ‘heeled dinghy type’ boats of the early 18 footer years, with their massive spread of numerous sails, and crews ranging from 10-15 men depending on the strength of the wind.

They are highly technical, very light, yet strong enough to meet the high demands of 18ft skiff racing, and require a very precise building process.

Chris Webb was the undisputed master of open boat sailing in the early 1900s, and had a long career which extended from the 1880’s until the late 1930’s.  He won more championship races than anyone and in the 1920’s was the skipper of HC Press, which was a long time scratch boat at both the Sydney Sailing Club and the Sydney Flying Squadron.

When the handicapper gave him a start of 15 seconds at one time, he refused to take the start and was asked to explain himself.  He replied that he would not take a start from anyone, “I am not a one-day champion, have always been a champion, and consider I should always be on scratch. While I am boat sailing, if I can’t win without a start it is time to turn the game up.”

The skipper presently making his mark as the modern day #1 skipper at the Australian 18 footer Championship is Jack Macartney, skipper of the 2021-22 championship favourite Tech2.

Jack first won an Australian Championship in 2006-07 when he was the sheet hand on Micah Lane’s Macquarie Real Estate team, which took the title on Sydney Harbour.

In 2021-22, he will be aiming to win his third consecutive Australian 18 footer Championship in the same Tech2 skiff, and has Lewis Brake on the sheet and Charlie Wyatt in the bow trying to emulate last year’s success.

Main challenger to the defending champion is the NSW Championship runner-up Yandoo team of John Winning, Fang Warren and Mike Kennedy, which led for almost the entire championship prior to going down last Sunday to an impressive Tech2 performance.

Sean Langman, Ed Powys and Josh Porebski finished third in the NSW title and will have a brand new Noakesailing skiff for the nationals.

Two new teams to the 18s in 2021-22 are Steve Thomas, Lindsay Stead and Locky Prior on Shaw and Partners Financial Services, which finished fourth in the states, and the Rag & Famish Hotel team of Harry Price, Josh McKnight and Harry Hall which won a race and finished sixth overall.

There are also two names back into the 18s this season, which will be contesting the championship.

One name returning this season is Burrawang, which first appeared in the 18 footers 85 years ago when a new boat was built for racing at the League during the 1936-37 season.

The 2021-22 season boat is Burrawang-Young Henrys, which is a combination of sponsorship from Burrawang Village Hotel and Young Henrys Brewery, who are both sponsoring for the first time in the 18s.

League Commodore, Simon Nearn is the skipper and has Rory Cox and Brandon Buyink in his team, which finished seventh in the NSW 18 footer Championship on Sydney Harbour last Sunday.

Another name making a comeback to the 18s this season is Fisher & Paykel, which was prominent on Sydney Harbour as a boat sponsor in the Australian 18 Footers League’s fleet for ten seasons.

Fisher & Paykel first appeared on the sails of Andrew Cuddihy’s skiff in the 2005-06 season and remained in the fleet, through a number of different skiffs and teams, until the end of the 2014-15 season.

The 2021-22 season Fisher & Paykel is skippered by Jordan Girdis, who has Nathan Edwards and Kurt Fatouros. Fisher & Paykel was also prominent throughout the NSW Championship and finished fifth in the 21-boat fleet which contested the championship.

Two Queensland teams will line up to take on the might of the strong NSW contingent.

The Australian 18 Footers League has decided to honour some of the past Australian Championship greats by naming each of the seven races of the 2021-22 regatta, as follows:

Spectators can follow the racing (on Sundays February 6 and 13) on board the club’s spectator ferry, however due to the COVID-19 policy, numbers are limited.  Booking online through the Club’s website is essential: http://www.18footers.com.au/18-footers-sailing/spectator-ferry/

For those unable to make it out onto the water, the club’s live-as-it-happens broadcast team will be on Sydney Harbour to capture all the action.  Live streaming is available at www.18footers.com by clicking on the ’18 Footers TV’ link.