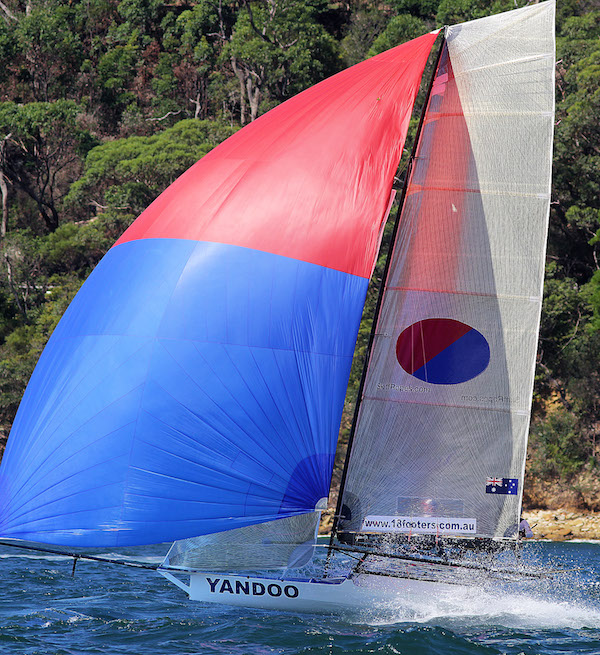 The Australian 18ft Skiff Championship is wide open after another day produced two different winners in Races 3 and 4 on Sydney Harbour on Sunday.

Smeg's team of Lee Knapton, Mike McKensey and Ricky Bridge dominated Race 3 in the 10-knot east-south-east breeze when they led at every mark before going on to a brilliant 1m29s win.

Smeg was in the lead shortly after the start and quickly opened up a big lead over the fleet.

A lead of 40s over Rag & Famish Hotel (Bryce Edwards) when spinnakers were set for the run back to the bottom mark almost guaranteed Smeg would not be beaten over the windward return course.

Smeg's lead was out to 1min at the bottom mark and interest centred on the battle going on behind the winner.

Race 4 followed soon after, and it looked as though we would have another Smeg victory when the champion team led the fleet over the first lap of the course.

Typical 'fluky' easterly conditions, however, began to play a part on the final windward leg of the course and Smeg's lead soon disappeared.

With just a few seconds between the two teams the race to the finish in Race 4 by finishing 4s further back in third place, held the spectators interest as the breeze freshened.

Yandoo's crew were superb and went to a 40s victory over Appliancesonline, while Finport Trade Finance completed a consistently good day.

The Championship has produced three different winners in the four races and the overall points reflect the closeness of the racing.

Yandoo's win has given the team a total of 13 points from the four races and a one point lead over Smeg (the only two times winner), which has a total of 14 points.

Races 5 & 6 of the Australian Championship will be sailed next Sunday, 11 February
The Australian 18 Footers League's Spectator Ferry will follow the races.