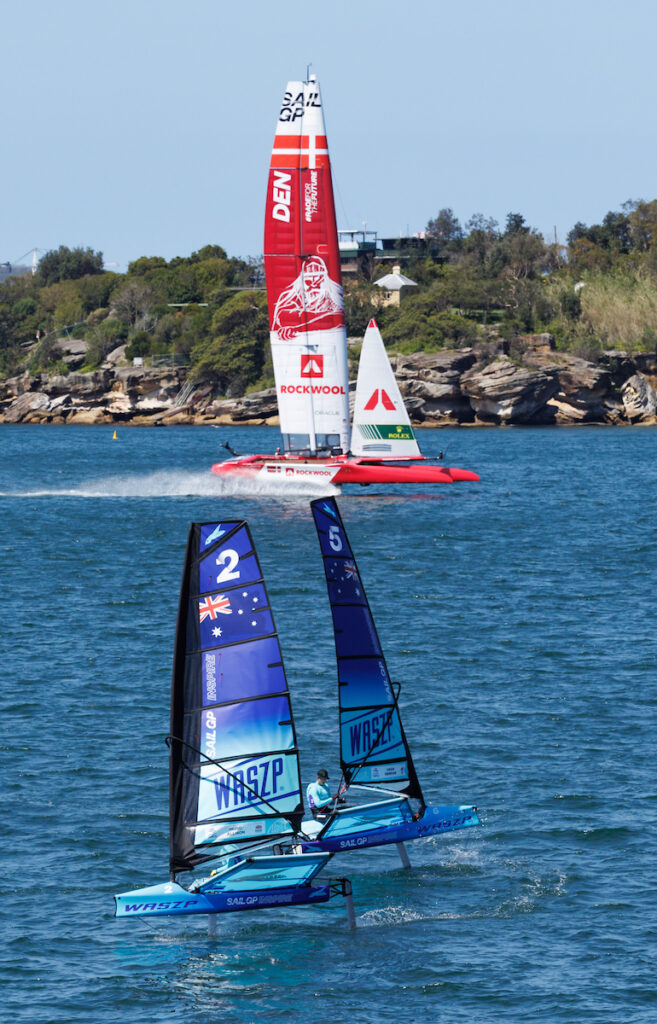 The 16 super talented athletes arrived on Tuesday to begin the week of Inspire Racing on the WASZPs. The program comprised of eight male and eight female athletes from a variety of sailing backgrounds. Most had come through the standard youth pathway programs. However, we are seeing some real talent coming out of other classes and in particular straight out of the WASZP as their primary class.

Tuesday it was all about training and familiarizing themselves with the boats. Almost 40 per cent of the athletes had not sailed a WASZP before and soaked up the knowledge of other sailors and the SailGP coaches. With the program mirroring the F50s, the less experienced athletes command more time in the boats to get up to speed and level the playing field.

Wednesday was a stunning Sydney Harbour day with a 15-18 knot nor-east sea breeze. This allowed for a full day of training and enabled those new to the game a chance to really hone their skills. What is super impressive is some of the sailors new to the WASZP were able to nail a couple of foiling gybes on only their second day in the boat. The day concluded with a tech base tour and meeting the teams. It was fantastic to see the F50 sailors giving so much back to the sailors. Nathan Outteridge spent a good 20 minutes with the kids and the openness of these types of sessions are gold for the next generation going forward.

Thursday and it was straight into qualifying, with a great breeze forecast all day from the south and hot racing on the course offsetting the drop in temperature, the scene was set. While pre-event favourites Jack Ferguson and Will Cooley got into their groove, perhaps the more impressive part of the day was the emergence of several challengers, Hugo Allison who is a full-time WASZP sailor and came through the International Cadet program synonymous with the southern states of Australia started to hit his stride, Keizo Tomishima who has also spent considerable time in the WASZP, as well as 29ers, showed amazing improvement over the three days to challenge the leaders. Even more impressive from the boys were the performances of 13yr olds Aidan Simmons and Joel Beashel straight out of Optis. Aidan managed to do just enough to qualify for the finals. The girls were also starting to get faster, with some great performances early in races only to come unstuck down the racetrack as the pressure intensified.

Friday came and word was that Shark Island was sold out for both days and a huge crowd would be in attendance on the water. You could feel the atmosphere around base camp at Woollahra Sailing Club starting to lift as we got closer to race time. The silver fleet was first on the course and again it is so cool to see what these sailors can do on three days in the boats, transferring their talents into a foiling boat is not easy. Joel Beashel was strong on the first day really starting to nail his boat handling.

It was time for the gold fleet to rev up the crowd on Shark Island, with Jody Sheils and Marc Ablett on commentary the crowd was at fever pitch by the time the sailors hit the course. The racing was fast and furious and perhaps the pressure was getting to some of the sailors. Jack Ferguson struggled to get off the start line in the first couple of races, letting Keizo Tomishima and Hugo Allison get the jump, while Daniel Links was not far behind. There were plenty of spills as the fleet hit the first mark with Bridget Conrad, Anna Cripsey and Brooke Wilson all battling it out and pushing the limits.

Athlete of the day went to Keizo Tomishima who took a three point lead into day two. Saturday then dawned and the promise of a classic Sydney Harbour Nor-easter was on offer. You could not script it better, with four races to conclude the championship Ferguson started to hit the turbo button. With an out-going tide against the wind, there were plenty of ‘pot-holes’ to negotiate down the course.

The atmosphere was electric on the island as the crowd was completely captivated by eight WASZPs charging in 20-25 knots of breeze. The groans came as boats went down the mine in a nose-dive and cheered as the athletes negotiated their way through the manoeuvres, what an unbelievable day!

In the end, it came down to the last race with only 1pt separating Ferguson and Tomishima, however, Ferguson who is a 2-time Australian WASZP Champion showed his premium boat-handling skills to complete a near dry-lap to win the title. This concluded an amazing event and the Inspire Racing program was on full display, there is a big announcement coming soon about Inspire Racing so stay tuned!