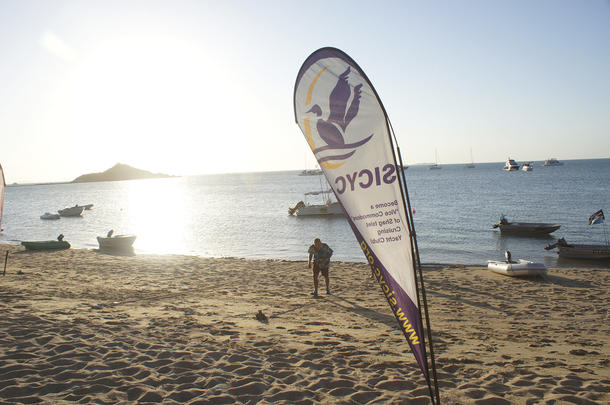 Back in 2015 Cruising Helmsman attended the weekend-long Shagger's Rendezvous as part of its continued support for the ‘exclusively, non-exclusive’ yacht club originally formed in 2009.

While attendance numbers were down that year, countering its normal trend of rising each year, the money raised was epic. In fact all the statistics from this club and its signature event are staggering. In 2015, the sixth running of the Rendezvous, there were a few extra announcements as well.

Approximately 180 boats anchored in the Whitsunday waters of Gloucester Passage around the eponymous Shag Islet. Many others booked units at the hosting resort of Montes Reef and next door’s Cape Gloucester Resort.

Over 800 people stayed for the weekend of fun and catch-up, enjoying the chance to mingle with so many like-minded cruising sailors. SICYC members, collectively known as ‘Shaggers’, started the weekend on Thursday with a meet and greet, culminating in the popular crab races to kick off the festivities.

On the Friday, the annual sausage sizzle on Shag Islet started at midday. The tiny island was covered in a sea of blue Polo shirts, given to every Vice-Commodore who joins the club. The evening was
a mild, relaxed affair around the bar at Monte’s.

That night though, Gloucester Passage is aglow for the judging for the best light show on board. It is a spectacular sight as the sun sets to see so many twinkling mastheads transform the darkening night.

Hands across the blue

The big day is the Saturday. It starts (for some) with Tai Chi on the beach. Then everyone boards their dinghies to head out just a few metres south of Shag Islet and raft up in the logo shape of the Prostate Cancer Foundation of Australia,
a folded blue ribbon.

The raft-up concept is to ‘hold hands across the blue’; so the turquoise waters of the Whitsundays is a perfect backdrop for such a demonstration.

Major sponsor for the Rendezvous is Abell Point Marina at Airlie Beach. This year, despite the deep tides, owner Paul Darrouzet brought his beautiful Falcon 90 powerboat Norseman to moor alongside the raft-up. While the punters in the dinghies rocked to the Pop Standen blues band on the aft transom, Paul and other sponsors presented cheques to the SICYC and PCFA VIPs.

On board to represent the PCFA was Professor Judith Clements AC. Professor Clements is in charge of prostate cancer research at the Institute of Health and Biomedical Innovation Queensland University. Clements is also Scientific Director of the Qld. Prostate Cancer Research Centre and became a Companion of the Order of Australia in 2015. Judith is chair of the Prostate Cancer Foundation of Australia Qld. Board.

To highlight the importance the Whitsunday area places on the Rendezvous, there were many other political VIPs in attendance. It has taken just six years for the cruising fraternity to command such attention.

SICYC co-founder Ken Thackeray, would like to throw down the challenge to other water-based sporting organisations: marinas, surf clubs, fishing clubs etc. to join with the SICYC Rendezvous on the last Saturday of every August and ‘hold hands across the blue’.

Every year the founders of SICYC, Ken and Rhonda Thackeray, come up with a theme for the day, this year it was the ‘Swingin’ Sixties’.

With its membership demographics lying predominantly in the 45 to 75 year age group, this was an excellent chance for people to bring out their old tie-die clothing and buy an afro wig. Shaggers delight in taking time to source, make, beg, borrow or steal costumes to suit the theme.

Needless to say it was a night of outrageous colour.

The Pop Standen blues band was boosted for the evening sessions with the inclusion of famous Australian guitarist Phil Emmanuel. It did not take long for the dance floor to fill up and remain so for every session.

Awards were handed out before the night got too late. Best dressed costume for both men and women plus best dressed boat at night and at day were judged and awarded. A raffle and auction of various obscure memorabilia were also conducted.

By the end of the night, just before the fireworks, Thackeray announced a preliminary fund raising count of over $77,000. This meant, still with the Sunday Pirate Party yet to be held, the 2015 Rendezvous had already surpassed last year’s effort. Last year’s effort was nearly double the money raised in 2013!

Given the previous three days, the Sunday Pirate Party is a chance to kick back and chat.

This year it was held at the Cape Gloucester Resort, next door to Monte’s. Most people arrived by dinghy, costumed up, channeling Pirates of the Caribbean.

But the frivolity did not cease. Best dressed awards again, ‘walk the plank’ auctions and a special effort from Vice-Commodore Seagull Reef Tiana.

All weekend Tiana had been conducting hair cutting on the beach and providing all funds to the charity drive. For some of the male vice-commodores this was the only time they got their hair cut all year. But this year Tiana went one step further and had her head shaved for sponsorship.

At the end of the day the final fund raising preliminary count was announced: $82,000 was raised at the Rendezvous over the four days.

This was the sixth Rendezvous held and the total amount raised for prostate cancer awareness and research now sits at $252,000.

The SICYC could not have made such an impact without the assistance of its major sponsors: Abell Point Marina and Oceanic Marine Risks.

One announcement made during the weekend promises a good insurance deal for everyone.

The ‘Shag Islet Cruising Yacht Club Pleasurecraft Insurance’ was launched at ‘hands across the blue’ raft up on the Saturday.

In conjunction with Oceanic Marine Risks, Pleasurecraft Insurance will offer competitive policy rates and donate five per cent of the premiums to the PCFA on behalf of the SICYC.

Features for the new insurance offer include:

This collaboration with an insurance underwriter represents a big step for the SICYC.

It shows that the not-for-profit organisation is willing to leverage its huge numbers for the benefit of members and its chosen charity.

In just six years the SICYC has members in 14 countries and closing in on 4000 vice-commodores overall, it averages two new members a day. As it continues to grow it will be interesting to see where this may lead; in a democracy, numbers are power.