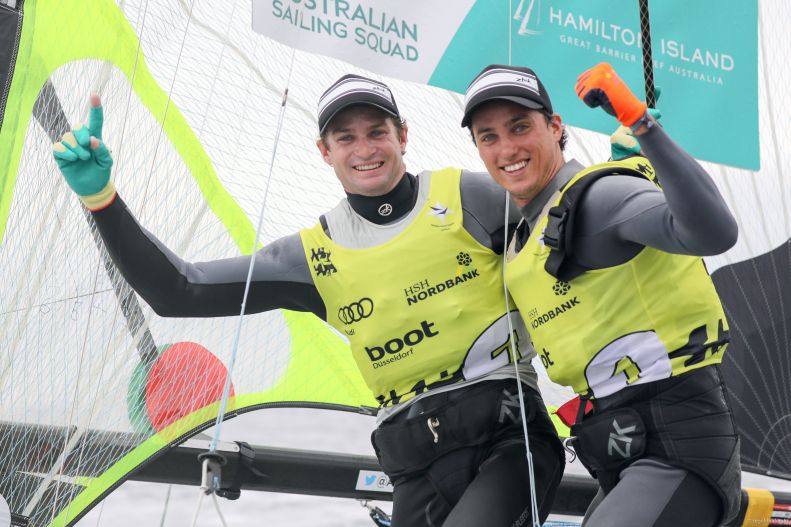 On a windy final day at Kiel Week, Francesco Marrai charged past his rivals to clinch Laser gold by the smallest of margins on the final day of Kiel Week. Marrai’s fourth place in the Medal Race was sufficient to put him on equal points with Karl Martin Rammo, but it was the Italian’s better placing in the Medal Race that clinched victory ahead of the Estonian who had to settle for silver.

Marrai was beside himself with excitement. “To come into the race not wearing a bib [for one of the top three places] and to win here in Kiel Week is a dream come true. I remember watching Philipp Buhl win so easily here before, he is the master of Kiel, and I said to myself, one day I want to win like him, and here I am!” Buhl was hoping for another medal this week, and gold was well within his grasp. But after finishing last in the Medal Race the German fell to sixth overall, so close were the points in this 132-boat fleet.

In the Laser Radial, Silvia Zennaro of Italy dominated the week to win gold for Italy. The bigger battle was for silver and bronze between two Turkish team mates. Ecem Guzel won the Medal Race which was sufficient to give her silver, four points ahead of Nazli Donertas.

The duel for 470 Women’s gold went right down to the wire, with Frederike Loewe and Anna Markfort coming second in the Medal Race, ahead of Agnieszka Skrzypulec and Irmina Gliszczynska who were fourth. This put the two teams on equal points, but the tiebreak gave gold to Germany and silver to Poland.

It was much more straightforward in the Men’s 470. Mat Belcher and Will Ryan took a while to get up to full speed but the Aussie Olympic medallists ground down their opposition to win the 470 Medal Race and take the gold medal by 20 points ahead of the Russians, Pavel Sozykin and Denis Gribanov.

In the 49er FX, Charlotte Dobson and Saskia Tidey won gold in fine style, winning the Medal Race and beating the Rio Olympic silver medallists – Alex Maloney and Molly Meech from New Zealand – into second place. Tidey commented: “We teamed up in January this year and we’ve been working our way up the colour of medals so to win the gold today feels great.” Dobson added: “We wanted to get a good start and then go wherever the Kiwi girls went. It’s so easy for things to change on this race course, it’s so gusty and shifty, and you can never take anything for granted.”

David Gilmour and Joel Turner have been the masters of the Men’s 49er for most of the week, the Australians winning comfortably ahead of Lukasz Przybytek and Pawel Kolodzinski from Poland, with another Australian crew, brothers Will and Sam Phillips taking bronze. 49er rookie Robert Scheidt and Gabriel Borges started the week well, finishing the first day in third overall. But as the wind built during the week, so did Scheidt fall further down the fleet. However, the legendary five-time Olympic medallist from Brazil is still finding his feet on the skiff after a lifetime of sitting-down boats and he will gradually work out how to master the 49er, even at the ripe old age of 44.

Rio 2016 Olympic bronze medallist Thomas Zajac with new crew Barbara Matz has led the Nacra 17 fleet for most of the week and today the Austrians sealed the deal with victory in the Medal Race. Jan Erichsen and Ann Kristin Wedemeyer of Germany sailed to an easy silver ahead of bronze medallists from Russia, Maksim Semenov and Alina Shchetinkina.

Anders Pedersen sailed out of his skin to take the Finn medal race and almost managed to smash and grab his way to gold. But the Estonian Deniss Karpak did enough to clinch gold by two points from the charging Norwegian who took silver, just three points in front of Croatian sailor Nenad Bugarin. London 2012 Olympic Champion in the Star, Sweden’s Max Salminen started the day in pole position but slumped to fourth place, just a point off the podium.

It’s been a wild, windy week in Kiel and there has been some impressive talent in the Olympic classes. Some of them will be back in a month’s time for the combined European Championships in the 49er, 49er FX and Nacra 17 classes. For the Nacra, it will be the first time that the Olympic catamaran will be up and flying on its full-foiling package.