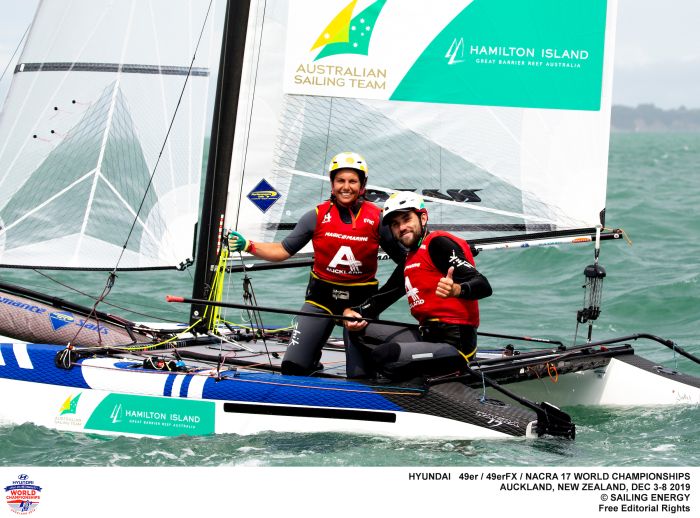 Challenging Auckland wind and waves played their part in determining the outcome of the Hyundai 49er, 49erFX & Nacra 17 World Championships. We have three winners, but anyone watching the groundbreaking live coverage will know that there were no runaway winners from this epic regatta…

Peter Burling and Blair Tuke have won a fifth world title to add to the four consecutive victories they enjoyed between 2013 and 2016. This will be one of the sweetest victories, however, not least because it’s on home waters, but also because of how hard the Kiwis were forced to work for this gold medal.

Erik Heil and Thomas Ploessel had made a bit of a mess of the previous day’s racing but the Germans really turned it on at the end of the competition. With Burling/ Tuke forced out of the first Gold Fleet race of the morning due to a broken tiller extension, the Germans had the opportunity to close the points gap. Heil/ Ploessel came from deep in the pack to record a ninth place and then were fast out of the blocks in the next race, winning that one at a canter. Fortunately for home fans Burling/ Tuke had recovered their composure to finish third behind the Germans.

This gave New Zealand an 8-point gap going into the double-points, 10-boat Medal Race, effectively a four-boat buffer on their German rivals. As good as in the bag for the talented New Zealanders, surely…

But no! While racing up the first beat the Germans forced the Kiwis to tack off and Burling slipped from his trapeze handle during the tack to almost capsize. Rounding the windward mark in ninth and out of gold medal position, Burling and Tuke turned on their downwind jets – moving up the fleet and with a few more passes were up into fourth. With the Germans in second there was nothing left that could be done by Heil and Ploessel. Burling and Tuke rose to the occasion despite showing some rare unforced errors, and were pushed hard all the way by Heil and Ploessel. After a bronze medal at the Rio 2016 Games, the Germans have displayed sufficient class to be able to dream of beating the New Zealanders to the top step at Tokyo 2020 next summer.

After looking like they might not even make the 25-boat cut for Gold Fleet earlier in the week, Diego Botin & Iago Marra (ESP) made the comeback of the regatta. The Spanish had a shot at the bronze medal if things went their way, and winning the Medal Race was the best way for them to conclude their time in Auckland. The 2017 World Champions Dylan Fletcher and Stuart Bithell (GBR) looked to be in trouble but the Brits finished 8th in the Medal Race which was sufficient to hang on to the last medal by a single point from the Spanish. At least the Spanish have done enough to secure a spot for the Olympic Games after failing to make the Gold Fleet at the previous Worlds in Denmark.

The 49erFX Championship was a prize fight between the Olympic Gold medallists Martine Grael & Kahena Kunze and the reigning World Champions Annemiek Bekkering and Annette Duetz. The Brazilians used some downwind magic in the first race of the morning to pull in front, but the Dutch sailed perfect beats in race two. The overall lead changed in both races with the Dutch ultimately taking a 2-point advantage into the Medal Race. In other words, no advantage at all, under the double-points format of the Medal Race.

With a who-beats-who medal race the Dutch and Brazilians were in lock step up the beat with wind and wave conditions getting even more challenging than the 49er race seen earlier.

The action started when race leaders and potential bronze medallists Tina Lutz and Susan Beuke (GER 29) went for their gybe and hit a wave midway through – forcing an expensive capsize. With the rest of the fleet hurtling toward the leeward gate the Dutch played it fairly safe and rounded but the Brazilians, hot on their tail, couldn’t release the spinnaker halyard and ended up in a spectacular capsize with Grael jumping clear of the boat as they flipped over the leeward mark.

Essentially the race for gold was over at that point, with the Dutch guiding their boat safely around the course to claim their gold.

The Danish team of Ida Nielsen and Marie Olsen took a second place in the race to pass the Norwegians and Germans to claim the bronze medal.

Bekkering and Duetz are now the only two-time 49erFX World Champions in the history of the skiff class, and they won the European Championship earlier this year as well. While Grael and Kunze are never to be ignored, the Dutch may have taken over their status as favourites for Tokyo 2020 next summer.

The Nacra 17 Medal Race was a three-way battle for gold, with only 3 points separating Bissaro/Frascari (ITA 5), Cenholt/Lubeck (DEN 71) and Waterhouse/Darmanin (AUS 2). Each of these three teams took different paths up the first beat, none of which worked out tremendously. However it was the Italians who were ahead of the Danish, with the Australians back in last place. The Italians shifted over in the second upwind and forced the Danes backwards with a tight cover on DEN 71. The Danes had one final chance to make the pass they needed on the final downwind, but the Italians were not to be denied and took Championship victory by just a few boat lengths.

For Bissaro and Frascari the victory couldn’t have come at a better time. For most of this Olympic cycle since Rio 2016, Tita and Banti (ITA 26) have been the dominant force. However, the outgoing World Champions struggled to find their form until late in the regatta. A victory in the Medal Race helped lift them to 7th overall, but Bissaro and Frascari have been the class act throughout the week.

Finishing last in the Medal Race meant Jason Waterhouse and Lisa Darmanin had to settle for bronze, six points in front of John Gimson and Anna Burnet (GBR) who led the early part of the week. Earlier in the regatta Gimson and Burnet had put themselves in the box seat for Olympic selection but the fast-closing Ben Saxton and Nikki Boniface (GBR) closed the gap by the end of the regatta, finishing 2 points and 2 places behind their British selection rivals. Sandwiched between the British crews in 5th place overall was Tara Pacheco and Florian Trittel (ESP), who are one of many that have a serious shot at an Olympic medal in the Nacra 17 next summer.

“The medal race wasn’t our best race,” said Lisa. “It was pretty windy, pretty choppy, quite shifty and we were under a big volcano. So it was tricky and we kind of got it wrong unfortunately. Then we just threw the dice a few times to see if we could get back in the game.”

Jason referred to the fleet as being “super hot” with nobody dominating and reiterating that they were going for gold. ”We went into the medal race with an opportunity to win which was what we set as our goal at the beginning of this week. We had nothing to lose – couldn’t lose the bronze – so we thought we’d go high risk and unfortunately it didn’t pay off. It wasn’t the result we wanted but in another way it’s exactly the result we needed this week so we’re very happy with a bronze medal and looking forward to Geelong.”

Lisa added: “We are happy with our speed. We made huge improvements around the racetrack here. There’s a few boat handling things we can definitely improve on and just some basic racing,”

The Olympic silver medallists are now turning their attention to the 2020 World Championships at the Royal Geelong Yacht Club in February.

“We’ll head down to Geelong early to play with everyone who’s down in the southern hemisphere.” Darmanin noted. “We definitely want to go two better.  It’s all eyes on Tokyo really, so we want to keep learning as many lessons as we can.”

The bronze medal was the only bright spot for Australia at these champs with Jason and Lisa the sole Aussie representatives in the medal races. Class rivals Nathan and Haylee Outteridge failed to progress from the gold fleet racing, ending up in 13th place.

“We didn’t sail to the level we needed to,” said Nathan. “It’s always a tough old way to end an event but we identified some issues that we had. We knew there were some weaknesses in our programme that got highlighted in the finals and that’s life.”

He concluded on a philosophical note: “Sometimes you need a result like this to really shake you and get yourself sorted.”

Despite being T-boned by the Danish crew yesterday, brothers Will and Sam Phillips bounced back to finish as top Aussies in the 49er.

“It’s just been wonderful being able to measure ourselves against all the other 49ers, said Will. “Everyone is continuously improving and there are some components with our speed that are quite good and we need to figure out some fleet racing-specific things which could really contribute to some lower scores.”

Now Geelong looms and the brothers have a plan. “We’ll try and keep the approach pretty similar really. The margins at the level we are trying to compete at seem to be quite small, so if we just make a few small changes I think they have the potential to make a large difference.”

The surprise package in the 49er for Australia were Jim Colley and Shaun Connor who performed beyond expectation – until the final day where they slipped from 12th to 20th.

“It is hard to finish such a well sailed regatta on such a challenging day,” said Jim. “But we are really making sure we don’t forget or lose sight of how well we sailed. We are really stoked with our overall performance and how far we’ve come in the last 9 months. While we finished today on a challenging note it’s almost just made us hungrier going to Geelong. It’s a bit hard to swallow. But we are going to come back stronger for sure.”

For the Australian Sailing Team’s High Performance Director Iain Murray it has been a difficult week culminating in a lack of qualifiers for the medal races. “Disappointing obviously. I think we had high hopes a day or so ago of being in the 49ers and an outside chance in the FX.  That hasn’t materialised so there’s some disappointment there,” said Murray.

“Clearly we are not consistent enough across all wind ranges which is what you’ve got to be in these multiple-race events. When you are holding 15,16 races and only dropping one, it’s all very well having the good ones but you can’t have the bad ones.”

Consistent was word of the week in Auckland, the numbers telling the story.

Murray again: “If you looked at most of the classes they are very high scoring so a 5th in every race would probably win the regatta. That’s called consistency.”

Murray is hoping for an improved showing in Geelong. “Geelong will be another set of conditions and it’s up to the good guys to adapt and generally they do.”