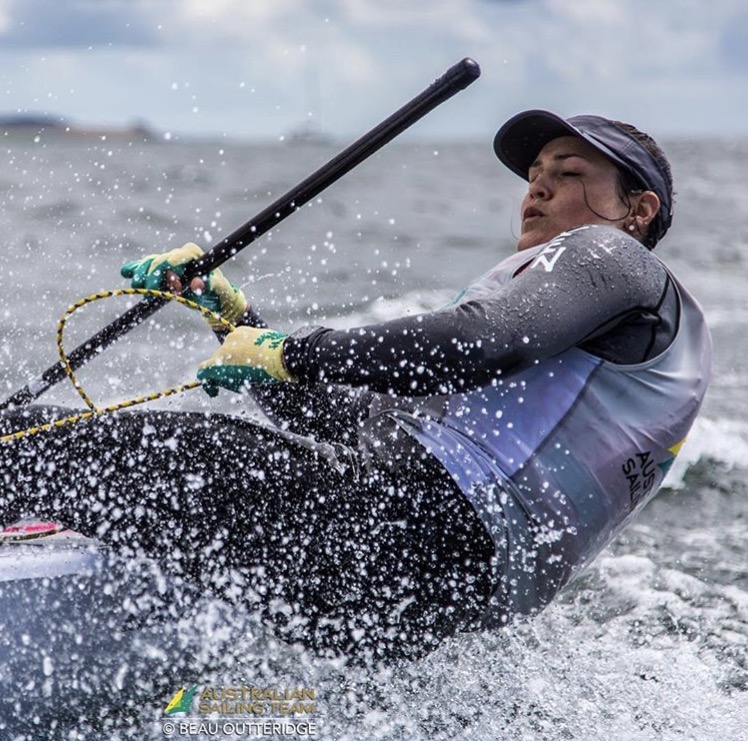 Ashley Stoddart in the Laser at Aarhus. Photo AS.

A strong contingent from the Australian Sailing Team will compete at this week’s 2017 Aarhus Sailing Week in Denmark, the test event for the 2018 Sailing World Championships to be held in Aarhus next August.

Heading the charge for the Aussies will be the 49er crews, who have had early success competing in Europe.  David Gilmour and Joel Turner will be looking to put their boat through its paces after winning Kiel Week, and then finishing second at the 49er Europeans last week.

Lachy Gilmour and Ryan Donaldson of WA will also compete at this event, alongside Will and Sam Phillips of Victoria.  A fleet of 36 49ers will take to the water tonight (AEST time) for the first three races of the series.

Meanwhile Australia will also be well represented in the 49erFX, with four Aussies crews competing in Aarhus.  Victoria’s Tess Lloyd and Eliza Solly will be looking to improve on their 11th position at last week’s European Championships in Kiel.  Haylee Outteridge and London 2012 Silver Medallist Nina Curtis of NSW will also line up in tonight’s first three races, alongside Caitlin Elks and Hayley Clark of WA and the NSW/WA combo of Amelia Stabback and Ella Clark.  25 boats will compete in the 49erFX.

In the Laser Radial, Ashley Stoddart will compete at her first major overseas event since the Rio 2016 Olympic Games.  35 boats will contest this class, with Stoddart lining up with three other young Aussies.  Fellow Queenslander, Mara Stransky; Marlena Berzins of NSW and WA’s Elyse Ainsworth will all compete.

“The quality of the (Laser Radial) fleet is good, with five of Rio's top ten here, including the gold medalist.”

Meanwhile in the Laser class, three Aussies are in Aarhus this week.  Rio 2016 Olympic Gold Medallist Tom Burton continues his path to Tokyo 2020, but he’ll face some stiff competition from West Australian Matt Wearn and Victoria’s Jeremy O’Connell.  Sydney 2000 Bronze Medallist Michael Blackburn continues to coach the Laser class and continues to build a strong squad of both experienced and ‘up-and-coming’ sailors to develop the team ahead of Tokyo.

In the Nacra 17 foiling class, Jason Waterhouse hopes to be fit to compete this week, after a recurring injury limited his sailing at last week’s European Championship.  Teaming up with cousin Lisa Darmanin, the Silver Medallists only raced two races together last week, with Darmanin sailing the bulk of the regatta with coach Darren Bundock.  However, the signs were good for Waterhouse and Darmanin in the two races they did complete, with some great boat speed and a win in one of those races.  The Aussies also have their eye on the Nacra 17 World Championship in France at the start of September, and having Waterhouse fit for this event will be of paramount importance.

In the Finn class, Rio 2016 Olympian Jake Lilley will return to Olympic class sailing at this event, after his involvement in the America’s Cup.  Lilley will line up in a fleet of 34 boats, including two other Aussies – Jock Calvert of Tasmania and fellow-Queenslander, Lewis Brake.  Oli Twedell of Victoria has withdrawn from the event due to injury.

In the 470 class, no Australians will compete in the Men’s event, while Rio 2016 Olympians Carrie Smith and Jaime Ryan will fly the flag for the Aussies in the women’s event.

No Australians will compete in the RSX Mens or Womens events. Racing commences in Denmark this evening (AEST) and concludes with medal races over the weekend.