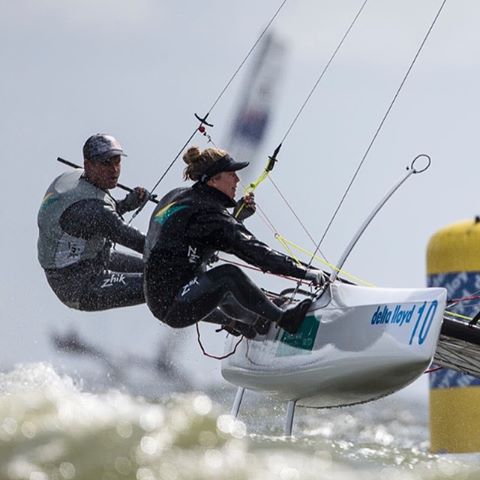 Despite the absence of their top sailors such as Tom Burton, Mat Belcher, Will Ryan, Iain Jensen and Nathan Outteridge, the Australian Sailing Team is in good shape after the second day at the Delta Lloyd regatta in the Netherlands.

In the 49er Joel Turner and Lewis Brake lead the competition, in the Laser Matt Wearn is in second place and in the Nacra 17, Euan McNicol and Lucinda Whitty are also in second, two places ahead of Darren Bundock and Nina Curtis. In the Finn, the two Australians vying for the Olympic berth, Jake Lilley and Oliver Tweddell hold fourth and fifth place respectively, while in the 49erFX Tess Lloyd and Caitlin Elks are fourth, with Haylee Outteridge and Sarah Cook in seventh.

Here is the official news release, with a link to all the results:

Annemieke Bekkering and Annette Duetz turned on the afterburners of their 49er FX skiff to take three wins from three races on the second day of Delta Lloyd Regatta in Holland.

After a blustery opening day for the 707 boats from 74 nations competing in Medemblik, the sun came out to play, and the breeze was slightly softer although still wildly variable in strength and direction. You might have thought that would make consistency difficult to achieve, but the unpredictability of the conditions did nothing to stand in the way of the Dutch 49er FX crew Bekkering and Duetz. Three bullets ensured they held on to their lead in the women’s skiff, although amazingly only by 1 point. Arch-rival for Olympic selection, Nina Keizer, also had a good day but, with regular Claire Blom recovering from minor knee surgery, Keizer is sailing in Medemblik with her coach, the highly experienced men’s 49er racer Francisco Andrade.

Six races completed in the women’s RS-X windsurfers, and the rising star from the Netherlands – Lilian de Geus – has won three of them. However, in the overall standings she’s still only a point ahead of two Polish sailors, Maja Dziarnowska and Zofia Noceti-Klepacka.

Continuing the theme of ‘threes’, Sweden’s Fritiof Hedstrom and Niclas During have surprised many of their more experienced rivals by winning three of their qualifying heats in the men’s 49er, displacing the previous overnight leaders from the top of the scoreboard, New Zealand’s Marcus Hansen and Josh Porebski.

The Swedes also rose to the top in the other men’s doublehander, the 470. This is familiar territory for Johan Molund, who couldn’t quite recall whether he had won Delta Lloyd Regatta three or four times before. “We always like it here,” said Molund. “It’s a beautiful clubhouse, the facilities are nice, and we just feel comfortable. Maybe everyone else is feeling the cold a bit more than us. It's been a rough couple of weeks in Sweden, so this weather in Medemblik feels like summer to us!”

The Swedes hold a big lead at the top of the men’s 470, and the same is true for Great Britain’s 470 crew, Sophie Weguelin and Eilidh McIntyre, who scored 2,1 to lead by 12 points. McIntyre said it was all about keeping the faith: “You needed to make commitment to your side of the course. It was easy to think – 'oh, we've lost out here' – when actually you had to hold out and not give up too soon. There were always early gains on the right-hand side, but you had to have faith that the wind was going to come.”

In the Nacra 17 catamaran, Denmark’s Olympic bronze medallist Alan Norregaard and Anette Viborg are the new leaders, thanks in part to a rare mistake by World No.1s from France, Billy Besson and Marie Riou, who were disqualified for crossing the start line too early in race 6.

Tomorrow the breeze looks set to blow hard, and quite possibly for the rest of the week. It’s what Delta Lloyd Regatta is famous for, some hard and fast racing on the choppy waters of the IJselmeer.