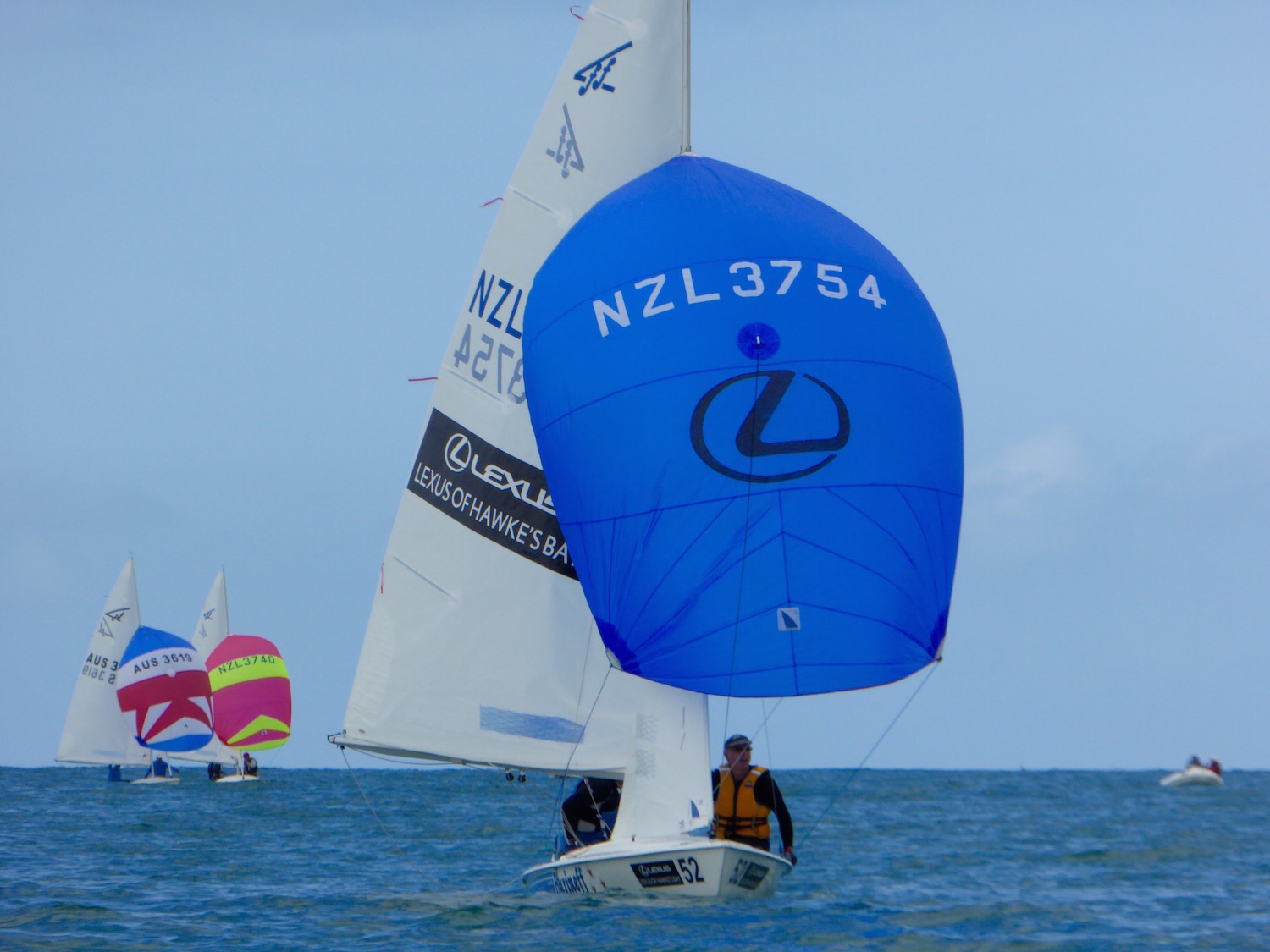 Another semi-overcast afternoon in Napier for the second day of the Lexus Flying Fifteen World Championship. Just one race held in light Easterly breezes between 5 – 8 knots.

After one general recall the PRO Gerry Martin, started race 3 of the championship under the U flag with all 57 competitors spread across the length of the start line. The first upwind leg was well spread but sailors who got off the line cleanly and into clear air, were keen to get to the middle right of the course, to take advantage of the breeze flicking right in Hawkes Bay.

The lead three broke clear to head down the run back to the gate as the breeze softened even more. Slowly the (three time) former world champion, Steve Goacher soaked down inside McKee & Hartland, to round a boat length in the lead at the gate. Kiwis Zorn & Robinson floated round in third as places changed behind them when the fleet converged under collapsing spinnakers.

The second work became a bit of a soldiers course, although picking the way through the shifts and keeping the boat moving in the light airs required a lot of concentration.

The order was the same at the top mark second time around but on the triangle leg via the wing mark the two lead British boats extended in their own private battle, whilst Zorn & Robinson had to work really hard to hold their third place. Other places in the top ten became much more intense as the breeze dropped below 5 knots. New Zealanders, Murray Gilbert & Jonathan Burgess from Royal Akarana YC in Auckland and the Queenslanders, Ashley Smith & Adam Kingston representing Hong Kong, made good gains.

Rounding the bottom gate, the leaders had an agonising 1nm leg back to the finish line. Goacher & Harper extended for a bit more breathing space, crossing the line to win their first race of the 21st Flying Fifteen Worlds. Mckee & Hartland settled for 2nd but the biggest celebration waited for 3rd place as locals Zorn & Robinson punched the air taking an excellent 3rd.

“We got a good clean fast start and sailed a short distance to clear the guys to weather of us and flicked on to port and hit the right hand side and were sitting pretty nicely,” David Zorn said. “It was really tense on the last lap especially with Murray and Johno, they are fast downwind, they were right on our tail at the bottom mark last time. But we knew where we wanted to go and knew the line we wanted to take and just stuck with it.”

Steve Goacher explains his race: “We had not such a bad start and a good clean first beat, we rounded the windward mark in second and managed to pass the leader downwind on the first run. I don’t mind the light conditions, they are enjoyable when you are in the front! I grew up sailing on Lake Windermere and we get a lot of light and fluky sailing conditions there.”

And on sailing in Napier for the first time: “I have been sailing 15’s since 1991 and won three world championships on the trot, 1995, 1997 & 1999 but I have never sailed in Napier. It has been very testing conditions, last week we had quite big seas and not a massive amount of wind.”

Race 4 of the championship is scheduled for a start time of 1300hrs (local time) with a similar forecast of light winds.