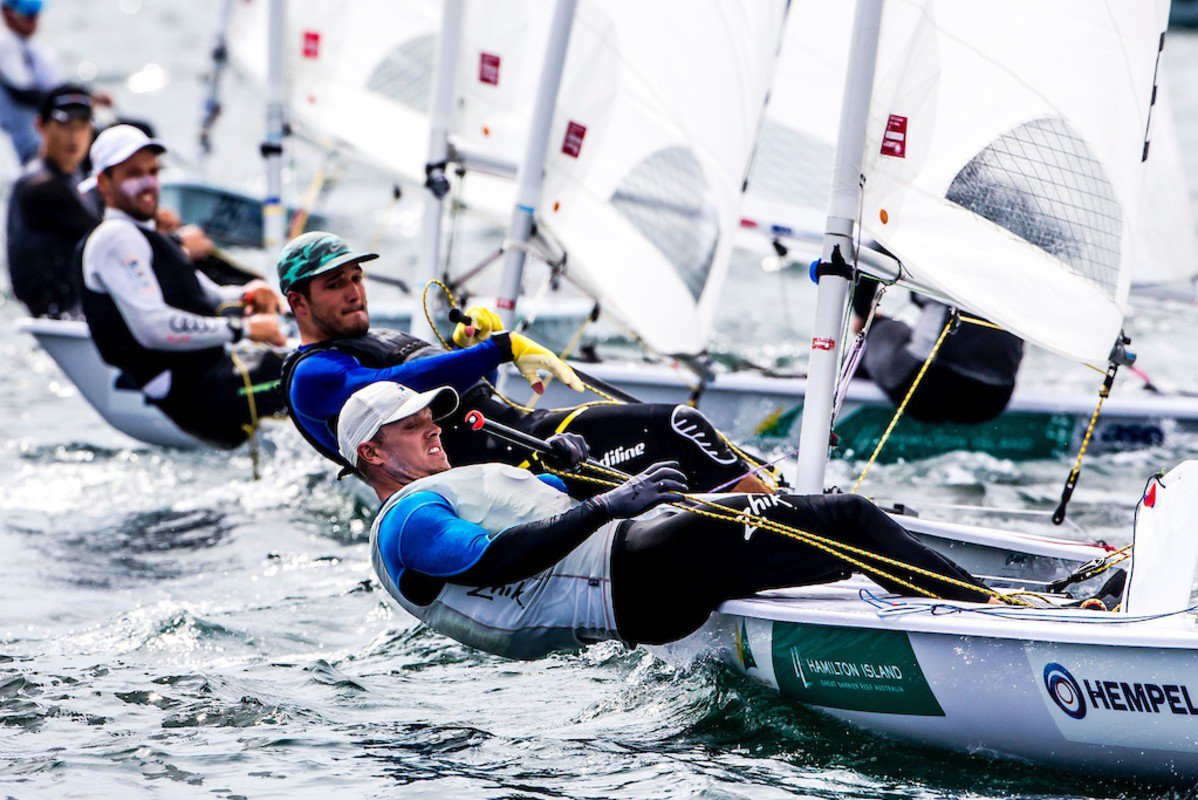 Tom Burton in the Laser at Aarhus. Photo World Sailing.

Day one of the Test Event began with clear skies and low wind speeds of around seven knots. The wind increased in the latter part of the day to 12 knots.

Races were scheduled to start at 1200 hours but due to the shortage of wind, races were delayed.

All ten Olympic classes managed to sail on the first day. The Finn class were last to arrive onshore, coming in at 1900 hours.

“We had light to medium conditions with flat water, which was ideal for the Nacra boats. We are testing the new Foiling Nacra so these conditions help us adjust to the new boats easily,” commented Tita.

In the Men's 470, David Bargehr and Lukas Mähr (AUT) concluded the day with four points, putting them in first place. The French pair of Kevin Peponnet and Jeremie Mion finished in second place, and Deniz Cinar and Ates Cinar, of Turkey, are third.

Linda Fahrni and Maja Siegenthaler (SUI) end day one with two points in the Women's 470, three points ahead of the Germans. Nadine Boehm and Ann-Christin Goliaß came second. Closely followed by Agnieszka Skrzypulec and Irmina Mrózek Gliszczynska (POL) who finish the day, third.

The 49er Class ended with William Phillips and Sam Phillips (AUS) in top spot after they won both of their races. The Danish pair, Joakim Salskov-Iversen and Markus Oliver Nielsen, finished second and Sime Fantela and Mihovil Fantela (CRO) third.

In the 49erFX, it is a Scandanavian top three of Denmark, Sweden and Norway. Denmark's, Jena Hansen and Katja Salskov-Iversen claimed first place, two points ahead of Vilma Bobeck and Malin Tengström (SWE). Ragna Agerup and Maia Agerup (NOR) finish the day third.

Jake Lilley was another Australian to leading the pack day one of the Test Event. The Finn sailor holds a one-point lead over the Hungarian, Zsombor Berecz. Alican Kaynar (TUR) sits third.

Conditions were much improved on the second day of the competition in the Bay of Aarhus with glorious sunshine and a breeze of 13-18 knots, gusting 23.

370 sailors from 54 nations racing across the ten Olympic classes are currently competing in the week-long competition at the Egå Marina, north of the city Aarhus.

Salskov-Iversen commented afterwards, “We had ups and downs during the day. The wind speeds were just right, but the waves were too big and quite hard to sail in.

“We managed to win two races, however we capsized in the other. Overall, we have learnt a lot today, so we are satisfied.”

In the 49er class, the Australians, William Phillips and Sam Phillips are still first, ahead of Benjamin Bildstein and David Hussl (AUT), who trail by 12 points. The Swedes, Fritiof Hedström and Otto Hamel end the day third.

In the Men's 470 class, David Bargehr and Lukas Mähr (AUT), also found the day challenging, despite leading, “We had a tough day, it was quite shifty on our race course. We had one good race, we finished second in the first race.

In the second race, we didn't have a good start and we ended up at the back of the fleet, it was difficult to catch up,” said Mähr.

France's, Kevin Peponnet and Jeremie Mion must settle for second, followed by Stuart McNay and Dave Hughes (USA) in third.

In the Women's division, Linda Fahrni and Maja Siegenthaler (SUI) maintained first position on the second day of compeition. Nadine Boehm and Ann-Christin Goliaß (GER) remain second and the Polish pair, Agnieszka Skrzypulec and Irmina Mrózek-Gliszczy?ska are in third place.

The Men's Laser, One Person Dinghy, is led by the Australians for the second day of the Test Event. Tom Burton remains first and Matthew Wearn finished the day's proceedings in second. Third place is held by Thomas Saunders from New Zealand.

It was a close battle between Hungarian, Zsombor Berecz, and Russian, Arkadiy Kistanov, in the Finn class. Berecz claims top spot with 10 points but Kistanov in just one point behind. Nicholas Heiner (NED) follows in third.