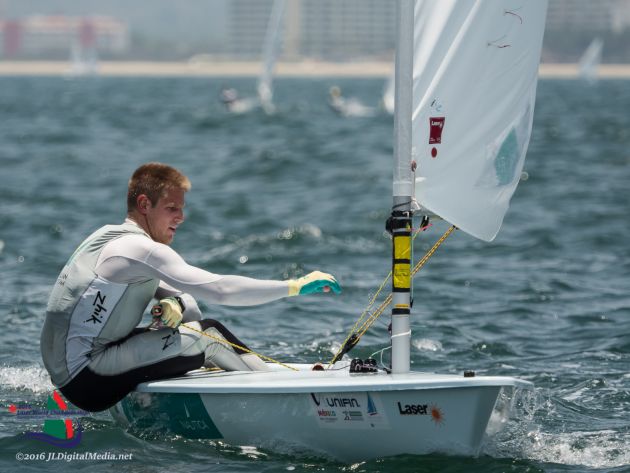 Australia’s Matt Wearn and Tom Burton continued their good run at the Laser World Championships in Mexico overnight, with both the Aussies moving up the Gold Fleet leaderboard during day five of racing.  Wearn is currently lying fourth overall and Burton equal fifth after 10 races.  There are two days of racing remaining.

Wearn posted two good results today.  After a challenging day yesterday, the West Australian came back to cross the finish line in second place in today’s first race, just behind the Cypriot Pavlos Kontides who won both of today’s races.

“The breeze started out much lighter today than previous days but it also ended up being the windiest day we have had yet,” said Wearn at the completion of racing.  “The first race was held in 6-10 knots, with the breeze building to 18-20 knots for the second race.

“It was great to have a solid result in the first race today. That helped settle the nerves a little and set myself on the right track for the days to come (in the gold fleet).

“There is still plenty of racing left and I am looking forward to the challenge ahead.”

Meanwhile NSW’s Tom Burton had a solid first race today, crossing the finish line in fourth place.  However, Burton found the second race of the day a little more challenging, getting caught in the middle of the fleet and crossing the finish line in 21st place.  With ten races now completed and two drops allowed, this result has been discarded from Burton’s overall scoresheet.  Australia’s Olympic team representative in the Laser class, Burton is currently on equal points with the Cypriot, Kontides; whose two race wins today moved him well up the leaderboard.

The fleet continues to be led by defending world champion, Nick Thompson of Great Britain, who is four points ahead of Frenchman, Jean-Baptiste Bernaz.  Brazil’s Robert Scheidt is currently in third place overall, but only three points ahead of Matt Wearn.

Other Aussies competing at the regatta include Mitchell Kennedy, who is currently 42nd; Luke Elliott 45th; Mark Spearman 46th and Jeremy O’Connell 47th.

With a total of 14 races scheduled for the regatta, racing continues tomorrow.  112 sailors from 44 countries are competing at the event.

Overall Results after 10 races with 2 discards

Overall results for the Australian Sailing Team and Squad at the 2016 Laser World Championship: