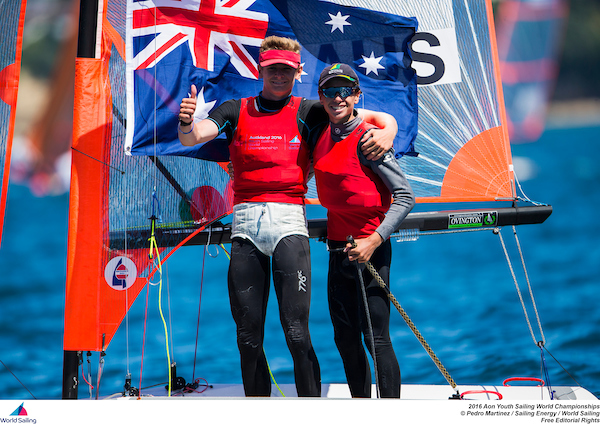 Australia’s up and coming sailors have clinched two Gold and a Bronze Medal at this year’s Youth Sailing World Championship in Auckland.

Leading the way for the Aussies was the 29er girls crew of Natasha Bryant and Annie Wilmot who won the gold medal with a day to spare.  The young Aussie girls, who hail from Royal Prince Alfred Yacht Club in NSW, had an impressive scorecard over the 13 race series.  The girls consistently finished top 10, and were only out of the top three in three races.  They finished 27 points ahead of the second placed Polish team.

“The Youth Worlds experience was new to us, but it wasn’t too unfamiliar as we’ve seen many of these girls at other events,” said Bryant at the conclusion of the regatta.  “We’re so excited to win, especially under such tight racing conditions.”

“We really had the full range of racing conditions this week,” said Wilmot.  “Over the regatta we experienced wind from every direction, across a range of wind speeds and some days we had flat water and other days big waves.  It was challenging but a lot of fun and really tested us out.”

“We’re now heading to Adelaide for the Youth Nationals,” continued Byrant.  “We’ve also recently got a 49erFX so if we requalify for the Youth Worlds next year, we’ll be training on both boats over the next 12 months.”

“Unfortunately I had an incident in the very first race and got disqualified,” said Alexander at the conclusion of the event. “That was the hardest point in the regatta and I had to bounce back from that.  Using your drop up in the first race isn’t ideal, so every other race mattered after that.  From there I just chipped away every day.  It was a really close, hard fought regatta, with all sorts of breeze – we sailed under every direction of the compass.  I haven’t quite got my head around it, but I’m really excited to win!

“In seven days time I head to Adelaide for the Laser full rig nations.  I’m done with youth sailing and into the big boys class – that’s where it all begins.  That’s super exciting!”

In the 29er boys event, John Cooley of Woollahra Sailing Club and Simon Hoffman of Belmont 16 Foot Skiff Sailing Club took the bronze medal in a highly competitive fleet.  The young Aussies only finished out of the top 10 on two occasions in 20 races, but were beaten by the impressive teams from Great Britain and France.

In the 420 class, Sophie McIntosh and Emily Summerell of Gosford Sailing Club finished 14th and the in the boys Nicholas Sharman of Mornington Yacht Club and James Grogan of Black Rock Yacht Club, VIC finished 17th.

Meanwhile in the RSX, Courtney Schoutrop of Royal Queensland Yacht Squadron was 18th in the girls event and Alex Halank of Georges River Sailing Club was 25th in the boys event.

Overall Australian finished seventh in the Nations Trophy, which this year was won by the Italians.

Results are available via the results centre here – http://www.isafyouthworlds.com/results/index.php