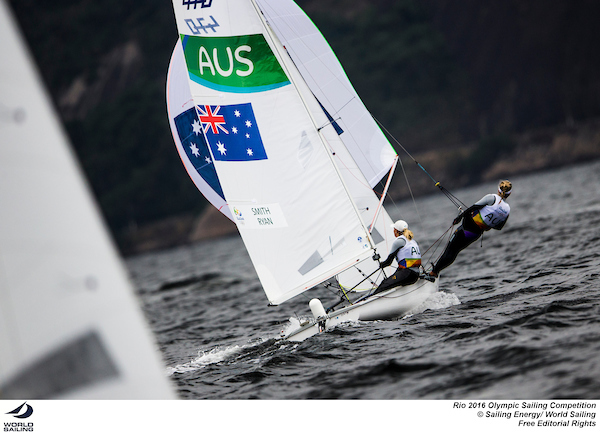 As the Australian Sailing team turns its focus towards preparation for the Tokyo 2020 Olympic Games, our sailors will be competing at the Kiel Week regatta in Germany this week.  Aussies will take to the water overnight in the 49er, 470 Men and 470 Women’s classes, as well as in the 2.4mR class at the Para World Sailing Championship, which runs concurrently in Kiel.

In the 470 Men’s event, Rio Silver Medallists Mathew Belcher and Will Ryan will line up in a fleet of 31 boats.  The Aussies, who won Sailing World Cup Hyeres and finished third at the Europeans earlier in the season, will be looking for another strong result.  They will be competing against ‘up and coming’ Aussies Chris Charlwood (WA) and Josh Dawson (NSW), along with a strong fleet that includes competitors from Japan, Germany, Switzerland, Poland, Russia and India amongst others.

In the 470 Women’s event, four Aussie teams will feature in the fleet of 19 boats.  Rio Olympians Carrie Smith and Jaime Ryan will be back in action together for the first time since the Games.  Also lining up under the Australian flag will be Dana Tavener and Katherine Shannon of NSW, Nia Jerwood and Monique De Vries of Western Australia and Shellee White and Emma Baillie of Queensland.

“This is our first time back in Europe since Rio, and it’s fitting because Kiel was our first event together as a combination last Olympic cycle.  Kiel Week 2017 will be our first big European event as we look towards Tokyo 2020, so it is special for us,” said Smith.

“Jaime is only recently back in the boat after some time out, so our main focus for this event is just to get back into sync with each other and learn as much as we can. It's a good warm up leading into our World Championships in a few weeks time.

“Kiel is an awesome event – very vibrant, a good atmosphere and very well-organised which makes this event even more enjoyable. We are really looking forward to getting back racing!”

While Australia’s Rio Olympians in the 49er class, Nathan Outteridge and Iain Jensen wrap up their 2017 America’s Cup campaign with Artemis Racing, two young Aussie crews will be competing in the 49er class at Kiel Week.  David Gilmour of WA and Joel Turner of Queensland will line up in the fleet of 78 boats, alongside Victorian brothers Will and Sam Phillips.  23 nations will be represented in the 49er class, with a few well-known international names including Brazilian Robert Scheidt who has won five Olympic medals in the Laser and Star classes.

“This is my first international event this year and the first time Joel and I have competed at an international event together,” said Gilmour ahead of racing in Kiel.  “We’re feeling well prepared – we have done a lot of work in Australia in preparation for this.  However, looking around at the fleet here, it looks as though a lot of the good teams from last quad are continuing, but there has also been a lot of new teams doing well in the regattas thus far this year. We have 78 boats here, which is a huge fleet for 49ers.”

Meanwhile the Para World Sailing Championships will also take place in Kiel this week, and three Aussies will compete in the 2.4mR class.  Rio Silver Medallist, Matthew Bugg, will line up in a fleet of 46 boats alongside Neil Patterson (VIC) and Michael Leydon (NSW).

Racing in all Olympic classes and Para World Sailing Championship events commences on Wednesday 21 June  and concludes on Sunday 25 June.  Approximately 4000 sailors from more than 60 nations are expected to be sailing in 50 different classes at Kiel Week.