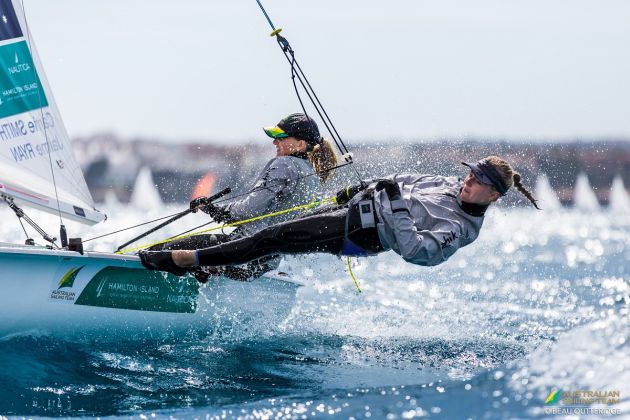 Australian sailors already part of the Australian Olympic team for the Rio Games and those still impressing selectors in the precious remaining months are in Palma, Spain for the 47th edition of the Trofeo Princesa Sofía IBEROSTAR for Olympic and Paralympic classes.

Sunday’s practice race on March 27 2016 precedes a week-long schedule that runs through to the medal races on Saturday April 2 in Mallorca’s bay of Palma, Spain.

Entries are unusually high for an Olympic year, a fact attributed to the regatta being a qualifier event for the Rio 2016 Olympic Games where the last places for European and African nations in each Olympic class will be decided.

Two European championships, for the 470 and 49er/49erFX, immediately following ‘Palma’ have also contributed to the record entry level in an Olympic year. The last time the event coincided with the Olympics back in 2012, 580 teams competed; this year 800 boats and 1,000 competitors representing 68 nations are registered.

For some nations, including Australia, the series counts towards national Olympic selection, Australian Sailing Team Performance Director Peter Conde said, “The Trofeo Princesa Sofia is important to different Australian crews for a variety of reasons.

“Some of the athletes already selected for the Rio Games will use the opportunity to fine-tune for their European titles straight off the back of Palma, while for those classes yet to be selected, the 49erFX, Women’s 470, Finn and RS:X, it’s another opportunity for those in contention to post results that show them in the best light for selection in May.”

Three Australian women’s 49erFX skiff teams, Tess Lloyd/Caitlin Elks, Olivia Price/Eliza Solly and Haylee Outteridge/Nina Curtis, will take on each other and the might of the best-ranked teams in the world, including number one and two on the ISAF FX world rankings, Brazil’s Martine Grael and Kahena Kunze and Denmark’s Jena Mai Hansen and Katja Steen Salskov-Iversen.

“This is my fourth year here; I know the venue pretty well,” said Elks. “Conditions can be really mixed, you’re never sure what to expect and it can be cold. The first two days are looking pretty breezy; nothing like survival of the fittest!”

The FX will make its Olympic debut at the Rio Games in August while in the male equivalent, the straight out 49er with the larger rig, Australia is the defending gold medal nation thanks to world beaters Nathan Outteridge and Iain Jensen.

Secure in the fact they are again part of the Australian Olympic team, the pair is at Palma putting together a brand new boat. Newly married Outteridge had this to say of his return to the venue for the first time since prior to the Beijing Olympics in 2008: “The beauty of Palma is it’s a split fleet regatta so we won’t be starting with a massive fleet, it will be pretty similar to the Olympic size fleet of 20-25. It can be cold at this time of year, the forecast looks like a mixed bag; windy at the start which can mean decent waves.

“This is the first big event of the season and with the way our schedule is working this year we want to get some racing in early. We’ll do this event then the Europeans in Barcelona, and then we’ll be able to focus our efforts on Rio,” Outteridge added.

West Australians Carrie Smith and Jaime Ryan contesting the 470 women’s class are also trying out a new boat. “We are testing some new equipment at Palma, which is a lead-in event for our Euros here at the same club,” said Smith overnight. “We want to do our very best at Palma; we are not taking it lightly.”