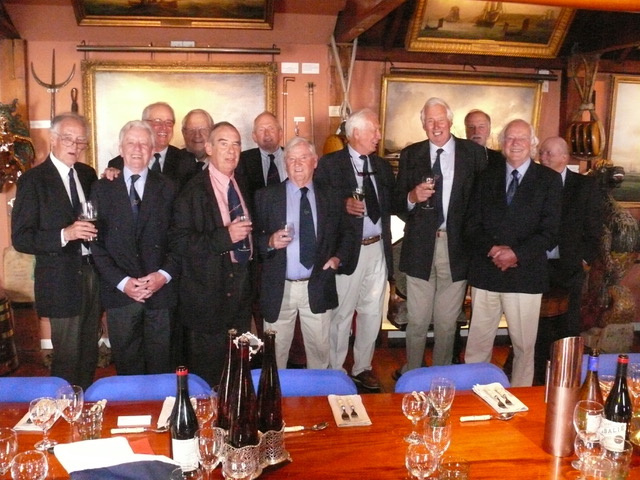 Former Admiral Cup sailors got together for the the fiftieth anniversary Auscrew lunch in Cowes. Pic - John Roberson

They came, they saw, they sort of remembered! Yes, they remembered each other and many good times in the past and they remembered how to get to Cowes for the Auscrew 50th anniversary lunch.

Some of the other memories were a bit blurry, probably more due to the excesses back then, than the sharpness of the mind today.

How many salty sailing stories can be told in one session? Well that depends on how long the lunch is and how many legends are telling the stories.

If you have a lunch that lasts from midday to 10:30pm and about fifty legends of yesteryear, there’s scope for a serious amount story telling, some of the stories undoubtedly apocryphal, but all highly amusing.

This was the fiftieth anniversary Auscrew lunch in Cowes, Saturday September 4. The line up of former Admiral’s Cup sailors was dazzling, names like George Stead, Pat Lilley, John Irving, Peter Nicholson… the list goes on. Of course, there were the ringleaders of this gathering, Peter Doran and Roger Motson and some very distinguished guests.

Sadly there were absent friends, some due to travel restrictions and others who have crossed the bar – a glass, well several glasses, were raised in their honour.

All those present were full of praise for the two organisers and very sentimental about the amateur Admiral’s Cup era in the sixties and seventies. No gathering of such legends from “back then” would have been complete without the fabled Admiral’s Cup itself, and the Royal Ocean Racing Club were good enough to allow it to make the journey to Cowes under the guardianship of Janet Grosvenor who was also a guest of honour at the lunch.

Ben Bradley, the former manager of Spencer’s Rigging, venue for several Auscrew parties in the seventies talked fondly of his friendships with Aussie legends Peter Shipway and Peter Kurts. He was on Britain’s winning Admiral’s Cup team in 1977, but sailed as local knowledge expert with three Australian Admiral’s Cup teams for the inshore races.

Paul Antrobus, who was a regular on Ron Amey’s Noryema commented, “This gathering here just brings memories back of those great days when the Admiral’s Cup was the one to win and we did it. This re-union brings it all back and makes it all worthwhile.”

One of the few who made it from overseas was Bermudian Francis Carter who organised Auscrew parties at the end of the Newport – Bermuda Races.

Peter Nicholson of Quailo fame summed up the mood of the day well, “Fantastic, I sat opposite Pat Jackson, crew boss on Quailo. We reminisced madly about Bermuda races together, Sydney Hobarts races together, Admiral’s Cups together. Where we made mistakes, the wrong tack, we could have won that race if we’d only tacked at the right moment. It’s been a wonderful day, great fun.”

Ben Bradley also told the story of how the key to the Hobart Town Hall came to be an exhibit in the Sir Max Aitken Museum in Cowes, and how 200 guests were locked inside until a locksmith could be found, because at the time this was the only key.

John Irving, who was involved in many Admiral’s Cup campaigns on various boats described the gathering as, “blissful, totally blissful. To see all these old faces and all these people still alive which is extraordinary, all looking younger than they should do.”

It is a day that will be remembered by all present for the bonhomie and for the fact that we can still party like we did 50 years ago – almost.