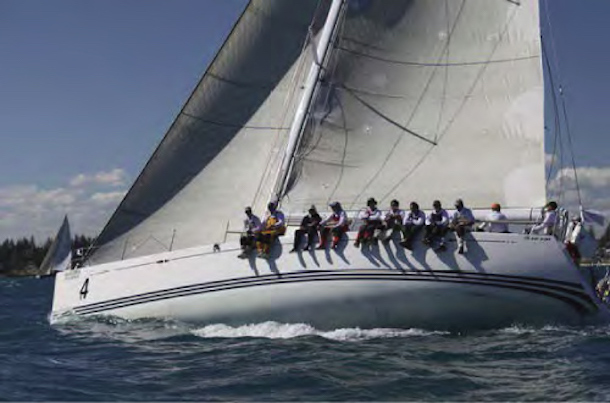 Is there a doctor in the house?  Well yes actually, there are two, both surgeons and both crewing on Audeamus and because of their prior commitments and despite having just 380nm to go in the 2015 Wonderful Indonesia Fremantle to Bali Race the skipper and crew have decided to retire Audeamus from the 1440 nautical mile event and are now motoring to Bali so the medicos can return to Perth. This is  crew decision that is a testimony to the comradeship that sailing engenders in yacht crews.

Their retirement decision means that Lisa Chamberlain and the Andeamus crew will unfortunately be denied the opportunity to possibly finish third in IRC and YAH the position they have fought for and held for much of the race. Thwarted in this instance by the light winds the entire fleet has been experiencing for the last 48 hours

Farther up the track Garth Curran’s Walk on the Wild Side is oh so close with just 11nm to the finish and in currently making 9 knots of boat speed looks fairly certain to finish in the next hour or so to take a very credible second over the line and provisionally a first in YAH and second in IRC.

Sue Sea with 370nm to go is now the next most likely race yacht to finish but with light winds dropping her speed to 2 knots it will be some time before she can expect to see Mount Agung the Bali volcano that is always such a welcome sight when sailing the Wonderful Indonesia Fremantle to Bali Race and Rally.

Audeamus’s retirement has passed the mantle of third in IRC and YAH to Max Palleschi's Prime Factor who has obviously put her late arrival at the start line in Fremantle well behind her with now 480nm to go but still experiencing light winds and low boat speeds of 5-6 knots.

In the Rally section Ron Given’s catamaran Playground is heading the rally fleet and while travelling at 8 knots in about 2 knots of breeze would appear to be making full use of their engine allowance. Current speed and distance should see her in Bali around midnight on Tuesday 26th May.

The 2015 Wonderful Indonesia Fremantle to Bali Race & Rally was delayed by 48 hours from its original start date due to severe weather conditions.