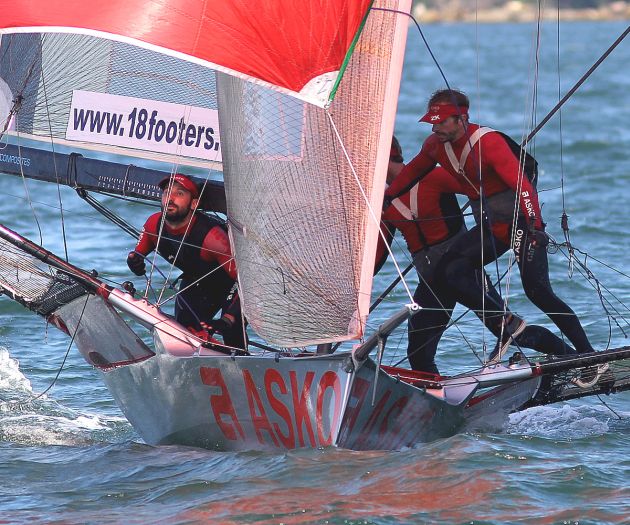 The racing at the 2016 JJ Giltinan 18ft Skiff Championship, sponsored by appliancesonline.com.au, just keeps getting better and closer with every race and the outcome won’t be decided until the last race of the championship on Sunday.

A 5-12 knot Easterly wind on Sydney Harbour today was the setting for yet another epic battle which wasn’t decided until the last few hundred metres of the course. Following a few disappointing results in the earlier races, the talented Asko Appliances crew of Marcus Ashley-Jones, James Dorron and Charles Dorron were back to their best when they took the hounours by a mere 17s. Smeg (Lee Knapton, Ricky Bridge, Mike McKensey) finished second, with the rookie Noakes Youth (Ash Rooklyn, Daniel Nixon, Rhys Mara) only another 16s back in third place. Early race leader, and defending champion, Gotta Love It 7 (Seve Jarvin) finished fourth, closely followed by De’Longhi (Simon Nearn) and Peroni (Nick Daly).

The championship is now at a critical stage with a lay day tomorrow and the final two races on Saturday and Sunday.

The long work from the start off Robertson Point to the windward Mark in Rose Bay produce the usual Easterly difficulties for the crews and the lead changed on a number of occasions before Gotta Love It 7 finally led as spinnakers were set for the downwind leg to the wing mark off Clarke Island. Asko Appliances was in second place, followed by Noakes Youth, Yandoo (John Winning), appliancesonline.com.au, De’Longhi, Alcatel One Touch (Stephen Quigley), Mojo Wine (James Ward) and Smeg.

Gotta Love It 7 was under pressure to retain the lead on the first part of the run (to the wing mark) and also down to the bottom mark off Kurraba Point. Despite the pressure from both Asko Appliances and Noakes Youth, Gotta Love It 7 maintained a narrow margin as the team turned for the second work back to Rose Bay. Yandoo and appliancesonline.com.au both held their positions behind the three leaders and were closely followed by a large group which included Alcatel One Touch, Smeg, Coopers 62-Rag & Famish Hotel, De’Longhi and Mojo Wine.

The second windward leg produced some amazing turnarounds as Gotta Love It 7, Noakes Youth, Asko Appliances and Smeg all led at one stage, or more. Seve Jarvin and his crew stayed firm and actually increased the lead at the Rose Bay mark and most spectators believed it would be a matter of how far the red boat would win by. Even at the bottom mark the second time, Gotta Love It 7 held a 20s margin over Noakes Youth, Asko Appliances and Smeg. Yandoo was still in fifth place, with Coopers 62-Rag & Famish, De’Longhi, appliancesonline and Thurlow Fisher Lawyers all close behind.

The two leaders sailed directly across the harbour towards Clarke Island while Asko Appliances and Smeg sailed further into the Athol Bay side of the course. Noakes Youth outsailed Gotta Love It 7 and took the lead then Asko Appliances came from the left and rested it away from the Youth team.

There was little between the group as they slowly worked their way into the light air in Rose Bay. Asko Appliances held a 35s lead as they headed for home over the spinnaker run from Rose Bay to Clarke Island but there was still plenty of sailing to be done as the leading four teams elected to sail a variety of courses.

Saturday’s race will probably give the championship a single leader, but whichever team holds the lead going into Sunday’s race it wont matter. This exciting championship will go down to the wire.

The club’s regular spectator fery will follow both races, leaving Double Bay Public Wharf, alongside the clubhouse 30 mins before the scheduled start time.

THERE WILL BE TWO SPECTATOR FERRIES FOLLOWING SUNDAY’S RACE.

Anyone planning to follow the racing during the championship, on the spectator ferry, should make sure they don’t leave it too late to buy their ticket.

There is Livestream race coverage of every race on www.mysailing.com.au.