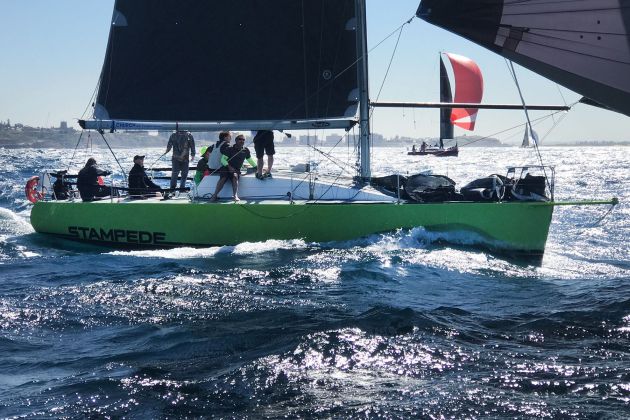 What better way to blow out the winter cobwebs, without blowing the budget, than to contest the annual Asahi Regatta hosted by Newcastle Cruising Yacht Club (NCYC).

Alternatively known as the NSW Country Yachting Championships, the event intentionally coincides with Hamilton Island Race Week to cater for yacht owners and crews in southern regions who can’t afford the additional time and expense of travelling north.

This year’s series, held August 24-25, attracted 17 entries from Newcastle and Lake Macquarie, and as far afield as Port Macquarie. Instead of the tradewinds of the tropics, they were greeted with a tactically challenging mixture of sou’easters and nor’westers of 12-15 knots, gusting to 30 for a short period on the Saturday.

The race schedule comprised four windward-leewards on the azure blue waters off Newcastle’s beaches, and a medium-distance passage race with a harbour finish. All were conducted under the professional eye of race officer Ted Anderson.

It was backed up by a bumper social calendar for which the NCYC – recent winner of the NSW/ACT State Sailing Awards’ Club of the Year – is renowned.

“Crews can kickstart the new sailing season with a quick road trip and enjoy up to five offshore races before their home club’s spring point-score gets underway,” club CEO Paul O’Rourke says.

“We’re within an easy day sail to and from the major ports north and south, and crews are rewarded with an excellent off-water vibe with Asahi beer, live music and great food at our club.

“We also offer some of the best regatta trophies going around, and our Asahi skippers jackets are fast becoming a collectors’ item.”

PHS Division 1 featured a compelling, series-long battle between brothers Richard and Will Howard, aboard the IOR Farr 40 Aurora and Beneteau 40.7 Schouten Passage respectively.

Aurora began with three consecutive wins, including the passage race, and racked up a 6-point advantage going into the final windward-leeward. Unfortunately, Schouten Passage was a non-starter for the race due to a crew member rushing to make his shift as an emergency doctor.

“We were able to hold ourselves with the bigger boats and have some fun with our regular crew from Lake Macquarie,” Sharp said. The PHS handicappers were a little harder on the yacht however, as it finished last in Division 1.

David O’Dowd, co-owner of She’s the Culprit, was equally impressed with the regatta, saying: “It was exhilarating racing and nice to get out on the ocean off Newcastle”.

Yachts from Sydney, Pittwater, Port Hacking and further afield are welcome to attend next year’s event. Details at ncyc.net.au.