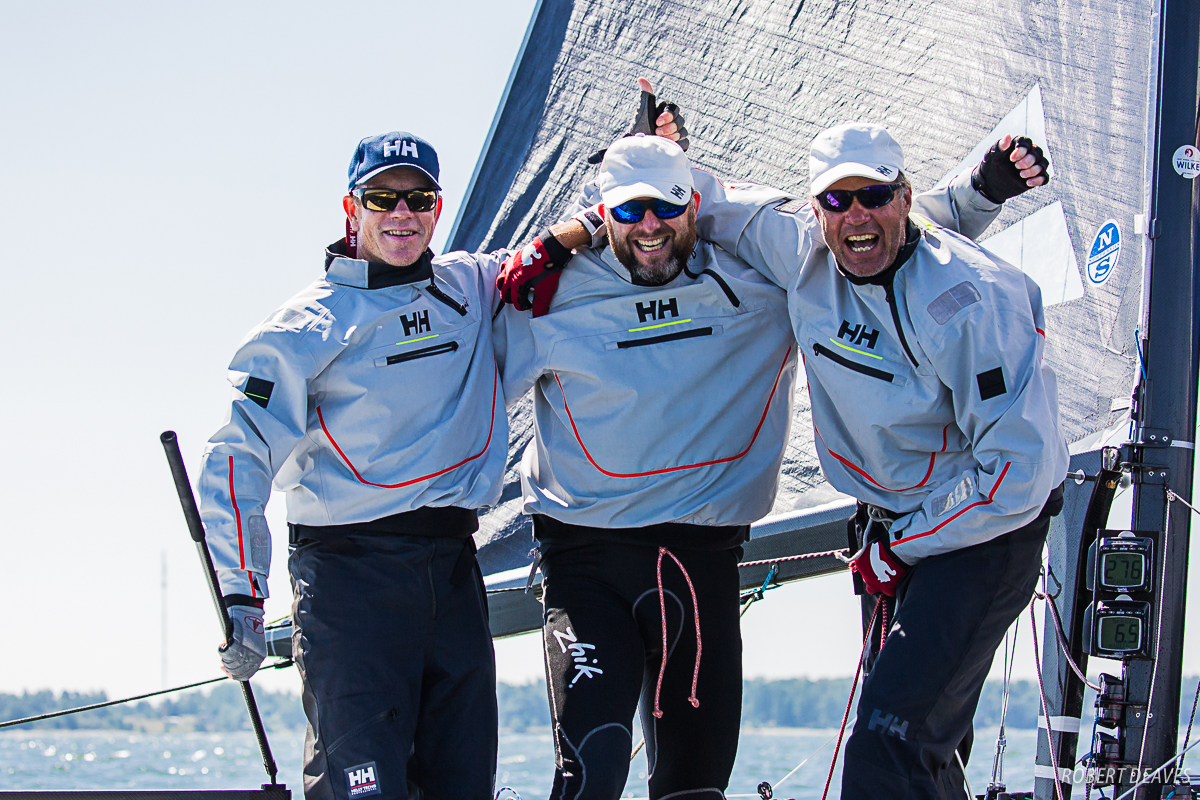 Two races were possible on the final day, but Nergaard and his crew got the job done in one race to win the Cup for the eighth time.

It was yet another bright, sunny and hot day in Helsinki with an early morning onshore breeze heralding another great day of racing. With temperatures hitting 30 degrees, the air was as hot as the competition.

The 100th Anniversary 2019 Scandinavian Gold Cup had come down to two boats, a mix of experience and optimism. One team has been together for more than a decade, winning many world championships and Gold Cups, and we were defending champions. Nergaard had already won the Cup seven times as helmsman and three times crewing for his father.

Hoping to overcome these odds was the new team on Girls on Film. It was only the crew's first year in the class and only its third regatta. But it was a crew full of experience and optimistic about their chances. It was a tall order but they were up for the challenge.

Artemis XIV attacked early in the pre-start but allowed Girls on Film to escape for the better start and trailed them to the top mark. On the first downwind Artemis XIV took both boats to the left, gybed and took the right gate while Girls on Film took the left.

At the next cross Artemis XIV was head and covered for the remaining two laps to cross the line with a comfortable lead and retain one of the biggest prizes in the class.

Helmsman of Artemis XIV, Nergaard explained the race. “We had a lot of discussion before the start about what we were going to do. Are we going to go tough match racing with the Brits or are we going to just do a regular start? And I think we made it a bit too complicated and they did a better job.

“I think with match racing you need to be careful as you can easily end up in a situation yourself and you make mistakes, so you are better off with some regular sailing, unless you really have a lot of experience in match racing which I do not have.”

“Anyway, we did a good job on the first upwind, catching up to Peter all the time. He was ahead at the top mark, but we were close to him and then we had a battle out to the corner, gybed on the inside.

“Then we chose the right bottom gate which was favoured and that gave us a little jump so that when we again met on the second upwind we were ahead and from then on we covered him and match raced him to build some distance. From then on we pretty much extended and the guys did a great job.”

On the second beat, both boats put in a huge number of tacks. “When you do this short tacking it’s all about getting the boat going, get up to speed before you tack again. On that second beat we were working on getting him to the right side. Then we could nail him on the layline to get even more distance.”

“It really feels good to win the Gold Cup again.”

This win is Nergaard’s eighth as helm and 11th overall. “I was very lucky to sail with my Dad for a long time and I’ve been in the class since 1989 and experienced both the Gold Cup and the Worlds. It’s been some good experiences.”

Looking ahead to the Worlds next week, “If you look at the statistics, if you win the Gold Cup then win the worlds…I think it’s happened maybe two or three times in the last 20 years, so we need to reset and don’t think about that going into the worlds.” With a smile he added, “But I think that’s great that not the same team wins all the time, but hopefully this year it will.”

He mentioned the prestige that the Gold Cup brings to the class. “There is something special about the Gold Cup. It’s been around a long time and we’re here in Helsinki on the 100th anniversary.

“There is a lot of history to it and it’s a beautiful trophy and we are very happy to have the Gold Cup in the 5.5 class and still sail for it, and of course to come back here and win the Gold Cup where it all started 100 years ago is such an honour.”

Two more races are scheduled for Royal Kaag Classic Cup and the Hankø Evolution Trophy on Saturday while the Moderns will sail the Pata Cup, a two-race invitation regatta organised by the NJK. Racing for the 2019 5.5 Metre World Championship begins on Monday 29 July with a 9 race series scheduled, ending on Friday 2 August.