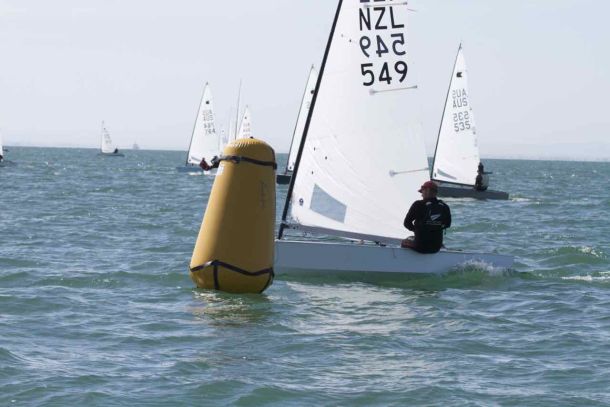 Following a long day of waiting for the breeze, the fleet at the 2014 OK Dinghy World Championship at Black Rock YC in Melbourne, Australia was finally rewarded by two great races in a rapidly building sea breeze. Matt Stechmann (NZL) leads overall after winning the first race. Matt Coutts (NZL) is in second while defending champion Roger Blasse (AUS) is in third. The second race was won by Stechmann's Artemis teammate Anthony Nossiter (AUS).

After losing the invitation race and first day of racing to strong winds and big seas on Port Phillip, the second day of the championship started in start contrast: flat seas and no wind. The fleet again waited patiently ashore for most of the day. Some sailors ventured out as a light 2-3 knots breeze filled in to try and encourage the elements into some action, but the wind was never strong enough for racing. Around 15.00 a southerly started to appear and slowly strengthened and the fleet was released at about 16.00.

The wind continued to build to 7-8 knots for the start of Race 1. After one general recall, the fleet got away under U flag with Matt Stechmann (NZL) crossing at the pin end and tacking to cross the entire fleet by a substantial margin. It was enough of a jump on the fleet to lead all the way round. He was chased by Jørgen Svendsen (DEN) and Greg Wilcox (NZL) but there was little they could do about his enormous lead.

Stechmann takes up the story, “I started four boats up from the pin and managed to have a bit of a gap. I looked over my shoulder and there were 74 boats to cross, so I tacked and crossed them and kept going and waited for it to come back and that was pretty much it. I was about a minute ahead at the top. Then I just kept between Jørgen and Greg and the mark. They made some gains downwind which I took back upwind. Once I was in front there wasn't too much to it really. I had a good lane and pressure and that just popped me out and put me in the lead.”

“At the end of the first triangle Greg has closed to about 25 seconds but I got the breeze straightaway and he had to tack to cover Jørgen, so that gave me some leverage on the right and I got a nice little shift that put 30 seconds on them right there to take my advantage back out to a minute.” Stechmann won the race comfortably from Svendsen and Wilcox.

The wind really started to build after the fleet finished the race and after a wait for the course to be realigned, Race 2 got underway in a solid 20 knots breeze and rising seas. These were fantastic conditions for the OK Dinghy and also to the liking to Anthony Nossiter (AUS). After rounding close to the front group at the top mark he took the lead on the final downwind from Roger Blasse (AUS) to lead up to the finish. Ben Morrison (NZL) crossed in third.

Nossiter explained his day. “That was my first race in an OK Dinghy since the Interdominions this time last year. First race off the start line and I got a yellow flag, So I perhaps need to sail more like a gentleman and be a bit less active. But it was good fun, plug and play, just like a Finn.”

“The second race was much windier and I won that one. I just tried to get free and sail how it feels good to me. I wasn't really sure what was the best way; a lot of the boats were going too high for me so I just sailed a bit freer and got the top at the business end and then just chipped away a bit and got past a few guys. It was really good fun, very gentlemanly sailing at the front of the fleet.”

“It was a good day for Artemis; we got two firsts today. I think we have different strengths though. Stech and I are 15 kg different in weight.”

It was a testing race for the fleet with some fantastic Port Phillip waves to surf down as the sun started to nudge the horizon. By the time the fleet reached the shore it was gone 20.00 and sunset followed shortly after as the sailors hurried into the club for some well-deserved fish and chips baskets.

Racing continues on January 2, after the scheduled lay day on New Years Day. Tonight the tired sailors are enjoying a New Year's Eve party at the Black Rock Yacht Club. With a day off tomorrow some of the sailors are planning a big night, probably in the way that only OK Dinghy sailors can. The less said about that the better, but all are happy that the 2014 OK Dinghy World Championships is finally underway. Happy New OK Year.