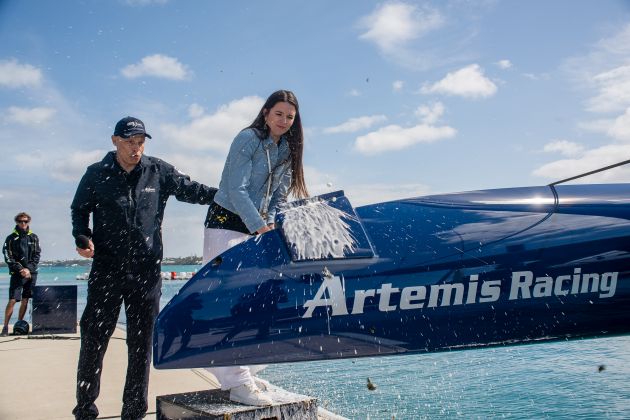 Torbjörn and Natalia Törnqvist at the christening of "Magic Blue". Photo Artemis Racing.

The launch sees the culmination of more than three years of intense design and development work, which began almost immediately after the finish of the 34th America’s Cup in San Francisco.

The new America’s Cup Class (ACC) yacht, which measures at 15m (or 49.2ft), is a development from the AC72s raced in San Francisco, retaining the wing sail and hydrofoils, which enable them to fly over the water at incredible speeds.

The design differences, or areas left for the teams to explore and innovate in the new Class, lie in the design of the appendages (foils and rudders), aerodynamics, and the onboard hydraulic and electronic control systems.

The hydraulic systems are required to be completely powered by human effort and combine traditional sailboat engineering with aerospace technology. Artemis Racing is thankful for support from a number of technical partners including Altair and Tactair.

The change of venue to Bermuda brings a host of new challenges with the varied, shifty conditions. The boats are flying and maneuvering better than ever before thanks to several years of additional development time along with supporting rules changes. This summer’s event is expected to be the most competitive and exciting America’s Cup in recent history.

The construction of Artemis Racing’s ACC began in January 2016 at Sune Carlsson Båtvarv, next to the team’s yacht club KSSS, in Saltsjöbaden, Sweden. The hulls were then flown to the US, and delivered to the team’s build facility in Alameda, CA, where the pod, beam and end plate were installed. It was then shipped to Bermuda, where it was reassembled and the final installation of the hydraulics and electronics took place.

Mark Allanson, Build Manager, commented: “With over 80,000 man hours in Design and Build it is fantastic to see our boat finally touch the water. Many parts of our new race yacht have already travelled thousands of miles globally; from the construction of our hulls in Sweden, led by Brandon Linton; to pre assembly at our Base in Alameda, California; and onto Bermuda for systems fit out. Getting to this point has required a huge effort from all members of the Team and we cannot wait to see her flying across the Great Sound in Bermuda.”

The launch was attended by Team Principal, Torbjörn Törnqvist, and Bermudian dignitaries including the Hon. Michael Dunkley, Premier of Bermuda.

Torbjörn Törnqvist, Team Principal, said: “It’s a great day of course, very exciting to see the result of so many years of hard work in design, engineering and construction; finally here. It feels good, and the boat looks fabulous. We are now on the home stretch so the phase goes from design and development, to sailing the boat as best we can.”

Although the launch marks a major milestone, the team is fully aware that in order to be victorious in June, it must continue to develop and refine its ACC right up until the final race.

Skipper, Nathan Outteridge, commented: “This day has been a long time coming, and I am so excited to see the boat in the water. Over the last three years we have spent countless hours on the water with our test boats, developing foils and control systems that we believe will win us the America's Cup.

“I have been watching this boat slowly come together here in Bermuda over the last few months, and It’s incredibly exciting to see this beautiful machine complete. I really would like to thank the design, engineering, build and shore team for their hard work in delivering the boat to us in race ready condition. It really has been a massive effort by the whole team and it’s now up to the sailing team to get out on the water and see what this incredible boat is capable of.

“I know that this will not be the end of our development. We saw during AC34 that there can be plenty of development in a short space of time and so we are prepared for that and looking forward to the next few months.”