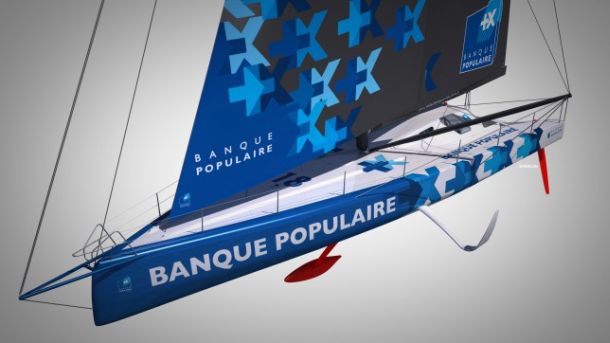 Second in the last two editions of the Vendée Globe, Armel Le Cléac’h has given himself the means to win the next race with his new 60 pieds IMOCA Banque Populaire VIII, which is now into the final stage of her construction. Packed with innovations, the VPLP/Verdier designed boat will be fitted with foils. After her launch planned for March, Armel Le Cléac’h will be tested in the 2015 Transat Jacques Vabre which he will race double-handed with Erwan Tabarly.

“The fact that we haven’t won yet, meant that we all wanted to get back out there, but this time with our own boat. I got over the 2012-2013 Vendée Globe and looked four years ahead, understanding how much of a challenge it was going to be and everyone wanted to be there.” As soon as the last Vendée Globe was over, Armel Le Cléac’h had one thing on his mind. He wanted to try for a third time in order to win. With this in mind, he set about building a new 60-foot IMOCA as that seemed to be the best option. This innovative boat has just been presented by Armel Le Cléac’h and the designer Vincent Lauriot-Prévost.

The choice of designers
Armel Le Cléac’h: “We went for VPLP Verdier because of their skill and they were nearby, as we needed to be in touch all the time. Their boats perform well and have always evolved. Banque Populaire wanted to work with a French yard, French craftsmen so we went for CDK. Once again, we can take advantage of them being close to us. We set about working with Safran to do certain things together, such as the tooling and the hull mould. The designers showed us the new features for the hull on which they had been working. Work began on the mould a year ago or eight months after the start of the project.”

An IMOCA fitted with foils

© JB EpronArmel Le Cléac’h: “The major innovation is the arrival of foils. The designers suggested these after the experiments in the America’s Cup and in sailing in general, where foils are becoming more and more common. The idea was to use these new technologies to take the weight off the hull at certain speeds and to allow acceleration. We did a lot of work with the research team and the designers, an dthe whole of the Banque Populaire team. This is a huge challenge, which initailly was very theoretical. We decided to carry out experiments with the Team. We chartered Sébastien Picot’s Mini 6,50 N°198 on which we fitted three daggerboards, one traditional one and two with foils to carry out trials from July 2014 under the supervision of Bertrand Pacé, to find out more. It was fascinating. It was complicated to set up and adjust and after a lot of attempts, we had some surprises. We went for one of the two options suggested by the designers. We added the foils to the construction in December.”

Vincent Lauriot-Prévost: “When the keel is canted windward, the keel blade generates some lift for the boat and to act against the heel, we have the foils making up for the loss of power. We regain the power by generating vertical thrust. The boat is therefore in “air” mode more than the previous generations. It has to correspond to certain angles and forces that we often find in the Vendée Globe, and the result is a huge gain in speed of several knots. The boat will not be more powerful, but will appear to be lighter with a smaller wetted surface as she is raised up by these appendages.”

A boat designed for the Vendée Globe
Vincent Lauriot-Prévost: “Rather than looking for a good all-round performer, we went for a boat that offers gains 60% of the time and slight losses 20% of the time.”

Ease of handling: a protected cockpit
Armel Le Cléac'h: “I wanted the cockpit to be protected and for the boat to be as dry as possible. These monohulls are usually very wet and you get the full force of the spray and waves. When sailing around the world, it is important to be able to carry out manoeuvres while protected by a sliding cover, with a helm that makes her easy to handle and that is well placed to offer good visibility. Spending a long time at the helm can make all the difference in spite of the efficiency of autopilots, as we saw in the final stretch of the 2012-2013 Vendée Globe.”

A bare interior
Armel Le Cléac'h: “I have made a lot of savings inside cutting down the comfort. We had to maje her light here. It has to be easy to stack. We repeated a few things from the previous boat. We have optimised the electronics and computers, everything inside and the energy systems… We have tried some new things such as a new type of cleat, although in a year from now we can always change our mind… We have plenty of time to get out there sailing early both racing and testing.”

The 2015 Transat Jacques Vabre 2015 with Erwan Tabarly
Armel Le Cléac'h: “I have known him for ages. We come from the same generation. We did a Solo Télégramme together and were both rookies in the 2000 Figaro. He has a lot of experience of ocean racing. He is very strong with a lot of determination and he’s a great bloke. I wanted to do it with someone I hadn’t sailed with before.  Erwan knows the team well. He can offer a new way of looking at my sailing.”