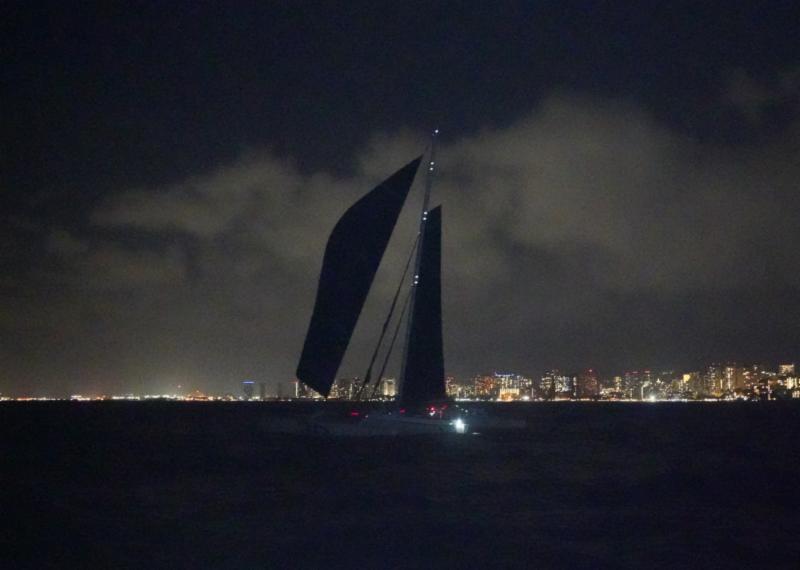 With the glow of Waikiki in the backdrop

19/07/2019
HONOLULU, HAWAII – After a slow initial start on Saturday, Jason Carroll and his team of Chad Corning, Thierry Fouchier, Anderson Reggio, Alister Richardson and Brian Thompson were able to push their MOD 70 trimaran Argo into the lead among two other rival MOD 70's in this year's 50th edition of the LA-Honolulu Transpac.
After several hours into the race and having to fight to get out of a wind hole on the first night, the team found the strong offshore breeze first to take a lead never seriously challenged during the entire race, playing a brilliant tactical game to also deftly stay ahead of their competition on the final approach to the finish.
Which was needed: Peter Cunningham's team on PowerPlay, a sistership MOD 70, finished just 29 minutes astern after 2225 miles of racing.
Argo's official finish time was 20:50:32 HST on Wednesday, July 17th, for an elapsed time of 4 days 11 hours 20 min 32 sec …a remarkable time considering their first day's slow start and only 5 hours behind the record pace set in 2017 by the ORMA 60 Mighty Merloe of 4 days 6 hours 32 minutes 30 sec.
This translates to an average speed down the course of 20.7 knots.