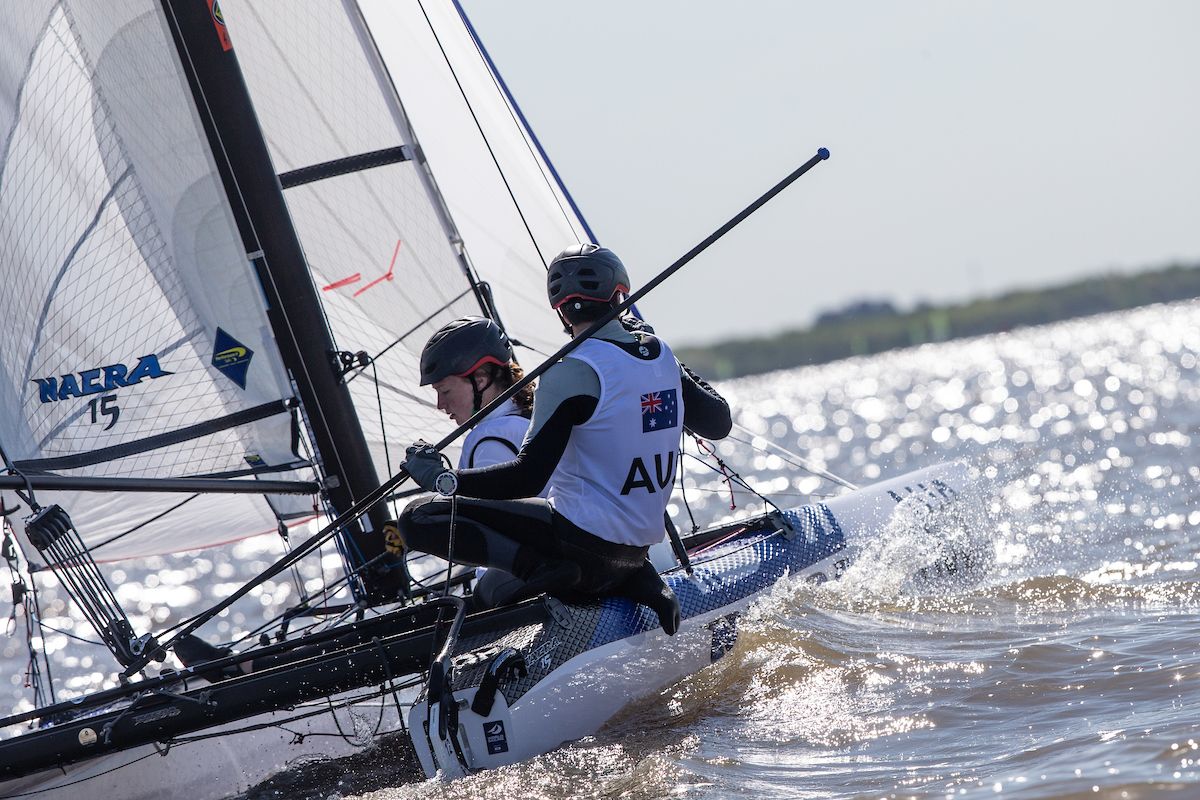 Will Cooley and Evie Haseldine in the Nacra 15 at the Youth Olympics. Photo © Matias Capizzano / World Sailing.

Argentinean athletes are coming to the forefront on their home waters as the breeze came to town on the third day of competition at the Youth Olympic Sailing Competition.

Held out of Club Nautico San Isidro, Buenos Aires, Argentina, the venue had the best conditions of the competition so far as all three classes were able to sail a good complement of races. The Techno 293+ managed a slalom race and a fleet race and the Kiteboarding were affected by the postponement of the fourth race at the end of the day.

The Mixed Nacra 15 fleet have now sailed five races overall – four of which took place today – and local favourites Dante Cittadini and Teresa Romairone are top of the leaderboard by three points.

Though Cittadini was satisfied with their day of racing, he acknowledged there was still work to do over the rest of the week.

“It was a difficult day; the wind was gusty and was changing direction, so we had to pay attention,” he said. “We’re happy as we had good results, but our starts weren’t so good, so we need to improve that.”

“We train from Monday to Friday all year and try to understand how the boat works, to know how to take advantage of it,” he explained. “We have something magic in this team; the kids are really talented and there are good vibes.”

Australia's Will Cooley and Evie Haseldine are currently sixth, with two third places to their credit.

The Windsurfing class opened proceedings by racing in the slalom single elimination format, where a series of heats are raced in order to rank athletes, who then compete in different finals based on this ranking.

Coming out on top in the Boy’s fleet was Belisario Kopp (ARG) and, although he took a UFD in the final fleet race of the day, he was pleased with his performance in the slalom event.

“I’m very happy to win the slalom, but I had a bad launch in the fleet race,” he said. “I want to enjoy the rest of the week and give it all the best for myself and for my country.”

Alexandros Kalpogiannakis (GRE) could only finish 13th in the slalom, but another win in the fleet race later in the day means he keeps top spot. Nicolo Renna (ITA) remains second, while Finn Hawkins (GBR) moves into third.

Veerle ten Have (NZL) won the slalom in the Girl’s fleet and Manon Pianazza (FRA) was victorious in the fleet race. The overall placings are unchanged from yesterday, with Giorgia Speciale (ITA) keeping the gold bib.

Elsewhere, both Girl’s and Boy’s Kiteboarding completed three elimination races as the rankings began to shape up.

Deury Corniel (DOM) is demonstrating why he was one of the favourites for gold ahead of the competition with three wins from three so far.

“Today was an amazing day and the conditions were perfect,” he said. “I’m really happy to be first place in the rankings, but for me it’s not about winning; it’s about the experience and what I can see with my eyes. It’s wonderful to be here.”

Racing continues at 12:00 local time on Wednesday 10th October, with all three classes scheduled to be on the water.