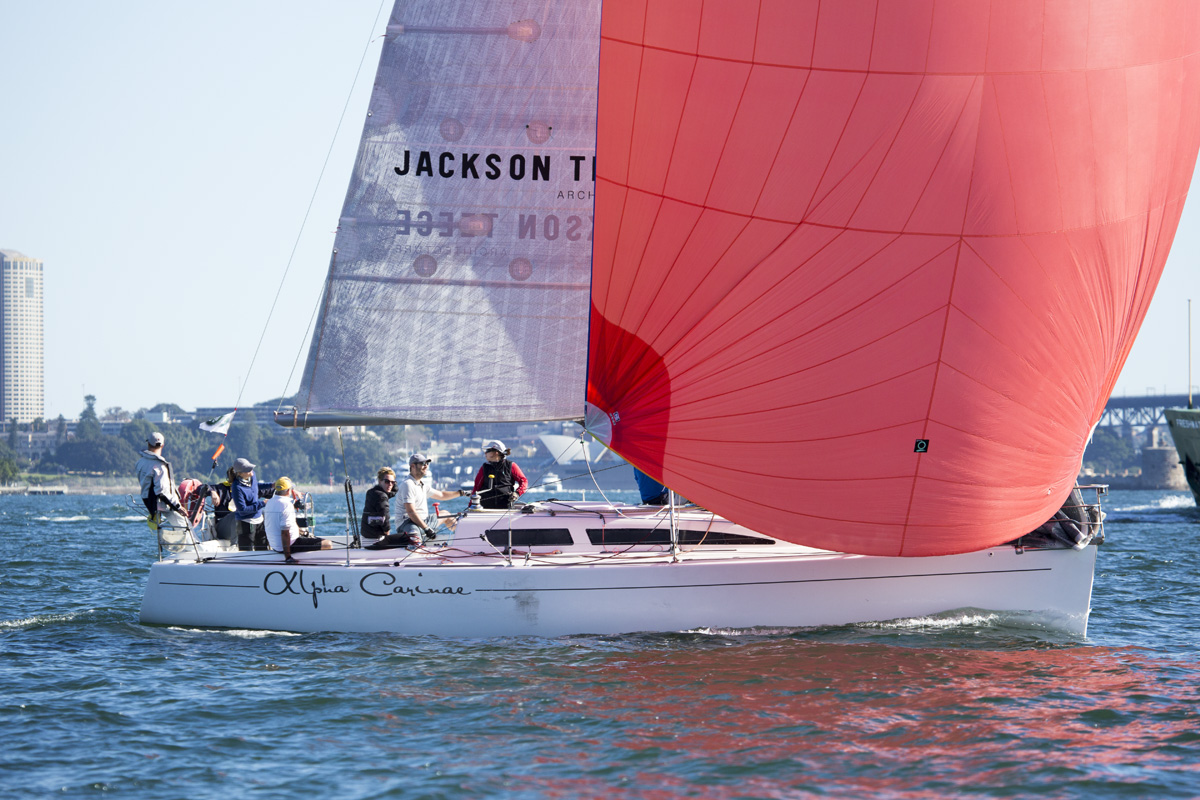 Alpha Carinae won the race and the Land Rover for a week. Photo David Brogan

In the second of three Ladies Day races in the Land Rover Winter Series on Sunday, Lauren Connors helmed her father’s yacht, Arch Rival, to victory in Spinnaker Division 1 over Race 1 winner, Last Tango, in the Cruising Yacht Club of Australia series.

Lauren, who normally crews in various positions for dad Steve on his Jones 39, said, “It was good to even the score with Last Tango (steered by Paula Dock). It will make it a very interesting final race.”

Lauren explained, though, that the win was no shoo-in: “We had a reasonable start, but it was very light and fluky with a lot of wind shifts. We were laughing about how different the weather was to last Sunday, when sailing was impossible because of the gale-force winds.

“Last Tango overtook us just after the start and we didn’t pick her up again until the last downwind leg, after we sailed closely for most of the race,” Lauren commented.  “I can’t say enough how good the crew work was – it was Dad’s usual crew. And the bowman didn’t make a mistake all day. It was a real team effort – it always is.”

Now Arch Rival and Last Tango will go head-to-head for series glory in the final race on July 17, when they will also sail for the Chris Lee trophy. Justine Anson helmed The Goat (a Rogers 46 owned by Bruce Foye and Sebastian Bohm) to third place.

In Spinnaker Division 2, Dee Pollett made easy work of the shifty 4-10 knot breeze to take the honours on Damian Barker’s Sydney 36 CR Alpha Carinae from Heather Rutherford at the helm of Next Light, the X35 owned by Derek Collins. Michelle O’Brien steered Peter Fallon’s Twilight Zone into third.

The groundwork is laid out for Alpha Carinae to sail off with Twilight Zone for the series win. Dee Pollett was also overjoyed to find she had been drawn from the winners to receive the Land Rover Evoque experience for one week.

“I am unexpectedly delighted,” she commented. The last time I won anything was when I was 16 – years ago. I’ve already told my boss I’m taking a week off to enjoy the Land Rover.

“I have to stress that the win was a team effort – it’s all about the team. We had a mix of regulars and ring-ins for the race and everyone got in and worked well together,” she said.

Pollett, who grew up sailing dinghies, said the two Ladies Day races are the only times she has steered a yacht in a race.

“It’s quite an experience, quite different to a dinghy, although I have been crewing on the yacht for the past six months. It was fantastic to steer and win and to have such a close race with Next Light,” she finished.

In Non-Spinnaker Division 1, Rebecca Tomkins finished atop the podium having skippered Richard Holstein’s Sydney 38, Next, to first place over the Mary King helmed Komodo, a Farr 40 recently bought by Jason King. There was just less than one minute between them when the handicaps were applied. Matt Wilkinson’s Farr 30, Foreign Affair, was third, steered by Lisa Wilkinson.

Shorething, a Northshore 38 owned by James Butler, won Race 1, so it is likely it or Defiant will take out the series. Pauline Christie steered Ken Hudson’s Tasman Young 43 to third place, but having missed Race 1, will not be amongst the money in the final.

Conditions on Sunday were in stark contrast to last week’s horrendous winds and rain, when CYCA officials were forced to abandon the race. This Sunday, the lady skippers found the going enjoyable.

Point Piper set the scene for the start on this Queen’s birthday long weekend. Ice cold sent shivers up the spine during the morning, but was improved by the pleasure of a hot breakfast cooked by the CYCA’s ‘Breakfast Club’. Then the sun came out and warmed up the day by the time the race was underway.

One lucky division winner will also be drawn to receive a week-long Land Rover Range Rover Evoque experience, while a second lucky winner will receive a lift stand launch and two free laydays, kindly donated by the Noakes Group.

The Land Rover Winter Series continues on Sunday from 11.25am with pointscore Race 7.