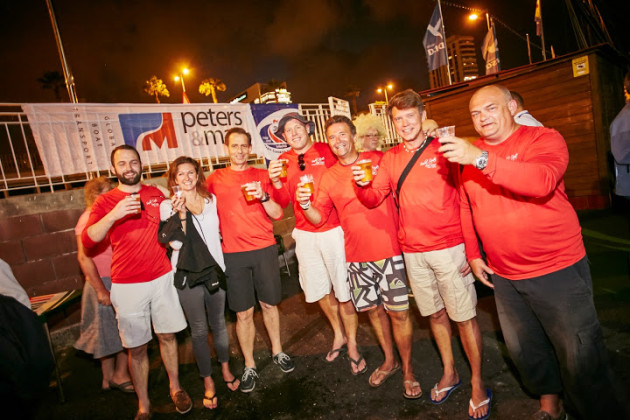 For sailors on the ARC+ route of the Atlantic Rally for Cruisers, last night's prize-giving ceremony in Saint Lucia marked the end of their Atlantic adventure that began in Las Palmas de Gran Canaria on the eastern side of the Atlantic six weeks ago. The alternative route to the traditional ARC route saw over 250 crew enjoy the same great activity programme before and after their ARC crossing, but also an interesting and enjoyable stopover on São Vicente, in the Cape Verde islands.

The ambience at last night's prize-giving reflected a large family party, everyone knowing each other so well within the smaller fleet of 59 boats. Participants were served ice cold fruit punch on arrival at the Pigeon Island National Park and relaxed with magnificent views out to sea and across the northwest coast of Saint Lucia.

Enjoying the warm evening, crews were invited to listen to the prize-giving under the covered grass area (thankfully the sporadic Caribbean rain showers held off for the night). Welcoming them to the ceremony, World Cruising Club's Andrew Bishop recounted a few tales as he worked his way through numerous awards. Dahlia Guard, Special Events Manager from the Saint Lucia Tourist Board, kindly assisted in presenting prizes to all the lucky winners.
Those visiting the stage to collect their prizes included Nix, who took Line Honours for leading the ARC+ fleet into Saint Lucia in an elapsed time of 10d 4h 51m 18s and Division winners Havhunden (Multihulls), Anorak (Class B), and Corona AQ (Class C) .
As is traditional in the ARC too, it was not just crews who were successful in the competitive side of the rally who received prizes; there were many other awards given out for happenings at sea, successes and achievements as well as recognising the families and double-handed crews who took part. The shortest distance sailed, and therefore closest to the rhumb line route, won a bottle of rum, whilst a joke picked up in a blog which involved a yellow shirt buying a can of deodorant won themselves just that!
Numerous participants took the opportunity of being on stage to say a few words to the assembled group, praising their own crew, congratulating all the participants as having crossed the Atlantic, and thanking the team of yellow shirts for their contribution to the success of ARC+2015.
The last participants to be called to the stage were the crew of Corona AQ who were given a special accolade in recognition of a unique achievement. Swedish skipper Pekka Karlsson sailed the same 32ft Corona AQ in the very first ARC in 1986, and again in 1995 and 2001; Having thought his transatlantic sailing days were over, together with his wife Barbro they joined the first ARC+ in 2013 as he wanted to visit the Cape Verde Islands and the newly introduce route choice gave him the opportunity to do that!
Pekka and Barbaro enjoyed the split route so much they agreed to come back and sail again this year to join in the celebrations of the 30th ARC, sailing the Cape Verde route, helped by their crew member Tomas Nilsson. As they arrived on stage, they received huge applause from their fellow crews and afterwards an emotional Pekka took Andrew aside to thank him for the recognition and simply said “My English is not good enough to explain how I feel right now”.

After the awards were complete, the bars were opened and ARC+ participants celebrated together to the rhythm of a steel pan band. But the evening's excitement did not end there as participants from eighty five boats sailing with the ARC direct route started to arrive for their Welcome Party.

Even after over two weeks of ocean views, the lush National Park setting for the party could not fail to impress. “Truly spectacular” and “Good choice of venue” were typical remarks overheard as the Saint Lucian view certainly lived up to its 'Simply Beautiful' reputation. Reinforcing the importance of the rally's visit to the island, the Minister for Tourism, the Honourable Lorne Theophilus, attended the party and gave the keynote welcome speech.

Paul Ash, General Manager of IGY Rodney Bay Marina, the host marina, echoed the welcome and Lawrence McNaughton General Manager for SOL, spoke on behalf of all the local ARC sponsors. Andrew Bishop, Managing Director of World Cruising Club, took to the stage once again and acknowledged the new course record set by Team Brunel and congratulated all those who have arrived to date, whilst also sparing a thought for those still at sea. He gave a special thanks to the hosts in Saint Lucia who embrace the ARC arrivals each year and finally encouraged participants to stay to enjoy the evening's entertainment and have a great time!
With that, an awesome performance from tribal dancers including fire eating and limbo dancing delighted crews and rounded off a wonderful welcome to Saint Lucia!