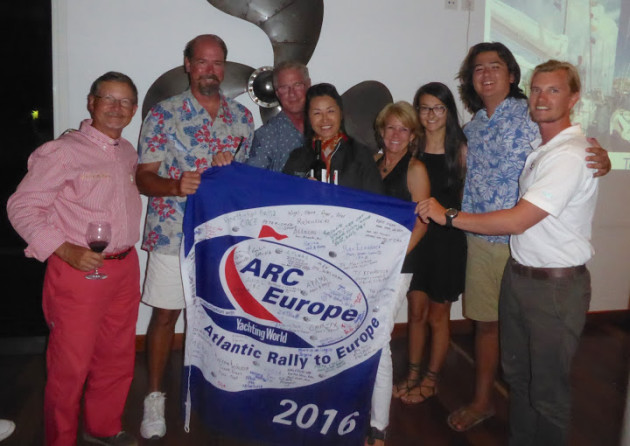 ARC Europe 2016 ended with a packed final prizegiving dinner at Marina de Lagos on Sunday 19 June where close to a hundred crew from twenty-three yachts enjoyed a celebratory end to what has been a memorable rally. Being a multi leg event the atmosphere and camaraderie is very special, made more so by the mix of routes, stopovers and nationalities taking part. Those on the rally are at the varying stages in their cruising plans, with World ARC circumnavigators completing their voyages, Europeans sailing west to east at the end of a north Atlantic circuit, and North Americans just starting out on their adventures sailing to a new cruising ground. Stories and experiences are shared throughout the rally, and the participants enjoy getting to know each other very well, in part thanks to the numerous tours and activities on the comprehensive social programme at each port.
It was six weeks ago that forty-four boats set sail from Nanny Cay Marina in Tortola, with flexible route options allowing multiple fleets to begin their adventures in company. Venturing west to east across the Atlantic with ARC Europe 2016 twenty-six yachts departed from Tortola and three from Portsmouth, Virginia, USA. The fleets then converged in Bermuda with a further two boats joining to continue to the Azores and onto Europe.
As part of ARC USA, eleven boats sailed alongside the ARC Europe fleet to Bermuda, and then onto the US East Coast. For the first time the majority of these were cruisers planning to visit the USA, rather than Americans returning home. This leg of ARC USA finished in Portsmouth, where World Cruising Club were on hand to help with arrivals, and host a final dinner before the yachts started their own cruising itineraries, including a group of three returning to Europe on a northern route via Newfoundland and Greenland. Seven boats sailed under the ARC USA banner with rally support from Nanny Cay directly to Fort Lauderdale, Florida, via the Old Bahama Channel and departed a day ahead of the Northern bound group, arriving in Bahia Mar Marina for their own celebrations following just under a week at sea.
Those arriving in Bermuda received a warm welcome and crews enjoyed a Dark n'Stormy or two and time to explore before taking the opportunity for a duty free refuel and to re-provision. On 17 May, thirty-one ARC Europe yachts continued to the Azores, 1800NM away, including the smallest yacht in the fleet Blue Mist (USA), which had not stopped in Bermuda. The end of this longest leg of the rally was dominated by a series of low pressure systems which saw the tail end of the fleet being at sea in some tough gale force conditions, with plenty of tales to be told of their experiences on arrival. The clear message was how pleased the crews were with the performance of their boats in the conditions.
Strong winds continued to dominate the cruising period in the Azores, with Terceria island missed as the fleet made a dash from Horta direct to Ponta Delgada, enjoying an extra day there where farewells were said to those returning to northern Europe. Those heading to southern Europe and the Mediterranean continued to Santa Maria, from where the final leg to Lagos would start. Despite the fleet's adapted itinerary for the cruise, there was still time to explore these magical islands. Sylvie Furtado from Second Wind (VGB) reflected on their time, “The Azores islands are great places to visit or even retire. Every island has something to offer. For me, food is number one then followed by the scenery. When you travel that far by boat, land time becomes very important, one good reason to join the ARC Europe and have all these social events with your fellow sailors. These were filled with joy, information and great stories.“

The final leg to Marina de Lagos began on 12 June with 23 boats underway once again. After experiencing very light (and occasionally non-existent) wind for the first 48 hours, they were able to sail the rest of the leg on a comfortable ride with strong northerly wind at 20 to 25 knots abeam. On rounding Cape St. Vincent strong winds caught some boats off guard, with damage to different boats including a broken spreader, broken boom and torn sails. Everyone was pleased to arrive to the warm welcome from the staff at Marina de Lagos.

During the final prizegiving dinner all the boats were recognised in a speech by event manager Victor Taburiaux, including Blue Mist who despite making a valiant effort to catch up were still at sea. Prizes were awarded for fun competitions and results on the last leg, with the most coveted prize of “Spirit of ARC Europe” going to George Gamble and the crew of Testarossa (USA) for their varying contributions towards the morale of the fleet throughout the rally.
The ARC Europe 2016 fleet have been through some tough weather challenges, but visiting some magnificent ports en route and enjoying the camaraderie of sailing together has helped form many great friendships between the crews. It was evident from the atmosphere at the final prizegiving that everyone has enjoyed sailing the Atlantic together, having a very fun time along the way, with plenty of salty stories to share and memories to treasure from their time on the rally.
– WCC Media