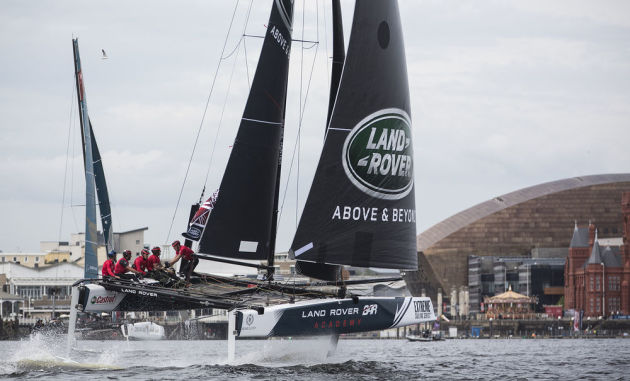 The young guns of Land Rover BAR Academy got their first taste of how intense the Extreme Sailing Series can be as Act 3 got off to a sensational start in Cardiff.

With the 2016 season resuming in the Welsh capital after two thrilling events, a fresh crop of talented British sailors were handed the chance to represent Sir Ben Ainslie’s youth development squad against the tour’s more seasoned teams. But there were no warm welcomes for Land Rover BAR Academy on the notorious Cardiff Bay racecourse as they were treated to a baptism of fire from both their rivals and the weather gods.

Over the four years Cardiff has hosted the Extreme Sailing Series previously it has become renowned for delivering big breeze – and today was no exception, with gusts of up to 20 knots blowing across the course. It made for testing racing as the crews struggled to tame their superfast foiling GC32 catamarans, but a fantastic show for the spectators lining the shore of the famous stadium venue.

“It definitely got hairy out there – it was a real eye-opener,” said 19-year-old Land Rover BAR Academy helmsman Owen Bowerman, whose team go into day two in sixth place overall. “There was one point when Alinghi crossed right in front of us and it all got a bit sketchy.

“There were times when we made mistakes but the energy and effort from the team was what really mattered. It was an awesome day with the team, a great experience – we learned a huge amount.

“This is an event you can only dream of being part of and to be able to steer one of these boat around one of the world’s most competitive racecourses is unbelievable.”

The only senior member of the crew onboard was Paul Campbell-James, drafted in from Ainslie’s America’s Cup team to mentor his young team mates. “It was certainly exciting – we really threw the boys in at the deep end,” Campbell-James said. “It doesn’t get much harder than what we had today. The results weren’t the best but we were really fighting and with every race we got better.”

Meanwhile it was the familiar faces of Oman Air and Red Bull Sailing Team once again showing their dominance at the front of the fleet. “It just felt good today,” said Oman Air skipper Morgan Larson, whose crew top the Act 3 standings thanks to five race wins. “The course was short and things happened fast and furiously, but the guys onboard did a top job.”

Talking about the value of experience, Larson continued: “When the wind blows it shows which teams have spent more time in these boats. If we get a few lighter races we’ll see the newer teams right back in the mix.”

Roman Hagara, skipper of second-placed Red Bull Sailing Team, added: “It was full on today but the crew did a really god job around the course keeping everything together which is really important on these short courses. Alinghi and Oman Air are doing a great job and we will have to push hard all day long if we want to keep up with them.”