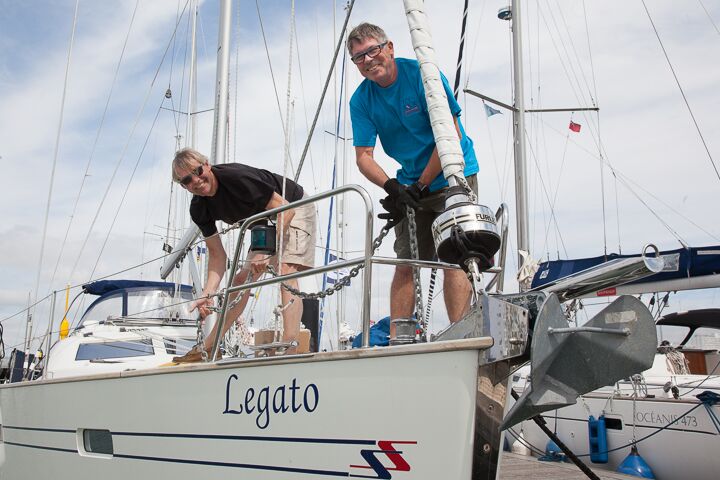 Getting ready for the ARC at Gosport. Photo WCC / Clare Pengelly.

15/08/2017
There were smiles as well as butterflies amongst the skippers and crews of the 2017 ARC Channel Islands rally, as they prepared to set off for the first of two Channel crossings on Saturday 12th August. An early morning departure added to the excitement of the occasion as boats slipped lines and headed out from Haslar Marina, Gosport, aiming to make the most of the daylight for the 70nm passage to Cherbourg. A grey drizzle lifted by 9am and sunshine stayed with the fleet, all of whom were able to lay Cherbourg in the west to north-westerly breeze.
ARC Channel Islands, which is run in association with the RYA Active Marina programme, aims to encourage cruisers to reach-out to sail in new areas and extend their cruising horizons in a safe and social environment. For many of this year's ralliers, the crossing would be their first time across the Channel skippering their own boats. Ali and Ean Lewin, from Lancashire sailing Beneteau 38 Doodles of Hamble, were keen to build their experience by sailing double-handed in the rally, having sailed for four years up and down the English coast and chartered in Greece and Croatia previously.
The smallest boat in the fleet is Waarschip 740 Ocean, Flotaxe, sailed by Willem Bijl, originally from the Netherlands, but now living in Essex. Having built and fitted out the boat himself, Willem was confident of his boat's abilities. “I know my boat inside-out and feel ready to take her further,” commented Willem.
A pre-rally seminar in April gave crews a chance to hone their passage planning skills and prepare their boats and safety equipment for the Channel crossing. In Gosport prior to the rally's departure, Yachtmaster Instructor Roger Seymour from Hamble School of Yachting, was available to check navigation and passage plans, and look over boat preparation and equipment; a useful double-check for all the skippers. Alongside the team from rally organisers World Cruising Club, Roger sails the whole rally on board the lead boat provided by Hamble School of Yachting.
Once clear of Bembridge Ledge and with bows pointing toward France, crews picked up the rally spirit with friendly radio chatter about dolphin spotting and general progress reports, reinforcing the ethos of cruising in company. Ashore, family and friends were able to track the boats across the Channel via the YB satellite trackers provided by the rally. “I'm happy to say that the YB tracker proved our passage plan to be the right one and that we managed to stick to it. After so much preparation, it was a massive confidence boost,” commented Pete Leggett of Southerly 42 Legato on arrival in Cherbourg.
All boats except the 7.4m Flotaxe were docked in Cherbourg by 8pm local time on Saturday, with the plucky little Waarschip 740 in by 10pm. Strengthening winds over a strong tide gave crews a challenging finish to a long day.  Dinny Read, another double-hander sailing Honey of Embleton with her husband John, spoke once docked “The lifelines that we discussed during the safety briefing were invaluable in the rolling seas, and really helped with our confidence during the crossing.” Her comments typical of the appreciation for the help and advice offered before this first Channel crossing.
“We all arrived at Port Chantereyne at near enough the same time to be greeted by the sunny smiles and yellow shirts of the WCC team, ready to take lines and point us towards the bar.” Said Pete from Legato.
After a good night's sleep, Sunday saw crews explore the quaint French town of Cherbourg, and enjoy one another's company with evening drinks on the terrace bar overlooking the port. Now with the hardest part done, crews can relax a little and savour their success in pushing themselves that bit further.
Ian and Sarah from Reflections, another of the six crews sailing two-up commented “The crossing was a huge confidence boost for the both of us; we knew we had the ability but lacked the confidence to go somewhere new.  World Cruising Club do all the paperwork which means we can truly relax on our holiday cruise.”
Over the rest of this week, the cruisers will be heading on to explore Guernsey and Alderney before on overnight passage back to the Solent. Each leg of the rally combines sailing in company with social activities and site-seeing ashore. The rally will end back in Haslar Marina, Gosport on Sunday 20 August.