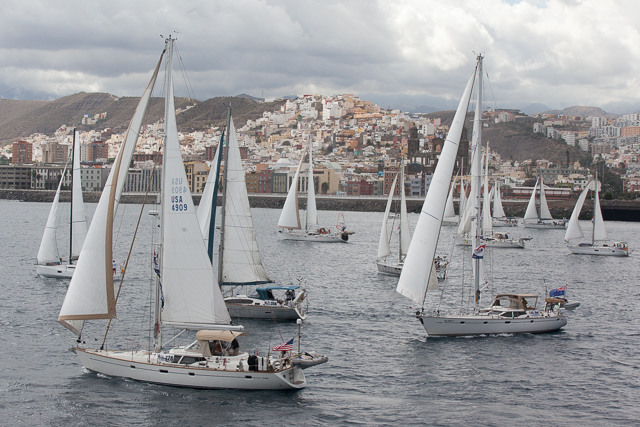 The start of the ARC+ 2016. Photo World Cruising Club.

07/11/2016
The fourth edition of ARC+ Cape Verde set sail from Las Palmas de Gran Canaria today, Sunday 6 November, bound for Mindelo in Cape Verde. During the course of a glorious morning of sunshine, boats paraded out of the marina towards the starting area, ready for leg one of this two stage Atlantic crossing. Rain clouds gathered shortly before the start accompanied by a light, variable breeze but over the coming days the largest ever ARC+ fleet of 72 boats are set to enjoy some textbook tradewind sailing as they sail south to the island of São Vicente.
The ARC+ Cape Verde route option is part of the 2016 Atlantic Rally for Cruisers and was introduced for the first time in 2013 to give sailors in the world's most popular transocean rally a choice of routes across the Atlantic. ARC+ sees the fleet sail to the Cape Verdes, and following the 3-5 day stopover in Mindelo, the yachts will re-group and head off across the Atlantic on 16 November bound for Rodney Bay, Saint Lucia.
This year there are boats registered from 19 countries around the globe including Australia, Belgium, Canada, Chile, France, UK, Germany, Italy, Norway, Spain, Sweden, and USA. Crew on board represent 24 different nationalities and are aged from 3 to 75 years old.
ARC+ has been exceptionally popular with family boats crossing the Atlantic this year with 15 children under the age of 16 taking part. Regular ARC mascot 'Ed the Iguana' will make his annual ocean crossing with Lotti Heathcote the crew of Alderman (GBR).
During their time in Las Palmas, crews have enjoyed a pre-departure programme of seminars, safety inspections and social functions. “We've enjoyed some fantastic hospitality here in Gran Canaria, and it will be a shame to lose these views,” said Colin Charles from the crew of Fleet II before setting off, “We're as ready as we'll ever be, fully provisioned and raring to go. The high seas and some sailing await!” The camaraderie and friendships that have developed between ARC+ sailors were particularly evident today as they slipped their lines to head to the start line and waved their goodbyes to their fellow ralliers. The music blasted out across the marina, creating a party atmosphere as the boats head to sea.
First boats to cross the start line
As forecast, winds were light in the starting area and developing rain squall approached as the countdown signal was given from the committee vessel, Miguel de Cervantes. At 12:45, 11 boats in the multihull division were lead over the line by Cat'leya, a French Lagoon 52 SporTop crewed by five friends and Denis the dog. In true ARC fashion, and no doubt confident of light conditions, the cockpit table was laid for lunch on this spacious catamaran! Other multihull sailors were keen to display the advantages of two hulls, with the crew of Soul Mate proving that you can bounce on a trampoline for an ARC start in an energetic send-off wave to the start line boat. A wind shift shortly before the start of the Cruising Division at 13:00 local time provided a west-northwest breeze of 8-10knts on the edge of the rain shower. The monohulls received a gentle push away from the island, leaving the city of Las Palmas de Gran Canaria in their wake. Oyster 56 Sea Flute was first across the line, fast reaching in company with Jennifer (Oceanis 55) and Go Beyond (Sun Odyssey 42).
The fleet is are now on their way to Mindelo, 865NM to the southwest of Gran Canaria. Locally around Gran Canaria the boats will have light SW winds, whilst by tomorrow morning, the weather forecast suggests northerly winds will become more established as the boats head south, giving the boats a smooth introduction of ocean sailing and time for crews settle into life on board.  ARC+ Rally Control expect to be welcoming the first arrivals in four days' time and the smaller boats, often with double-handed crews should all arrive in good time to enjoy a few days of exploration and relaxation before tackling the longer Atlantic stage to Saint Lucia in the Caribbean.
The latest YB Tracking Satellite trackers have been fitted on board each boat, allowing family and friends to follow the fleet from the comfort of their own home via the online Fleet Viewer and YB Races app. Boats can also send blogs and photos, posted on to the rally website to share life on board.
A busy schedule begins for the ARC fleet
As the ARC+ fleet left today, the pre-departure programme has only just begun for the crews of the ARC fleet sailing directly to Saint Lucia on 20 November. After a spectacular welcome party hosted by the Las Palmas City Council on Friday night, crews have spent the weekend exploring Las Palmas, and many headed out to wave off the ARC+ fleet.
Before their own start two weeks from today, ARC Crews can look forward to a full programme of preparation seminars and social activities.  Safety inspections are already underway and during the next two weeks, there are seminars run daily covering useful topics for ocean sailing including provisioning, communications, weather and sailing techniques. Fully preparing crews for the voyage is an important part of the ARC programme in Las Palmas and the experienced team of 'yellow-shirts' from World Cruising Club provide invaluable advice to help participants prepare for their own start day.