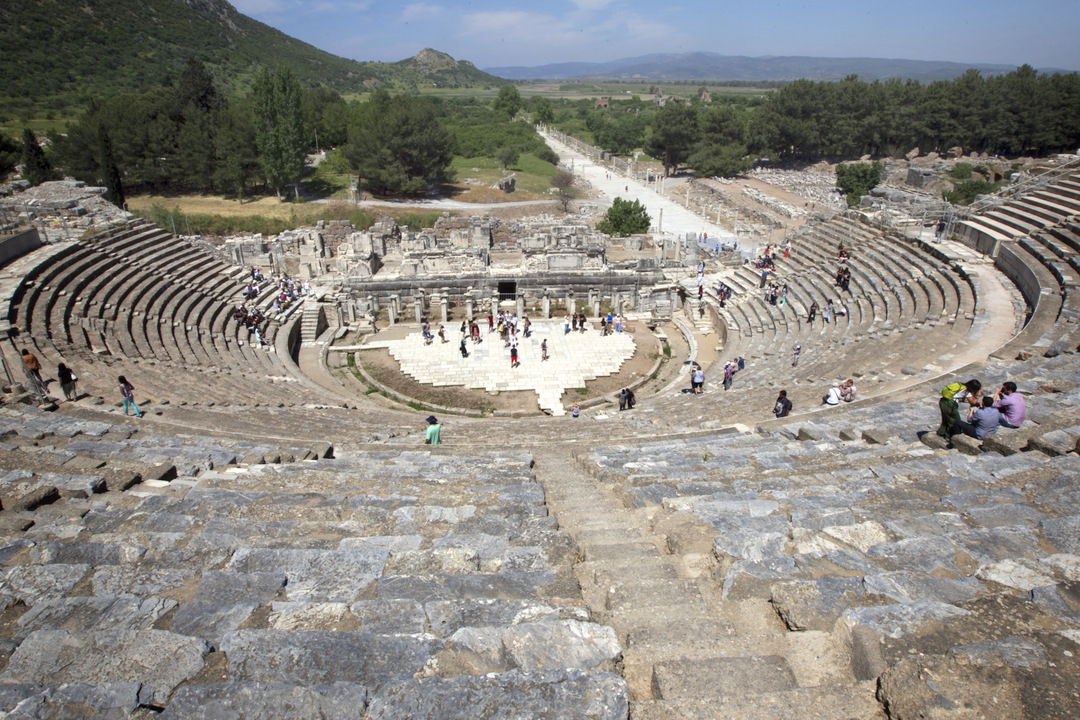 Ruins of the ancient Greek city of Ephesus. Photo by Ella Rubeli/Fairfax

The mid-point on our journey along the west coast of Turkey, modern day Kusadasi, is unfortunately dominated by modern day tourism and is not really very pretty. The harbour can handle four or five cruise ships at a time, and they disgorge their hapless thousands onto waiting buses so they can visit the nearby ancient city of Ephesus. Here they roll in massive wads of humanity down the hill through 3,000 years of civilization.

Actually this excursion is a ‘must do’, but it takes some planning and time management. It is important to get to Ephesus at the right time of day and in a small group – so as to appreciate what life must have been like in in this extraordinary place during ancient times.

For example the apartments still being excavated have marble wall tiles one metre square, cut millimeter perfect. This begs the question – how did they cut those slabs with that accuracy? “With silk thread and water”, came the reply. Then my imagination went wild as I pondered the delivery time for an order of 2,000 tiles. Twenty years might have been the answer but I guess time was something they had more of in those days!

Inland from Selcuk, where Ephesus is located, is the Greek town of Sirince, (pronounced Sirenchee). It was evacuated in 1924 when the remaining Byzantium Greeks were invited to pack what they could carry and given 24 hours to leave Turkey. Fortunately they took their wine making expertise with them to Thessaloniki, improving the Greek wines enormously.

Further along the coast our gulet will pass through the spectacular Straits of Samos. Here the Turkish military still look through binoculars at the Greeks across the straits, looking at them through binoculars from the shores of the Greek island of Samos

We will then come to the ancient Greek theatre of Miletus which appears to pop out of the flat featureless countryside. A breathtaking experience is to walk out onto the theatre stage surrounded by 60 rows of seats. Imagination runs wild – “I’m fighting Gladiatorus today”, or perhaps you’ll be offering a recital of Homeric poetry to the 3,000 seated guests.

The towns along this shore had their own ports in bygone days and it was the silting of those ports and the accompanying mosquito plagues that led to their abandonment and the following transition from rock into rubble with the passage of time.

The terminus for the gulet trip is magnificent Bodrum. Famous in ancient times for the seventh wonder of the world, the Mausoleum of Halicarnassus, but today dubbed the Saint Tropez of Turkey. Many ruins still remain in the surrounds but there is little of the mausoleum to see today as the Knights Hospitalier used much of the stone to build the castle of St. Peter. The castle, however, stands sentinel over the modern harbor, which is home to the biggest gulet fleet in Turkey.

Traditional Turkish gulets are crafted from timber and built largely without the use of paper plans. They offer an extension of the Turkish experience on the water. The accommodation, decoration, music, food and wine are all distinctly Turkish, as by this time you will have discovered after ten days cruising the coast on the luxury gulet we have chosen for this event.

St Peter’s castle has been converted to a museum and Australian Chris Drum, with her Turkish husband Pahadir Berkaya, will host our tour of this unique museum. Pahadir, an underwater archaeologist, was involved from the time of the discovery of the wrecked trading vessel on the sea floor to its transfer and set up in the museum. He is modest but passionate about his country and the history of this coastline.

After the final night dinner perhaps finish with a nightcap at a bar on the way back to the gulet. I remember on the waterfront a bar named ‘Blue’ near to the castle, where we joined a group of vacationing Turkish sea captains playing traditional Turkish music non-stop until the approach of dawn!

The story of ancient Turkey will be told on board the gulet by our own very experienced guide, Yavuz Ozdeniz. He is an avid student of the subject for over 30 years, but you will hear the story in many episodes, in small groups, or in one on one conversations, perhaps as you gaze across the sea to the setting sun from the deck of the gulet.